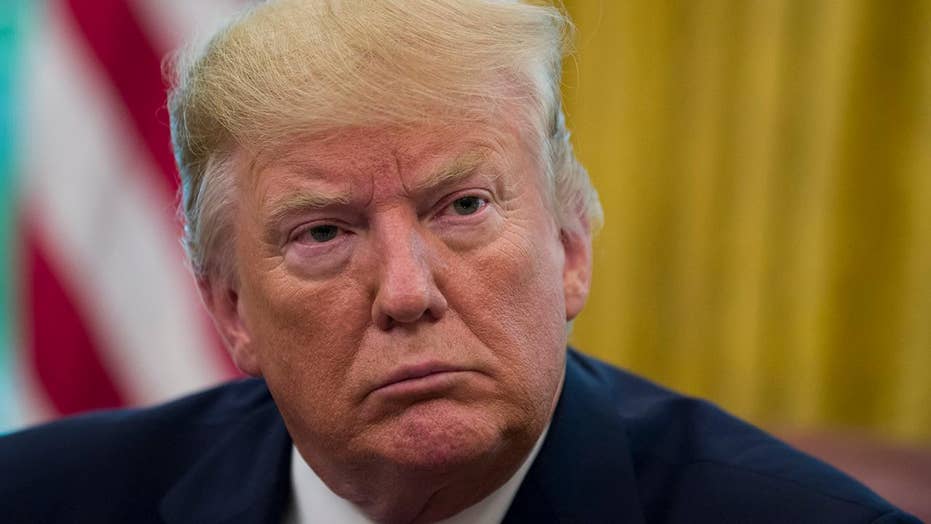 Is an executive order coming from Trump on the census citizenship question?

House Oversight Committee ranking member Rep. Jim Jordan argues that everyone is behind the 'common sense' move except the Democrats.

President Trump teed off on the news media in a bizarre Twitter rant Thursday morning ahead of a big social media summit at the White House slated for later in the day.

The string of tweets attacked the news media and claimed the industry would go out of business when he leaves office, even suggesting outlets would be forced to endorse him this cycle for the sake of their own survival.

He went on to alternately praise himself, lob insults at familiar targets in the 2020 Democratic field and even joke about serving more than two terms.

“The White House will be hosting a very big and very important Social Media Summit today. Would I have become President without Social Media? Yes (probably)! At its conclusion, we will all go to the beautiful Rose Garden for a News Conference on the Census and Citizenship.” Trump began. “A big subject today at the White House Social Media Summit will be the tremendous dishonesty, bias, discrimination and suppression practiced by certain companies. We will not let them get away with it much longer. The Fake News Media will also be there, but for a limited period.”

He continued: “The Fake News is not as important, or as powerful, as Social Media. They have lost tremendous credibility since that day in November, 2016, that I came down the escalator with the person who was to become your future First Lady,” Trump tweeted. (The president apparently confused his dates, as the escalator ride he referenced happened in June 2015 when he announced his presidential bid.)

“When I ultimately leave office in six years, or maybe 10 or 14 (just kidding), they will quickly go out of business for lack of credibility, or approval, from the public. That’s why they will all be Endorsing me at some point, one way or the other.”

Thursday's tweet was not the first time the president joked about staying in office past the two-term limit. Last month, Trump tweeted a video about running "4eva."

The president went on Thursday to slam 2020 Democratic presidential contenders, deploying his nicknames for former Vice President Joe Biden, South Bend Mayor Pete Buttigieg and Sen. Elizabeth Warren -- and suggesting the country would rather have him as president, as he praised his own physical and mental attributes.

“Could you imagine having Sleepy Joe Biden, or Alfred E. Newman or a very nervous and skinny version of Pocahontas (1/1024th), as your President, rather than what you have now, so great looking and smart, a true Stable Genius!” Trump tweeted. “Sorry to say that even Social Media would be driven out of business along with, and finally, the Fake News Media!”

The president’s Twitter screed comes as his social media account has been in the headlines. A federal appeals court decision this week said Trump is no longer allowed to block people on Twitter over statements he does not like.

The 2nd Circuit Court of Appeals noted that because Trump uses Twitter to communicate with the public about his administration, and his account is open to the public for people to comment on his posts, it warrants constitutional free speech protection under the First Amendment.

“We do conclude,” the opinion said, “that the First Amendment does not permit a public official who utilizes a social media account for all manner of official purposes to exclude persons from an otherwise‐open online dialogue because they expressed views with which the official disagrees.”

According to court documents, Trump admitted that he blocked the plaintiffs in the case in 2017 after they posted tweets that “criticized him or his policies.” Once they were blocked, they were no longer able to view Trump’s tweets while logged in, and no longer had access to reply to tweets or view comment threads on Trump’s Twitter page.