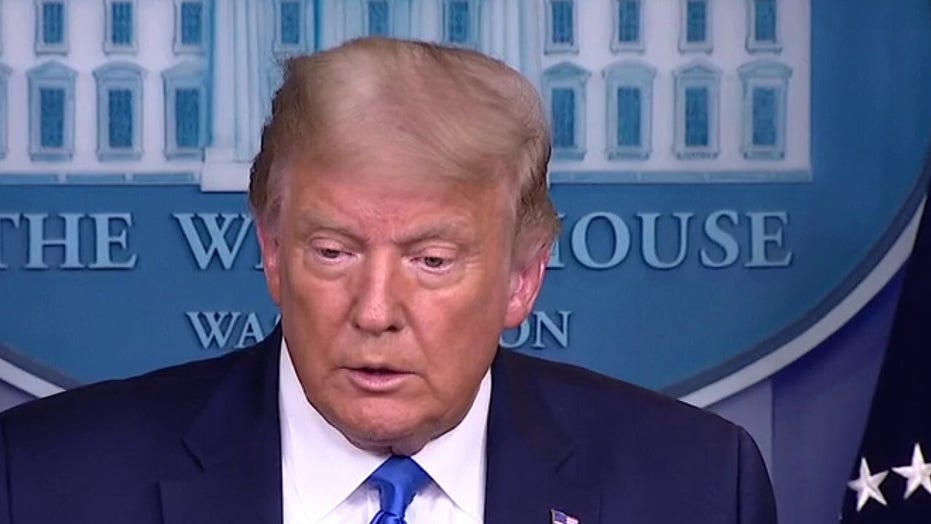 President Trump on Wednesday praised Kentucky’s Democratic Gov. Andy Beshear for calling in the National Guard just hours before two police officers were shot during protests after a grand jury decision in the Breonna Taylor case.

“I will be speaking to the governor, we have a call scheduled,” Trump said during a press briefing at the White House. “I understand he's called up the National Guard. That's a good thing. It’ll all work out.”

Trump had said earlier that he didn't know enough about the case to comment, but he said later that he'd since been briefed.

When asked earlier what his message was to the Black community who felt "justice had not been served," he pivoted to his record. He has said that he loved the Black community and that he has done more for Black Americans than any other president with the exception of Abraham Lincoln.

Officer Brett Hankison, who was fired in June, was indicted on three counts of wanton endangerment in the first degree for shots that were fired into a neighboring apartment, a Jefferson County grand jury decided Wednesday. Neither the grand jury nor the presiding judge elaborated on the charges.

A warrant has been issued for Hankison's arrest and a bond is set at $15,000 cash. Hankison faces up to five years on each count if convicted.

The indictment was announced 194 days after Taylor, a 26-year-old Black emergency medical worker, was shot five times by the officers who entered her home using a no-knock warrant during a narcotics investigation on March 13.

"The decision before my office as the special prosecutor, in this case, was not to decide if the loss of Ms. Taylor's life was a tragedy. The answer to that is unequivocally, 'yes,'" Cameron said. "I understand that Breonna Taylor's death is part of a national story, but the facts and evidence in this case are different than others."

Louisville police reported on Wednesday night that two police officers had been shot amid protests.

A spokesman for the Louisville Metropolitan Police Department issued a brief statement Wednesday night saying “We currently have an officer shot. We'll update when we can."

The statement did not elaborate on the condition of the officers or the circumstances of the shooting.

That development came amid a fast-changing scene in Louisville, where police had earlier fired flash bang devices to clear demonstrators from a downtown square Wednesday evening. The protesters had gathered there to protest a grand jury’s decision to not indict police officers on criminal charges directly related to Taylor’s death.