Trump tries to close the deal for GOP in battleground states

In the final hours of the midterm campaign, Republican leaders appealed to the president to focus on the economy and dial back on the harsh immigration rhetoric. John Roberts reports for 'Special Report.'

To some Republicans' chagrin, President Trump has openly embraced Democrats' efforts to cast Tuesday's midterm elections as a referendum on his record and political clout, a kind of ultimate test after a bruising midterm season that saw many of his hand-picked candidates surge to victories in key primaries.

Election Day marks voters' first nationwide opportunity to react not only to Trump's tenure, but also to the slew of recent developments that have reverberated in the public consciousness, including the deadly mass shooting at a Pittsburgh synagogue, the swelling migrant caravans making their way to the U.S. border with Mexico, and the mail bombs sent to prominent liberals by an outspoken supporter of the president.

"In a sense, I am on the ticket,” Trump told a raucous election-eve rally in Ohio, one of three he held in the final hours before Election Day. "The midterm elections used to be, like, boring, didn't they?" he added. "Do you even remember what they were? People say midterms, they say, 'What is that, what is it,' right? Now it's like the hottest thing."

Trump has held 26 rallies since October as he criss-crossed the country, boosting not only local candidates but also his own stake in Tuesday's vote. In Mississippi in October, Trump urged supports to imagine they could vote for him when they head into the voting booth: “I'm not on the ballot, but in a certain way, I'm on the ballot. I want you to vote. ... Pretend I’m on the ballot.”

At an airport in Indiana ahead of another Monday evening rally, Trump simultaneously seemed to downplay his role while also expressing an eagerness to bear the responsibility for his party's performance on Tuesday.

"It's really about the candidate, but if they want to give me the credit or the liability, I'll be willing to take it," Trump told reporters.

Over the past several months, Trump has unabashedly taken credit for the big wins enjoyed by several Republican candidates throughout this year's primary season, which often came directly after his endorsement.

Georgia Secretary of State Brian Kemp, who is locked in a tight gubernatorial race against Stacey Abrams, had surged ahead of Lt. Gov. Casey Cagle only after he secured Trump's backing. Similarly, Republican John Cox secured a spot on Tuesday's ballot in California's gubernatorial race when Trump urged the party to coalesce behind him.

Perhaps the most stunning example of Trump's influence unfolded on June 12 in South Carolina, when Trump-bashing Rep. Mark Sanford was unseated by Katie Arrington. As voters headed to the polls, Trump tweeted that "Sanford has been very unhelpful to me in my campaign to MAGA" and called him "MIA and nothing but trouble." 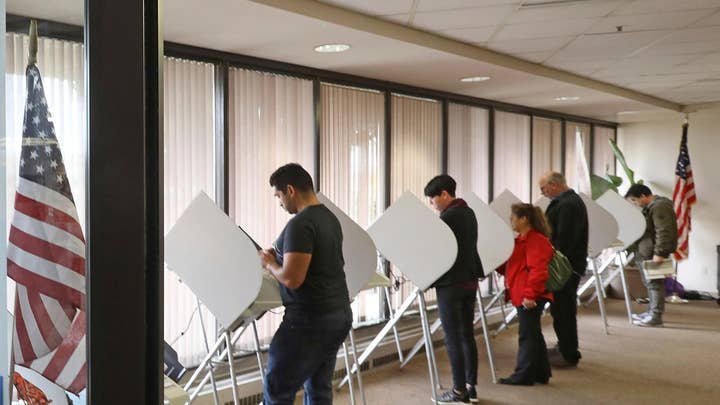 "When I decided to go to Ohio for Troy Balderson, he was down in early voting 64 to 36," Trump tweeted. "That was not good. After my speech on Saturday night, there was a big turn for the better. Now Troy wins a great victory during a very tough time of the year for voting. He will win BIG in Nov." (Fox News currently rates Balderson's bid for Ohio's 12th Congressional District as lean Republican.)

TRUMP ANNOUNCES PLAN TO DENY ASLYUM-SEEKERS WHO DON'T ARRIVE AT PORT OF ENTRY, IN APPARENT ATTEMPT TO REJECT MANY CARAVAN MEMBERS

But as voters head to the polls, some Republicans are suggesting that Trump's fiery, immigration-focused messaging may have derailed the GOP's electoral chances in some key races. And Trump himself seemingly acknowledged that, despite his efforts, his party is looking at long odds in several congressional races.

Last week, Trump rebuked House Speaker Paul Ryan, R-Wis., and told him that he "should be focusing on holding the Majority" rather than challenge his proposal to end birthright citizenship -- which was widely seen as an effort to cast some blame on Ryan if Democrats retake the lower chamber.

Last Friday's jobs report showed the unemployment rate holding steady at 3.7 percent, the lowest it has been in nearly 50 years, and that employers added roughly 250,000 jobs in October. Consumer confidence is at record-high levels. In an exclusive Fox News op-ed published Monday, Trump focused extensively on the economy, which he called "red-hot" and "the envy of the world."

At times, though, Trump has appeared unwilling to discuss those figures publicly.

"Sometimes it’s not as exciting to talk about the economy because we have a lot of other things to talk about," Trump said at a rally Wednesday night in West Virginia. He proceeded to discuss the migrant caravan and birthright citizenship -- more contentious issues that analysts say may turn off some moderate voters.

"Does that bring a single person to the polls? Is it moving any undecided voter — toward you, anyway?" Americans for Tax Reform President Grover Norquist asked, in an interview with The Washington Examiner. "Immigration is not a consensus issue within the current Republican Party because so many Republican voters are immigrants."

In an interview with The Los Angeles Times on Monday, former House Speaker Newt Gingrich said Trump "owns the Republican Party even more than Reagan" -- and he's wielding that historic influence accordingly.

"He has polarized the election on the issues he believes in, on his terms, despite the news media," Gingrich said. "You can argue whether or not it’s the right gamble. But it’s his gamble.”

The White House said early Tuesday that Trump will be eagerly watching to see if that gamble has paid off.

“After 11 rallies in 8 states and weeks of campaigning for Republican candidates, the President will spend today making phone calls, monitoring Congressional, Senate and Gubernatorial races across the country and meeting with his political team for real-time updates," White House press secretary Sarah Sanders said in a statement. "Later this evening the President and First Lady have invited family and friends to join them in the residence as they watch election returns.”