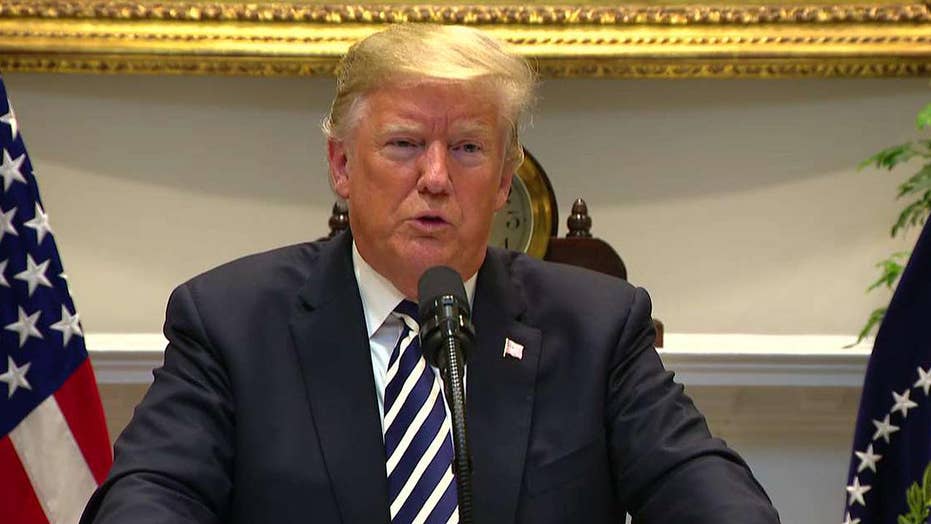 President Trump announced in a lengthy speech at the White House on Thursday afternoon that, in response to what he called the "crisis at our southern border" and a surge of fraudulent asylum claims in recent years, his administration will soon require asylum-seekers to "lawfully present themselves" at a port of entry.

The move appeared designed to prevent many members of the leading Central American migrant caravan -- which now numbers approximately 4,000, down from a high of 7,200 -- from making asylum claims if and when they reach the U.S. border. Asylum claims made by migrants caught crossing the border illegally would seemingly be summarily denied under Trump's proposal.

The asylum clause of the Immigration and Nationality Act says that anyone who arrives to the U.S. may apply for asylum based on a well-founded fear of persecution, and Trump's decision was likely to prompt immediate federal court challenges.

In his remarks, Trump called the thousands of migrants in the approaching caravans from Central America "not legitimate asylum-seekers" because most of them have not decided to remain in Mexico and pursue asylum there. "Asylum is not a program for people living in poverty," he said.

The president also issued something of a warning to members of the caravan, including those who reportedly threw rocks at members of the Mexican police this week.

Asked by a reporter to clarify if U.S. troops might fire on the caravan, Trump responded, "I hope not, I hope not -- but it's the military."

The president's statement marked his latest major policy pronouncement on illegal immigration with just days to go before the Nov. 6 midterm elections, following his decision to send thousands of troops to the U.S. border and his push to end birthright citizenship, which he said could be accomplished by executive order.

Trump said Thursday he would issue a "comprehensive" executive order next week on immigration matters, including his asylum plan.

"If these caravans are allowed into our country, only bigger and more emboldened caravans will follow -- and you see that's what's happening now," Trump said.

In a statement, Omar Jadwat, the director of the ACLU’s Immigrants’ Rights Project, condemned the president's announcement.

"If he plans at some point to prohibit people from applying for asylum between the ports of entry, that plan is illegal," Jadwat said. "What is clear from the timing and vague nature of today’s remarks is that he is simply trying to inflame his base in the final run-up to the midterms.”

Trump and other administration officials have long encouraged those seeking asylum to come through legal ports of entry. However, many migrants may be unaware of that guidance, and official border crossings have grown increasingly clogged.

Immigration officials have turned away asylum-seekers at ports of entry citing overcrowding, telling them to return at a later date. Backlogs have grown especially bad in recent months at crossings in California, Arizona and Texas, with people typically waiting five weeks to claim asylum at San Diego's main crossing and sleeping out in the open for days at a time.

A woman holding her baby hitches a ride on the fender of a tanker in Niltepec, Mexico, on Tuesday. (AP)

Migrants who cross illegally are generally arrested and often seek asylum or some other form of protection. Claims have spiked since 2010, and there is currently a backlog of more than 800,000 cases pending in immigration court.

Detention facilities are also nearly at their maximum capacity; Trump on Thursday said more are being constructed, and that illegal immigrants will be held in "massive cities of tents."

Administration officials have railed against what they say are loopholes designed to encourage people, especially from Central America, to come to the U.S. and claim asylum. On Thursday, Trump said human trafficking -- in which "the lowest scum on Earth ... steal children" -- has hit unprecedented levels, in part because of lax asylum policies.

"We will not allow our generosity to be abused by those who would break our laws, defy our rules, violate our borders, break into our country illegally -- we won't allow it," Trump said. "Mass uncontrolled immigration is especially unfair to the many wonderful law-abiding immigrants already living here, who followed the rules and waited their turn."

Once illegal immigrants apply for asylum, even if their claims are fraudulent, they previously have been allowed into the U.S. pending the adjudication of their asylum claims -- which require a credible fear of imminent persecution based on a limited number of factors, such as political or religious belief, in order to be upheld. 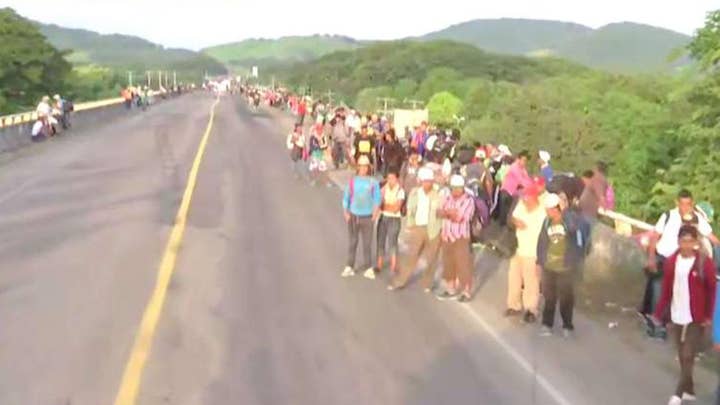 Most asylum claims often fail to meet this high legal standard after they are reviewed by aslyum judges, and only about 20 percent of applicants are approved.

"They never show up at the trials," Trump said, referring to people who claim asylum and then are released into the country. "They never come back, they're never seen again."

ASYLUM CLAIMS OVERWHELM U.S. SYSTEM -- A LOOK AT THE NUMBERS

The president also emphasized that children were separated from their parents at the border under President Obama's administration -- although those separations occured with less frequency than they did under the Trump administration's zero-tolerance policy, which dramatically ramped up the criminal prosecutions for illegal border crossers that had legally necessitated the separations. Trump has since signed an executive order to keep parents and children together after they're caught illegally crossing the border.

Trump's comments came hours after the leading caravan trying to make its way to the U.S. border failed in its efforts to convince the Mexican government to offer dozens of buses to speed up their journey northward.

On Thursday, Trump again characterized the caravan as an "invasion" that has "overrun the Mexican police -- and hurt, badly, Mexican soldiers. ... They're wasting their time. They should turn back now."

The caravan initially totaled more than 7,000 people, but its numbers have dwindled as thousands have either applied for asylum in Mexico or returned to Honduras.

A second, smaller group of 1,000 or so migrants is more than 200 miles back. A third band of about 500 from El Salvador has made it to Guatemala, and a fourth group of about 700 set out from the Salvadoran capital Wednesday.

At a rally Wednesday in Fort Myers, Fla., Trump charged that the leading incoming caravan represents a security threat. "They got a lot of rough people in those caravans -- they are not angels. They are not," he said. 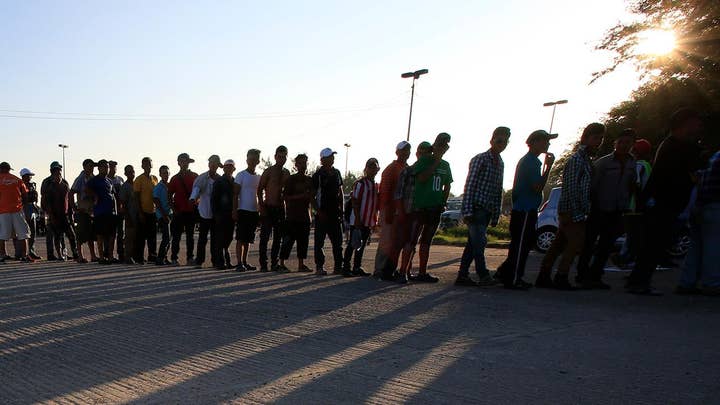 Trump has said that up to 15,000 U.S. troops could be deployed to the border if the caravan continues its approach. The Pentagon noted Wednesday afternoon that its initial estimate was for 7,000 troops at the border.

The president also has sparred with some in his own party, including outgoing House Speaker Paul Ryan, R-Wis., over Trump's proposal to end birthright citizenship, which allows children of illegal immigrants to automatically become U.S. citizens if born within the country's borders.

"Illegal aliens are not subject to the jurisdiction of the United States," Trump said to applause at Wednesday's rally, to chants of "U-S-A!"

Some Republicans are advancing the theory that illegal immigrants are not "subject to the jurisdiction" of the U.S. within the meaning of that provision, which would give Congress the legal daylight to pass a law codifying Trump's view, modifying the current Immigration and Naturalization Act (INA) of 1952 and ending birthright citizenship.

While an 1898 Supreme Court case appears contrary to that view, the issue has not been tested in the courts in modern times, and Republicans are newly emboldened by the 5-4 conservative majority on the Supreme Court.

Still, Trump's suggestion that he could legally bypass Congress and simply issue a unilateral executive order to enact his proposed change was "obviously" incorrect, Ryan said this week.

That prompted Trump to fire back on Twitter and charge that Ryan "knows nothing about the issue." The president also said Ryan should "focus on holding the Majority" -- a nod to polls showing that Republicans face tough odds to retain control of the House after the Nov. 6 midterm elections.

Trump also followed up with a clip of a 1993 speech from former Nevada Democratic Sen. Harry Reid, in which he claimed that "no sane country" would have birthright citizenship. Reid reversed his position in 1999, under pressure from union groups.