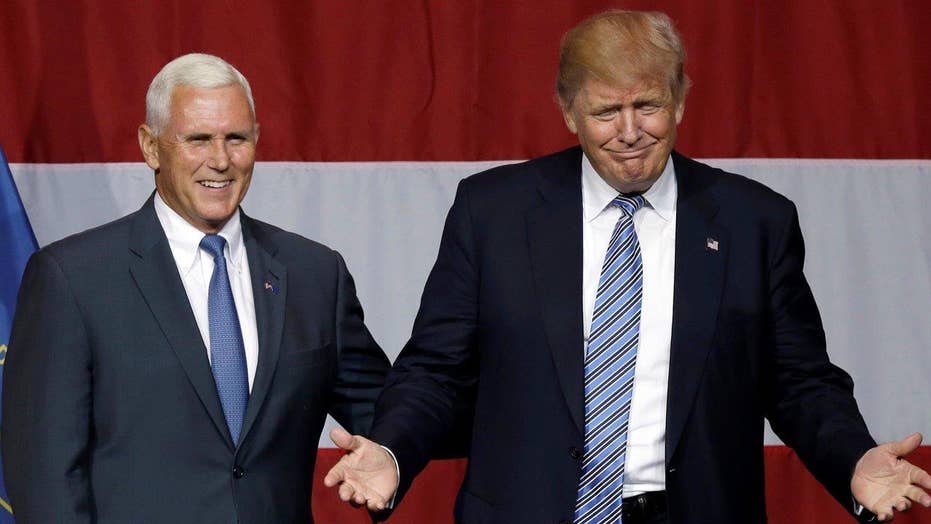 Donald Trump put to rest Friday the speculation and revealed the worst-kept secret in Washington: Indiana Gov. Mike Pence will be his running mate.

The presumptive Republican presidential nominee made it official with a tweet:

Pence responded that he was "honored."

Trump had originally planned to roll out his pick at a news conference in New York on Friday, but postponed the event because of the terror attack in Nice, France. Per his tweet, that event will take place Saturday morning.

While the initial postponement of Trump's announcement fueled speculation that he might be having second thoughts, it was widely expected that Pence was in line for the job.

The Pence pick follows a very-public vetting process that included meetings in recent days with Pence, New Jersey Gov. Chris Christie and former House Speaker Newt Gingrich, among others. The selection of Pence, who went from dark horse to leading contender in a matter of days, presumably is aimed at galvanizing support from the party’s conservative base as Trump charges into the Republican nominating convention.

Pence was selected from a slimmer-than-usual short-list -- of candidates not only favored by Trump but also willing to stake their political future on the unconventional and unpredictable White House contender. Several prominent names publicly took themselves out of the running.

But he moved almost immediately to the top of the list, considering he gives the Trump campaign much-needed social conservative credentials without the kind of political baggage that Democrats had hoped to exploit in other finalists like Christie or Gingrich.

Consideration of Pence also put Trump on the clock. Pence faced a Friday deadline to file paperwork to appear on the official state ballot as either a gubernatorial or vice presidential candidate. Under state law, his name could not appear on the ballot twice. Fox News learned Thursday Pence would not seek re-election, a clear sign he was gearing up for the VP announcement. And on Friday, he filed the paperwork to withdraw.

The Hillary Clinton campaign quickly unloaded on Trump’s decision, calling him “the most extreme pick in a generation.”

“By picking Mike Pence as his running mate, Donald Trump has doubled down on some of his most disturbing beliefs by choosing an incredibly divisive and unpopular running mate known for supporting discriminatory politics and failed economic policies that favor millionaires and corporations over working families,” campaign Chairman John Podesta said in a statement.

Pence, now in a tough re-election bid, spent 12 years in Congress including as the leader of the House Republican Conference.

While Democrats are hammering his Tea Party ties in Congress, the 57-year-old Pence also could help Trump with critical fundraising, considering the Trump campaign has roughly $1.3 million in the bank as of the last filing, compared with Clinton, whose campaign has $42 million and a network of donors assembled through her lengthy career in politics.

Pence’s deputy chief of staff was a former spokesman for Koch Industries and his chief of staff in Congress later ran the Koch brothers’ political umbrella organization.

The original law, which he signed, allowed residents and companies being sued by a private party to cite their religious beliefs as a defense. However, critics argued the law would allow discrimination against gays and others.

The national and widespread criticism was so damaging it forced Pence and the state legislature to revise the law to clearly prohibit businesses from denying services to customers based on their sexual preference or gender choice. And it appeared to end Pence’s 2016 presidential aspirations.

But he was considered for VP at a time when many Republicans are steering clear of the Trump campaign and national convention. The usual clamoring to be considered for running mate didn’t happen this year, in part because potential candidates were concerned about Trump’s stances and comments, particularly on immigration, women, Mexicans and Muslims.

However, both dropped out earlier this month. Corker declined after appearing with Trump at only one campaign event.

Pence, a Catholic, earned a law degree from Indiana University in 1986 and ran two unsuccessful congressional campaigns before getting elected in 2000.

While in Congress, he opposed President George W. Bush’s No Child Left Behind policy, warning it would grow the federal government. In 2006, he unveiled a “no amnesty” immigration plan that called for increased border security and other measures but it did not pass. He also pushed to cut off federal funding to Planned Parenthood and opposed closing the Guantanamo Bay detention camp.

Though Pence ascended the House ranks to eventually become part of the chamber’s GOP leadership, he lost a bid in 2006 to then-Ohio Rep. John Boehner to become the chamber’s GOP minority leader. Pence passed on the opportunity to run for Senate in 2010, then made trips to early-voting states Iowa and South Carolina, which fueled speculation that he would run for president, until he launched his bid for governor in May 2011.

“Pence is a through-and-through conservative,” said Caleb Burns, a Republican strategist and partner in the Washington law firm Wiley Rein, adding Pence could “energize the workhorses of the party.”

He said: “Given the options, Pence was the really the only one who delivered any amount of value to the campaign. … There was no real contingency that either Gingrich or Christie would have given you -- neither geographically nor in some pocket of the party.”

Had he not been picked, Pence would have been facing Democrat John Gregg for a rematch of their 2012 gubernatorial face-off which Pence won by a narrow margin; polls this year suggested a rematch would be similarly close.

Trump didn’t meet with Pence and his wife until July 2, at the Trump National Golf Club in Bedminster, N.J.

They appeared together at a rally in central Indiana, then at a Trump high-dollar fundraiser in Indianapolis – before Trump ultimately made his choice.