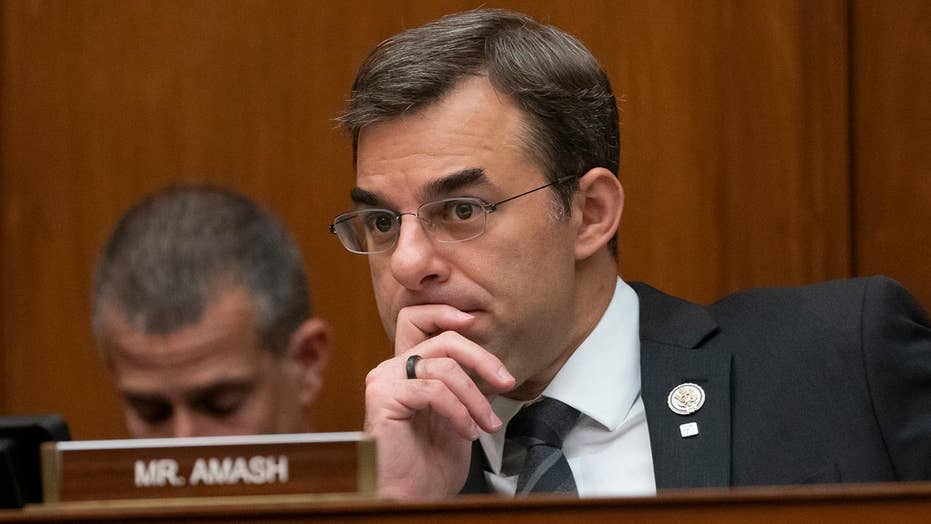 President Trump on Wednesday mocked Rep. Justin Amash for exploring a Libertarian Party presidential run against him, saying he thinks the congressman would make a “wonderful” candidate as he “has no chance” of keeping his seat in the House.

“No, I think Amash would make a wonderful candidate, especially since he is way behind in his district and has no chance of maintaining his Congressional seat,” Trump tweeted Wednesday. “He almost always votes for the Do Nothing Dems anyway.”

He added: “I like him even more than Jill Stein!”

Stein was the Green Party's nominee for president in 2012 and 2016, when Trump defeated Hillary Clinton in the election. Some Democrats have claimed Stein, a liberal, took votes away from Clinton in that race. It's unclear what sort of effect an Amash third-party candidacy would have on the 2020 race.

The president’s tweet comes just a day after Amash, a former Republican turned independent representing Michigan’s third district in the House of Representatives, launched an exploratory committee on Tuesday to seek the Libertarian Party’s nomination in the 2020 presidential race.

“We’re ready for a presidency that will restore respect for our Constitution and bring people together,” he wrote on Twitter. “I’m excited and honored to be taking these first steps toward serving Americans of every background as president.”

Amash also retweeted a new campaign account that posted a Constitution-inspired graphic that stated: “A new candidate has appeared.”

“For a government that secures our rights. For equality before the law. For an end to cronyism,” the site read.

Amash is a libertarian-conservative and has frequently criticized the president and his administration. Amash left the Republican Party last July. He voted in support of articles of impeachment against the president in December.

Amash had a high 88 rating from the American Conservative Union (ACU) in 2018, up from 78 in 2017. The group's Federal Legislative Ratings scores members of Congress based on how they vote in line with conservative principles.

Fox News’ Adam Shaw, Gregg Re and Marisa Schultz contributed to this report.