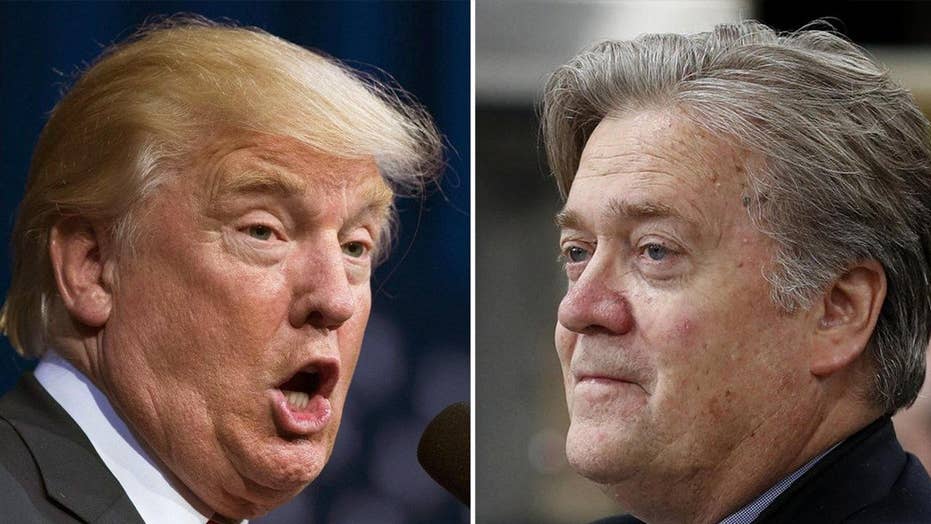 The letter is a response to sharply critical comments that Bannon reportedly made to journalist Michael Wolff about Trump’s campaign and leadership.

Charles Harder, Trump’s attorney, charges in the letter that Bannon violated a non-disclosure agreement signed during the campaign by disclosing confidential information, speaking to the media about the campaign and disparaging members of the Trump family.

FLEISCHER: TRUMP STATEMENT LIKE A '2x4 TO THE HEAD' OF BANNON

In a statement Wednesday night, Harder wrote that Bannon’s actions give rise to “numerous legal claims including defamation by libel and slander, and breach of his written confidentiality and non-disparagement agreement with our clients. Legal action is imminent.”

Harder requests in the letter that Bannon cease publishing defamatory or confidential information and immediately begin preserving relevant documents, a standard demand typically made before the commencement of legal action.

"Please confirm in writing within twenty-four (24) hours of the transmission of this letter that the foregoing demands will be, and are being, fully complied with," the letter states.

Bannon told Wolff in an interview that senior Trump officials’ meeting with Russians in Trump Tower in 2016 was “treasonous” and “unpatriotic,” multiple outlets reported.

“[T]hey’re going to crack Don Junior like an egg on national TV,” Bannon added, according to accounts of the interview.

And in excerpts from Wolff’s upcoming book, “Fire and Fury: Inside the Trump White House,” also published Wednesday, Bannon is quoted maligning the Trump campaign’s organization and divulging other details of his time in the White House.

Trump fired back in an official White House statement later in the day.

“Steve Bannon has nothing to do with me or my presidency,” the statement said. “When he was fired, he not only lost his job, he lost his mind.”

“Steve had very little to do with our historic victory, which was delivered by the forgotten men and women of this country,” Trump added. “Yet Steve had everything to do with the loss of a Senate seat in Alabama held for more than thirty years by Republicans. Steve doesn’t represent my base—he’s only in it for himself.”

Bannon appeared on Sirius XM’s Patriot Channel’s “Breitbart News Tonight” late Wednesday and called Trump a “great man.” When asked by a caller about Trump’s comments about him on Twitter, Bannon appeared to shake off Trump’s remarks.

“You know I support him day in and day out, whether going through the country giving the Trump miracle speech or on the show or on the website,” he said.