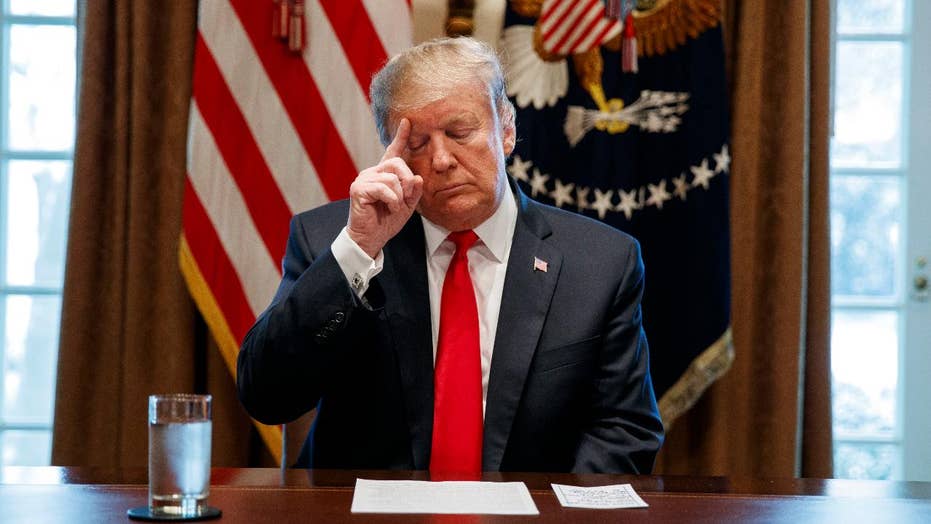 Committee to Defend the President chair Ted Harvey says that he believes the government shutdown and building the wall will be major focal points of Trump’s speech.

In a wide-ranging, three-part interview set to broadcast Sunday, President Trump revealed that U.S. troops will remain in Iraq to "watch Iran," and charged that Democratic House Speaker Nancy Pelosi is "very bad for our country" and "doesn't mind human trafficking" at the border, according to an advance transcript of his remarks.

Speaking ahead of Super Bowl LIII at the Mercedes-Benz Stadium in Atlanta, Ga., Trump also told CBS News' "Face the Nation" that the NFL's ratings have been "terrific" lately because the players "haven't been kneeling" during the national anthem -- and that "a lot of people in the NFL have been calling and thanking me" for spearheading the passage of a sweeping, bipartisan criminal justice reform bill last year.

A social media campaign has urged the Super Bowl halftime performers, including the pop band Maroon 5, to kneel on-stage.

The president's comments offered a possible preview of his upcoming State of the Union address in the House of Representatives, which is now scheduled for Feb. 5 after it was delayed amid a spat between the White House and Pelosi during the partial federal government shutdown.

The government is currently funded through Feb. 15, and Trump has strongly suggested that he may call a national emergency if Congress does not agree to provide some financial backing for his proposed wall along the southern border.

"You know, there have been plenty national emergencies called," Trump told anchor Margaret Brennan. "And this really is an invasion of our country by human traffickers." (“I think there’s a good chance we’ll have to do that," Trump said last week, referring to declaring a national emergency.)

Asked about his showdown with Pelosi, who has vowed that congressional Democrats will never sign off on a wall, Trump offered a blistering critique.

"I think that she was very rigid -- which I would expect -- but I think she is very bad for our country," Trump said. "She knows that you need a barrier. She knows that we need border security. She wanted to win a political point. I happen to think it's very bad politics because basically she wants open borders. She doesn't mind human trafficking or she wouldn't do this."

Should Trump declare a national emergency to build the border wall?

Talk radio host Tony Katz says that the president could face problems down the road if he decides to declare a national emergency to build the border wall.

Trump continued: "She can keep playing her games, but we will win. Because we have a much better issue. On a political basis, what she's doing is -- I actually think it's bad politics, but much more importantly it's very bad for our country."

Senior White House officials have repeatedly told Fox News that declaring a national emergency is on the table. Several existing statutes can authorize the president to order the construction of projects like a border wall for the national defense, using money previous allocated by Congress.

"She can keep playing her games, but we will win."

Separately, Trump doubled down on his criticisms of the intelligence community, which he tweeted this week was "extremely passive and naive when it comes to the dangers of Iran."

His comments came after Director of National Intelligence Dan Coats, CIA Director Gina Haspel and FBI Director Christopher Wray testified on Capitol Hill, and contradicted Trump's assertions that ISIS has been defeated and that North Korea is on a path to removing its nuclear arsenal.

Trump said in the interview Sunday that the intelligence community was wrong to conclude that Iran had been abiding by the nuclear accord it reached with the Obama administration. Trump pulled the U.S. out of the deal last year, and began reimposing devastating economic sanctions against the country.

"I disagree with them. I have intel people, but that doesn't mean I have to agree. President Bush had intel people that said Saddam Hussein, in Iraq, had nuclear weapons --had all sorts of weapons of mass destruction. Guess what? Those intel people didn't know what the hell they were doing, and they got us tied up in a war that we should have never been in. And we've spent seven trillion dollars in the Middle East and we have lost lives," Trump said.

The president stuck to his previous commitment to pull all 2,000 U.S. troops out of Syria, but indicated that he could change his mind quickly. Senate Republicans joined Democrats last week in formally rebuking Trump's Syria policy.

"We'll come back if we have to," Trump said. He added that troops there are currently in the process of coming home or redeploying to Iraq.

"We have very fast airplanes, we have very good cargo planes. We can come back very quickly, and I'm not leaving," Trump continued. "We have a base in Iraq and the base is a fantastic edifice. I mean I was there recently, and I couldn't believe the money that was spent on these massive runways. And these -- I've rarely seen anything like it. And it's there. And we'll be there. And frankly, we're hitting the caliphate from Iraq and as we slowly withdraw from Syria."

Meanwhile, Wisconsin Republican Sen. Ron Johnson, the chairman of the Homeland Security Committee, told "Fox News Sunday" that the president should listen carefully to objections from his fellow Republicans.

"I think it would just be tragic if we bugged out, left the Kurds -- who by large have done the fighting and defeated the ISIS caliphate, the territory and caliphate and ISIS -- if we just abandoned them to the mercy -- and I use that term loosely --of Russian and Iran and possibly Turkey," Johnson said.  "It would just be unconscionable. So again I think Republican senators are sending very strong signals to the president we don’t want to see that happen, and I hope he is listening."

Trump added in the Sunday interview that keeping a small force in Afghanistan, where he has also vowed to draw down troops, remained possible. And in Iraq, Trump said, "we might as well keep" a base of operations there.

"And one of the reasons I want to keep it is because I want to be looking a little bit at Iran, because Iran is a real problem," Trump said.

FILE - In this Oct. 31, 2018, photo, Afghan National Army (ANA) soldiers carry out an exercise during a live firing at the Afghan Military Academy in Kabul, Afghanistan. Trump administration claims of progress in talks with the Taliban have sparked fears even among allies of the president that his impatience with the war in Afghanistan will lead him to withdraw troops too soon, leaving the country at risk of returning to the same volatile condition that prompted the invasion in the first place. (AP Photo/Rahmat Gul, File)

Asked whether he was considering a military attack on Iran, Trump responded, "No, I want to be able to watch Iran. All I want to do is be able to watch. We have an unbelievable and expensive military base built in Iraq. It's perfectly situated for looking at all over different parts of the troubled Middle East rather than pulling up. And this is what a lot of people don't understand. We're going to keep watching and we're going to keep seeing and if there's trouble, if somebody is looking to do nuclear weapons or other things, we're going to know it before they do."

Reacting to the dramatic, predawn arrest of his longtime associate Roger Stone on charges of witness tampering and lying to Congress, Trump distanced himself from the situation.

"First of all, Roger Stone didn't work on the campaign, except way, way at the beginning, long before we're talking about," Trump said.

The president said he has "not thought" about pardoning Stone, adding that "it looks like he's defending himself very well."

Trump also responded to reports that Secretary of State Mike Pompeo might run for Senate in Kansas, saying the top official has no plans to depart.

"I asked him the question the other day. He says he's absolutely not leaving," Trump said. "I don't think he'd do that. And he doesn't want to be lame duck. And he's doing a fantastic job as our secretary of state. Great energy and a great, smart gentleman."

With just hours to go before kickoff in Sunday's matchup between the Los Angeles Rams and New England Patriots, Trump also fielded some questions about the game and the league, where he indicated he is increasingly popular.

Although Trump praised NFL players for mostly stopping the once-widespread practice of kneeling during the national anthem, he sided with many parents who think the game may not be the best idea for their children.

Asked how he would react if his son Barron wanted to play football, Trump responded: "It's very, it's very tough question. It's a very good question. If he wanted to? Yes. Would I steer him that way? No, I wouldn't. And he actually plays a lot of soccer. He's liking soccer."

He added: "You have to respect our flag and our country. I want that as president and I'd want that as a citizen. And I have a very good relationship. I did them a big favor in negotiating the USMCA, which is basically the replacement to NAFTA, which is one of the worst trade deals ever made.  ... And Roger Goodell, this is a dispute that has gone on for years. Roger Goodell called me and he thanked me."

Trump also touted his ability to secure the passage of a bipartisan, historic criminal justice reform package, saying that should give NFL players protesting police misconduct something to cheer for.

"I'm the one that had passed judicial reform," Trump said. "And if you look at what I did, criminal judicial reform, and what I've done; President Obama tried. They all tried. Everybody wanted to do it. And I got it done and I've been, you know, really --  a lot of people in the NFL have been calling and thanking me for it."