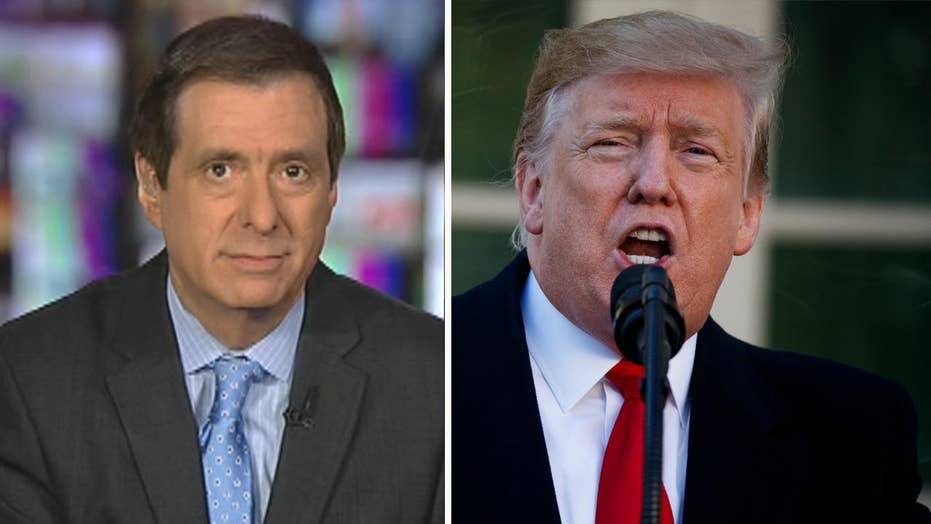 'MediaBuzz' host Howard Kurtz weighs in on the media pouncing on Trump and his intel chiefs contradicting each other.

A dastardly group of dissidents is actively working to undercut President Trump across the foreign policy landscape.

They have fundamentally different views on one major issue after another, and they wield considerable power.

But these aren't shadowy deep-state operatives. They are Trump's own appointees to run national intelligence, the CIA and the FBI.

Yet by testifying on the Hill — and offering their honest assessment — they are now in a war of words with the commander-in-chief. Trump has taken to the Twitter to slam Dan Coats, Gina Haspel and Christopher Wray.

And this high-level sniping is taking place as some Republicans in Congress seem to be more openly challenging the president, at least on foreign policy.

The New York Times framed the conflict yesterday, and much of the media following its lead:

"They think pulling out of Syria and Afghanistan would be a debacle. They think North Korea cannot be trusted. They think the Islamic State is still a threat to America. They think Russia is bad and NATO is good.

"The trouble is their president does not agree."

And here is how he expressed his disagreement:

"The Intelligence people seem to be extremely passive and naive when it comes to the dangers of Iran. They are wrong! They are testing Rockets (last week) and more, and are coming very close to the edge. There [sic] economy is now crashing, which is the only thing holding them back. Be careful of Iran."

IRAN SAYS ITS BALLISTIC MISSILE PROGRAM IS NON-NEGOTIABLE, WILL CONTINUE TO BUILD

The kicker: "Perhaps Intelligence should go back to school!"

Trump simply has a rosier view than those he installed to run these agencies. And the fissures are growing deeper.

On North Korea, for instance, Coats testified that Pyongyang is "unlikely to completely give up its nuclear weapons and production capabilities," which Kim Jong-Un and company consider "critical to the regime's survival."

But Trump says the U.S.-North Korean relationship is the "best it has ever been" and there’s a "decent chance of Denuclearization." That's less enthusiastic than he sounded after his summit meeting with Kim, and the North has not taken any concrete steps with the second summit scheduled for this month.

Of course, the president has tremendous latitude in foreign policy. But his intel people aren't on board, and maybe some of them won't last until the election. After all, Jim Mattis opposed the Syrian pullout and he's gone — with Trump still not having nominated a new defense secretary.

Some Hill Republicans are also standing up to Trump on foreign policy, most notably Mitch McConnell, his closest ally.

The majority leader said in a floor speech that "while it is tempting to retreat to the comfort and security of our shores," there is more to be done, and that "left untended, these conflicts will reverberate in our own cities."

McConnell is also pushing an amendment warning of "the dangers of a precipitous withdrawal" from Syria and Afghanistan. This is one of those congressional declarations that doesn't affect anything, but the symbolism is clear.

There's a reason, in my view, that these mini-rebellions are becoming more public.

The Republicans lost 40 House seats in November. Trump just presided over a 35-day government shutdown and took most of the political blame. Many polls have him in the high 30s, and surveys show that majorities are against the wall and don't think it's worth closing the government over that issue.

In short, Trump may be a less fearsome presence for his own party, at least for now. Many Republican voters may agree with him on ending American involvement in endless wars and on beefing up border security. But some of his own allies are starting to hedge their bets just a bit.