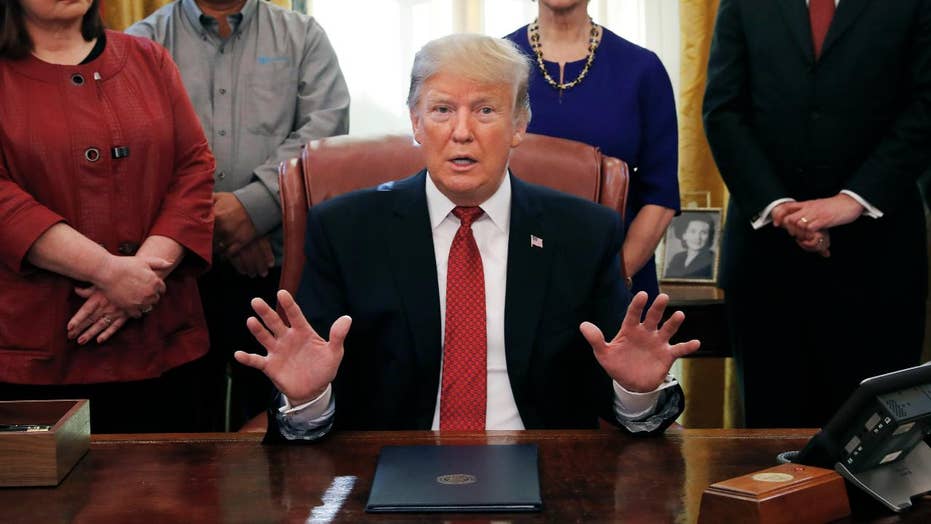 In the second part of a wide-ranging interview that aired on Super Bowl Sunday, President Trump downplayed the numerous charges brought by Special Counsel Robert Mueller – saying many of those charged in the investigation had nothing to do with him – while giving no clear answer to whether he would make the report public.

Reiterating his stance that the Mueller investigation was a “witch hunt,” Trump said that the majority of the people charged so far in the investigation were “bloggers from Moscow” or “people that got caught telling a fib.”

“Of the 34 people, many of them were bloggers from Moscow or they were people that had nothing to do with me, had nothing to do with what they're talking about or there were people that got caught telling a fib or telling a lie,” Trump said in his interview with CBS. “I think it's a terrible thing that's happened to this country because this investigation is a witch hunt.”

When pressed by interviewer Margaret Brennan about the recent charges brought against Trump’s longtime adviser and confidant Roger Stone, the president distanced himself from the eccentric Washington insider and his role in Trump’s 2016 presidential campaign.

There has been widespread talk that Trump would pardon Stone should he be convicted, but the president said in his interview that he has “not thought about it” and Stone “looks like he's defending himself very well” in court.

The indictment does not accuse Stone of coordinating with Russia or with WikiLeaks on the release of hacked Democratic emails. But it does allege that he misled lawmakers about his pursuit of those communications and interest in them. The anti-secrecy WikiLeaks website published emails in the weeks before the 2016 presidential election that the U.S. says were stolen from Democrats by Russian operatives.

The president would not say whether or not he would make the Mueller report public once it was completed, adding that would be determined by the attorney general and that he has “no idea what it’s going to say.”

Acting Attorney General Matthew Whitaker said last week that the Mueller investigation into Russian interference in the 2016 election and any potential ties between the Trump campaign and the Kremlin was “close to being completed.”

Shifting gears to foreign policy and the ongoing crisis in Venezuela, Trump said he has not ruled out a military intervention in Venezuela - a position he has hinted at before - and that he is currently against negotiating with the disputed President Nicolas Maduro.