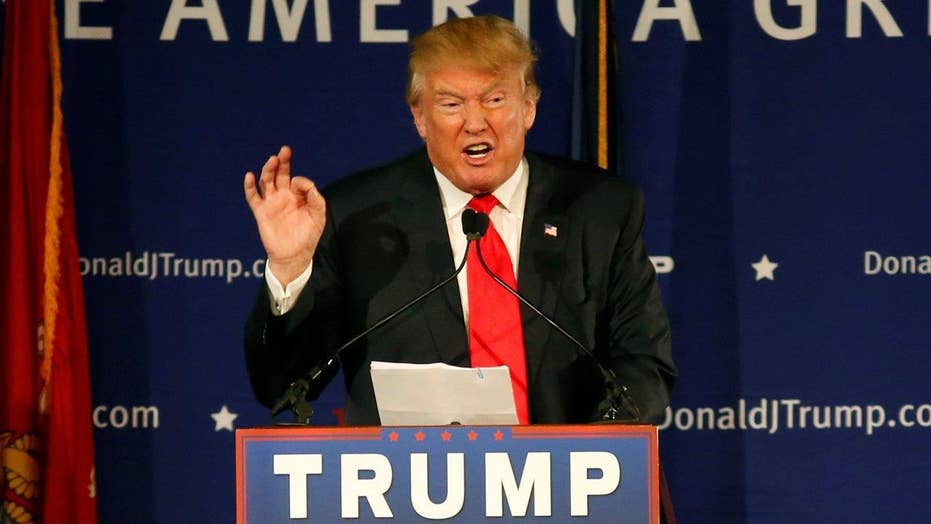 Trump: Block all Muslims from coming to US

Republican presidential candidate Donald Trump doubled down Tuesday on his plan to slam the door on Muslims seeking to enter the U.S., including refugees, tourists and, potentially, even Muslim Americans returning from trips abroad.

“We have no idea who is coming into our country, no idea if they like us or hate us,” Trump told supporters in South Carolina Monday night. “I wrote something today that is very salient…and probably not very politically correct. But I don’t care.”

The sweeping proposal for what Trump called a “total and complete shutdown of Muslims entering the United States,” has drawn condemnation from Muslim groups, civil rights advocates, Democrats and Trump’s rivals for the GOP nomination. But in typical Trump fashion, the tough-talking tycoon is not walking back anything. Appearing on ABC’s “Good Morning America,” Tuesday, Trump invoked former President Franklin D. Roosevelt’s World War II proclamation that German, Italian and Japanese people, including American citizens, were potentially “enemy aliens” who could be detained if in the U.S.

“Look at what FDR did many years ago, and he’s one of the most respected presidents,” Trump said. “We have people in this country that want to blow up our country — you know it and so do I. They’re looking at the jihad. They want a jihad.”

On MSNBC’s Morning Joe, Trump raised the ire of host Joe Scarborough after he repeatedly interrupted co-host Mika Brezezinski while she attempted to ask questions.

“Go to break, go to break,” an exasperated Scarborough said when Trump filibustered the hosts.

“Go to break, then, Joe. Go to break,” Trump taunted before the segment abruptly ended.

Trump’s proposal came five days after a radical Muslim couple killed 14 people and injured 21 at a holiday office party in San Bernardino, Calif., and as President Obama is seeking to resettle thousands of Syrian refugees in the U.S. Critics have questioned whether the refugees can be effectively screened, but none have gone so far as to call for a ban on all Muslims.

“Until we are able to determine and understand this problem and the dangerous threat it poses, our country cannot be the victims of horrendous attacks by people that believe only in Jihad, and have no sense of reason or respect for human life,” Trump said in a statement.

Trump campaign manager Corey Lewandowski told The Associated Press that Trump's proposed ban would apply to "everybody," including Muslims seeking immigration visas as well as tourists seeking to enter the country.

Trump did not respond to questions about whether any ban would also include Muslims who are U.S. citizens and travel outside the country - or how a determination of someone's religion might be made by customs and border officials.

In response to a request for additional detail, Trump said via a campaign spokeswoman: "Because I am so politically correct, I would never be the one to say. You figure it out!"

Meanwhile, his rivals for the Republican nomination wasted no time weighing in, with Jeb Bush tweeting that Trump “is unhinged” and  Carly Fiorina calling the proposal an "overreaction [as] dangerous as President Obama's under-reaction."

"This type of knee jerk, if not demagogic policy stance, is unmitigated surrender to the Islamist global narrative that they, ISIS, and all the Islamist theocrats of the world own what is and is not Islam and faithful Muslim," said Zuhdi Jasser, president of the American Islamic Forum for Democracy.

From the Democratic presidential campaign, Bernie Sanders said "Trump and others want us to hate all Muslims" and Hillary Clinton called the proposal "reprehensible, prejudiced and divisive."

But will it hurt Trump in the campaign? "I have no idea," McCain said. "I thought long ago that things he said would hurt his prospects, and he continues to go up."

FoxNews.com's Christopher Snyder and The Associated Press contributed to this report.