President Trump on Saturday warned that illegal immigrants apprehended in an upcoming roundup by Immigration and Customs Enforcement (ICE) “broke the law” and will be deported -- even as local Democratic politicians are promising to oppose the operation.

“The people that ICE will apprehend have already been ordered to be deported. This means that they have run from the law and run from the courts,” he tweeted. “These are people that are supposed to go back to their home country. They broke the law by coming into the country, & now by staying.”

“When people come into our Country illegally, they will be DEPORTED!” he added.

Outside the White House later on Saturday, he said that "everybody who came into the country illegally will be brought out of the country very legally."

The Washington Post reported that ICE is expected to target 2,000 families in up to 10 cities, including Chicago, New York, Houston and Los Angeles. Trump had announced earlier this week that ICE will “begin the process of removing millions of illegal aliens who have illicitly found their way into the United States.”

ICE said in a statement Friday that “due to law-enforcement sensitivities and the safety and security of U.S. Immigration and Customs Enforcement personnel, the agency will not offer specific details related to enforcement operations.”

However, it said that ICE prioritizes arresting and removing those illegal immigrants “who pose a threat to national security, public safety and border security.”

“In fact, 90 percent of aliens arrested by ICE's Enforcement and Removal Operations component in FY2018 had either a criminal conviction(s), pending criminal charge(s), were an ICE fugitive, or illegally re-entered the country after previously being removed,” the statement said.

The Miami Herald reported that among those first to be targeted will be minors who came into the U.S. without their parents and have since turned 18, people who were ordered removed in absentia and people who missed a court hearing and did not respond to letters mailed to their homes by the Department of Justice. 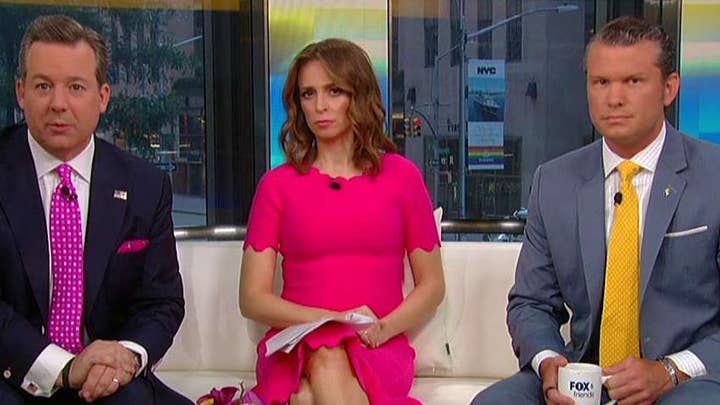 The Post reported that ICE has been preparing agents and equipment for the operation expected to start Sunday and unfold over several days.

But they are likely to face significant opposition from Democratic local officials and politicians, particularly as calls to abolish ICE have taken hold among significant parts of the party.

Chicago Mayor Lori Lightfoot said in a statement that the city has taken steps to support immigrants families, and that ICE agents would get no assistance from the city.

"I reiterated that CPD will not cooperate with or facilitate any ICE enforcement," said the first-term mayor. "I have directed – and Superintendent [Eddie] Johnson has confirmed – that CPD has terminated ICE's access to CPD's databases related to federal immigration enforcement activities."

Meanwhile, Washington, D.C., Mayor Muriel Bowser said her city "remains a proud sanctuary city, and we are committed to protecting the rights of all our immigrant families in the face of these disturbing threats."

Past raids have seen significant opposition from California, and the upcoming roundups are facing similar resistance from the blue state. Gov. Gavin Newsom called the impending removals "cruel.”

"I want Californians to know they have legal rights and protections, regardless of their immigration status," said Newsom. "California is a place of refuge – that includes our schools, our courts and our hospitals and clinics. We hold certain institutions sacred and people should continue to access programs and services they need.”

“Los Angeles will always stand with our immigrant brothers and sisters, and our law enforcement officers will never participate in these actions,” Garcetti said in a statement. “No Angeleno should ever have to fear being snatched from their home or separated from their loved ones — and we are doing everything we can to provide immigrant families with the information and support they need.”

Trump dismissed the opposition on Saturday, saying they were mostly "high crime" cities.