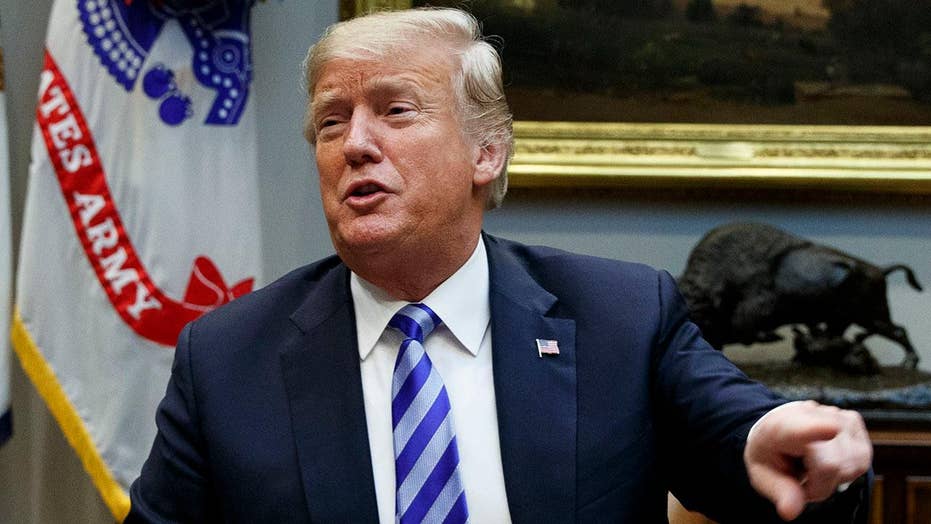 President Trump took to Twitter late Wednesday and vowed to continue "draining the swamp" after The New York Times ran an anonymous op-ed written by a senior White House official who labeled the president "petty and ineffective."

"I'm draining the Swamp, and the Swamp is trying to fight back. Don't worry, we will win!" Trump tweeted.

The New York Times on Wednesday published an explosive opinion piece written that described a "two-track presidency" in which top officials are "working diligently from within to frustrate parts of [President Trump's] agenda and his worst inclinations."

"Does the so-called “Senior Administration Official” really exist, or is it just the Failing New York Times with another phony source? If the GUTLESS anonymous person does indeed exist, the Times must, for National Security purposes, turn him/her over to government at once!" the president tweeted.

The piece titled "I am Part of the Resistance Inside the Trump Administration," said that meetings with the president would "veer off topic and off the rails."

"He engages in repetitive rants, and his impulsiveness results in half-baked, ill-informed and occasionally reckless decisions that have to be walked back," the anonymous author wrote.

The senior White House official wrote that many of the the administration's policies have already made America safer and more prosperous, "but these successes have come despite — not because of — the president’s leadership style, which is impetuous, adversarial, petty and ineffective."

The writer alleged that "there were early whispers within the cabinet of invoking the 25th Amendment" to remove Trump from office because of the president's "instability ... But no one wanted to precipitate a constitutional crisis. "

TRUMP BATTLES BOB WOODWARD BOOK, BUT AGREES ON ONE POINT: 'I'M TOUGH AS HELL ON PEOPLE'

"We are disappointed, but not surprised, that the paper chose to publish this pathetic, reckless, and selfish op-ed. This is a new low for the so-called 'paper of record,' and it should issue an apology," Sander said in a statement.

The op-ed was published one day after The Washington Post published excerpts from a forthcoming book by longtime reporter Bob Woodward in which the Trump administration was depicted as filled with second-guessing staffers and Cabinet members filching papers from the president's desk before he could sign them.