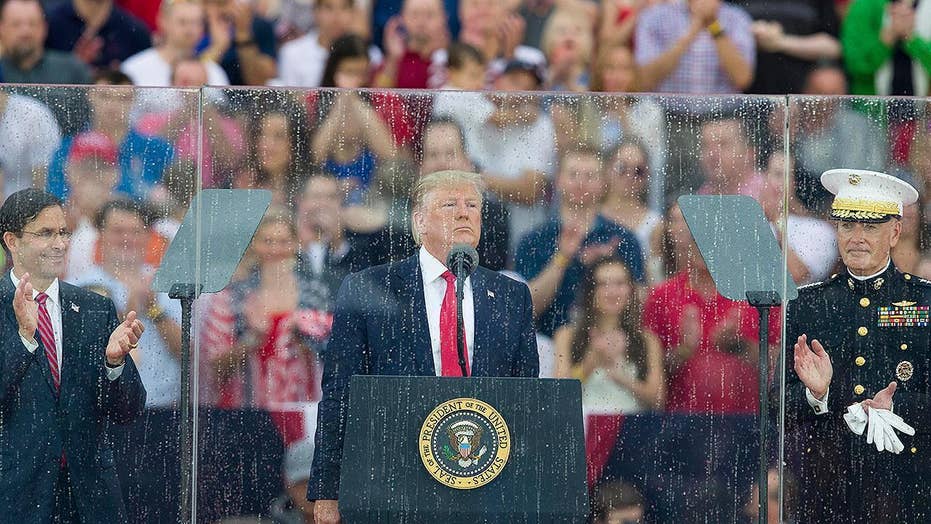 President Trump struck a patriotic, nonpartisan and unifying note during his address at Fourth of July celebrations in Washington, D.C., as the massive crowd of attendees avoided clashes despite provocations from protesters.

The event defied the critics who said the celebration on Thursday would be a partisan political spectacle that would not even attract a significant crowd. CBS, ABC, NBC and MSNBC snubbed the celebration and didn’t air it live, save for their online streaming platforms.

Yet a massive crowd gathered on the Lincoln Memorial despite the rain, with Trump later tweeting an aerial photo showing an audience that filled both sides of the memorial’s Reflecting Pool and stretched to the Washington Monument. 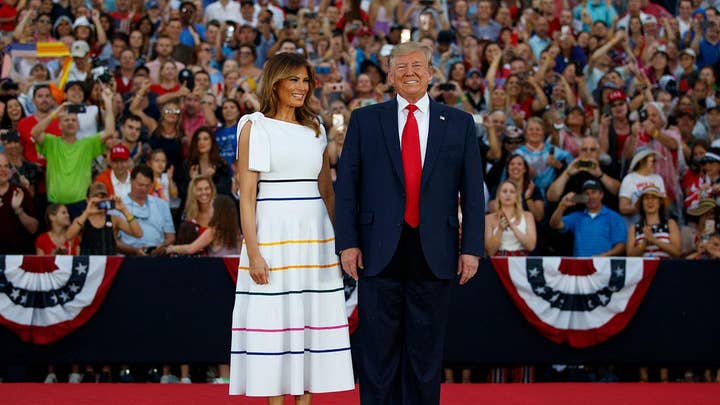 The president used the speech to call on Americans to “stay true to our cause” and praised American heroes including the Armed Forces and civil rights leaders.

“Our nation is stronger today than it ever was before. It is its strongest now,” Trump said. “We celebrate our history, our people, and the heroes who proudly defend our flag: the brave men and women of the United States military.”

“For over 65 years, no enemy Air Force has managed to kill a single American soldier. Because the skies belong to the United States of America,” he added.

He went on to pay tribute to the U.S. Border Patrol and U.S. Immigration and Customs Enforcement (ICE) and hailed Harriet Tubman and Frederick Douglass, African-Americans who campaigned to abolish slavery over 100 years ago, as great Americans.

2020 DEMS TARGET TRUMP, AND THE DNC, AS THEY MARCH IN NH JULY 4 PARADE

The visuals -- flyovers by every branch of the military, a display of tanks and other military hardware, the president rallying Americans before the Lincoln Memorial -- drew complaints from critics that Trump was politicizing the holiday while flexing U.S. military might to an uncomfortable degree. The tenor of the address, however, still marked a contrast with the predictions made by 2020 Democratic presidential candidates who said that Trump would focus on his presidency rather than American ideals. Instead, he strictly stuck to history as he cited numerous tales of valor to weave a story of the American spirit.

“I wonder what Donald Trump will say this evening, when he speaks to the nation at an event designed more to stroke his ego than celebrate American ideals,” former Vice President Joe Biden, the 2020 Democratic primary front-runner, said during an event in Iowa.

Sen. Kirsten Gillibrand of New York also fired away at Trump, telling reporters  that the event was “a waste of money, you know he’s having a parade for himself, putting tanks out there for himself, and if he really cares about the men and women of our nation he would be investing in higher pay, better housing, better health care.”

She added: “Because it’s really all about Trump. It’s not about our service members, it’s not about their sacrifices it’s not about my brothers and sisters who lost their lives in service to this country and that’s the most unfortunate thing.”

Before the event and around the nation’s capital, rowdy agitators linked to the Revolutionary Communist Party and other groups gathered to protest the event, chanting “America was never great.”

But the streets of Washington remained generally peaceful, with only some minimal clashes between the fringes of the far-left and far-right.

The agitators burned at least two American flags in front of the White House, prompting the Secret Service to intervene to put out the fire.

Neither individual was identified. One of the individuals arrested and two Secret Service officers were being treated for minor injuries.

Still, this was a far cry from the fears that the day could resemble Trump’s inauguration ceremony in 2017, when black-clad activists created havoc and the city saw violent clashes between them and die-hard supporters of the president, or the deadly Charlottesville rally that attracted neo-Nazis and white supremacists.

Instead, ordinary Americans came to watch the event that Trump called “one of the biggest celebrations in the history of our Country.”

President Donald Trump, first lady Melania Trump, Vice President Mike Pence and Karen Pence and others stand as the US Army Band performs and the US Navy Blue Angels flyover at the end of an Independence Day celebration in front of the Lincoln Memorial, Thursday, July 4, 2019, in Washington. (AP Photo/Alex Brandon)

“Even though everybody has different opinions, everybody’s getting along,” Kevin Malton, a Trump supporter from Kentucky, told the Associated Press.

Trump’s fervent critics, meanwhile, resorted to erecting a “Trump baby” balloon to protest what activists saw as his intrusion in Independence Day and a focus on military might that they associate with martial regimes.

“We think that he is making this about himself and it’s really a campaign rally,” said Medea Benjamin, Code Pink’s co-director. “We think that he’s a big baby. ... He’s erratic, he’s prone to tantrums, he doesn’t understand the consequences of his actions. And so this is a great symbol of how we feel about our president.”