President Trump on Thursday doubled down on his push for a citizenship question on the 2020 census, promising that his administration is "working very hard" on the controversial issue -- as reports say he is mulling using an executive order to get the question on the census.

“So important for our Country that the very simple and basic ‘Are you a Citizen of the United States?’ question be allowed to be asked in the 2020 Census,” he tweeted.

He added that the Commerce and Justice Departments are “working very hard on this, even on the 4th of July!”

Earlier this week, Commerce Secretary Wilbur Ross announced that his department was going ahead with the printing of the census without the citizenship question, apparently indicating that the administration had dropped the controversial issue. That decision came after a Supreme Court ruling last week that blocked the citizenship question for the time being until more reasoning from the administration was provided.

“The Census Bureau has started the process of printing the decennial questionnaires without the question,” Ross said in a statement. “My focus and that of the bureau and the entire department is to conduct a complete and accurate census.”

The Commerce Department had claimed that the question would help the administration enforce the Voting Rights Act. Opponents of the question fear that by asking people about their citizenship status, immigrants may not want to respond and be counted in the census. This would result in official population numbers that are lower than they truly are, which in turn could yield less federal funding and fewer congressional seats in districts with high immigrant populations. Those districts tend to favor Democrats.

Ross’ announcement appeared to mark a significant climbdown for the administration. But Trump on Wednesday said that reports that Commerce had dropped the “quest” to put the question on the census were “fake!”

“We are absolutely moving forward, as we must, because of the importance of the answer to this question,” he tweeted.

Later Wednesday, a high-ranking Justice Department lawyer told a federal judge that the administration had not abandoned efforts to put the question on the census, saying that there may yet be a “legally available path” open to the administration. 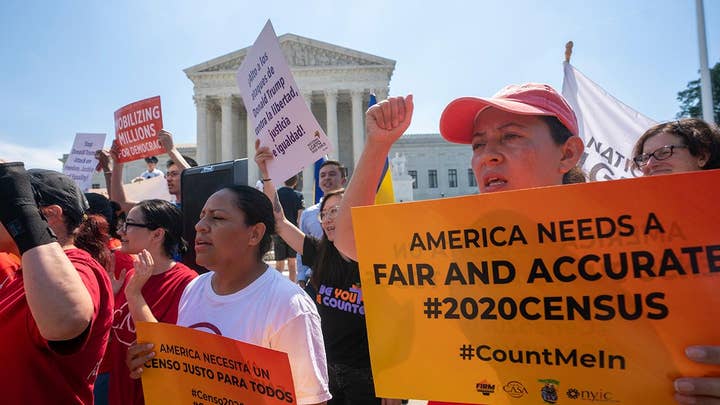 "The administration is considering the appropriateness of an executive order that would address the constitutional need for the citizenship question to be included in the 2020 census," a source told Axios.

Such a move would likely face significant legal pushback, and could also fail in the Supreme Court. But one official told Axios that it may allow the administration to shift the blame for the ultimate failure of the push on Supreme Court Justice John Roberts.

"I think that there’s a good argument to be made that even though the president may lose in litigation at the end of the day, going through that process ultimately makes it clear that it’s the chief justice, and not the Executive Branch, that bears responsibility for that unfortunate outcome," the source with knowledge of discussions told the outlet.

Fox News’ Ronn Blitzer and Gregg Re contributed to this report.