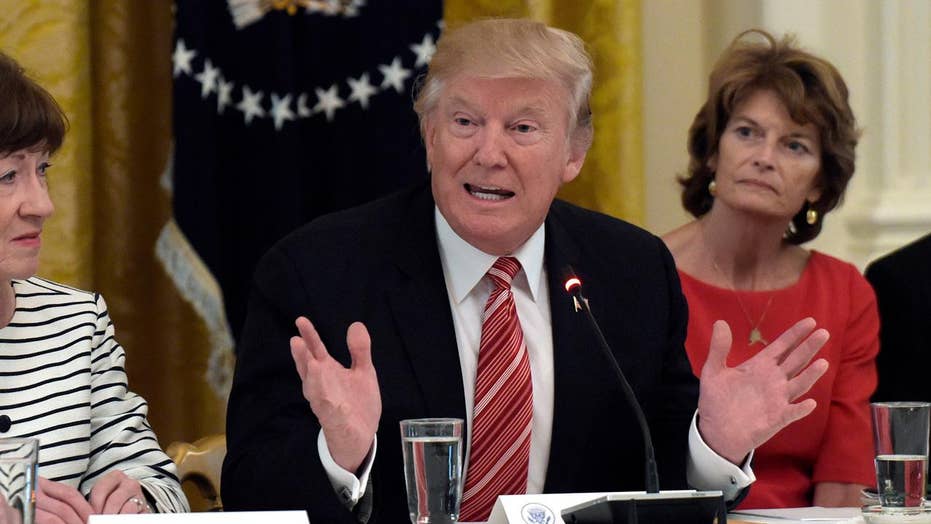 Trump: ObamaCare is melting down, we're trying to solve it

President Trump issued a blunt challenge to Republican senators on Friday to repeal ObamaCare now and replace it “at a later date” if they are unable to strike a deal on more comprehensive legislation – as rank-and-file lawmakers also voiced concern that time is running out to strike a deal.

“If Republican Senators are unable to pass what they are working on now, they should immediately REPEAL, and then REPLACE at a later date!” Trump tweeted.

The challenge came as Senate Majority Leader Mitch McConnell, R-Ky., was working behind the scenes to hammer out a new health care bill draft after scrapping a previous version in the face of flagging GOP support.

McConnell initially had wanted to have some semblance of a deal by Friday so it could be evaluated by budget scorekeepers and ready for a vote when lawmakers return from July 4th recess. But with no ‘deal’ in hand as of late Friday, talks are expected to drag on.

Asked Friday afternoon about the president’s challenge, White House Deputy Press Secretary Sarah Sanders said Trump hasn’t changed his thinking and is still committed to working with the Senate on legislation – while exploring all options.

Republican senators are doing the same.

Nebraska GOP Sen. Ben Sasse floated a ‘plan B,’ saying if McConnell cannot reach a deal by July 10, the Senate should consider repealing the “maximum amount of ObamaCare” now – while adding a one-year delay before it takes effect, giving senators time to work out the details of a replacement plan.

With Congress out until July 10, calendar pressure is building.

Ten Republican senators have signed a letter calling on McConnell to cancel the August recess if significant progress hasn’t been made on fixing health care, funding the government, dealing with the debt ceiling and improving the tax code.

"Our current Senate calendar shows only 33 potential working days remaining before the end of the fiscal year. This does not appear to give us enough time to adequately address the issues that demand immediate attention,” they wrote.

Despite Trump’s tweet, repealing ObamaCare without a plan to replace it may be unlikely, considering the confusion it could cause in the insurance marketplace and for consumers.

But crafting a new Senate bill has proved challenging. Sources confirmed to Fox News that McConnell and Ohio Sen. Rob Portman got into a heated argument earlier this week over Medicaid. McConnell pushed for trying to slow the growth of Medicaid spending, while Portman expressed concerns about this, accusing leadership of overreaching on the bill. Portman would normally be an ally, and tensions with him could portend problems for winning over several other members thought to be on the fence or resistant to the current direction.

Leadership aides lately had downplayed the significance of the supposed Friday deadline for a deal. Talks are ongoing, and aides say they still are seeking a compromise that can garner 50 votes – the minimum needed to get some version of health care legislation passed, with Vice President Pence playing the role of tie-breaker.

Amid rising premiums and diminishing insurer options in many markets, Health and Human Services Secretary Tom Price on Friday stressed the importance of crafting a new plan.

“The status quo is unacceptable,” he told “Fox & Friends.”

Senate GOP sources said there is agreement between the White House and Senate lawmakers to add at least $45 billion to address the opioid problem, which could help win over wavering senators.

Senate Democratic Leader Chuck Schumer, meanwhile, essentially has called for Republicans to start over and work with his party on a new bipartisan bill. In a statement, Schumer cited an updated estimate regarding the coverage impact of the now-scrapped bill in declaring, “The Senate version of Trumpcare is even worse than we thought.”

“Rather than pushing a partisan bill that cuts taxes for the rich and slashes Medicaid, Senate Republicans should start over on health care and work with Democrats on a bipartisan plan to improve our health care system,” he said.