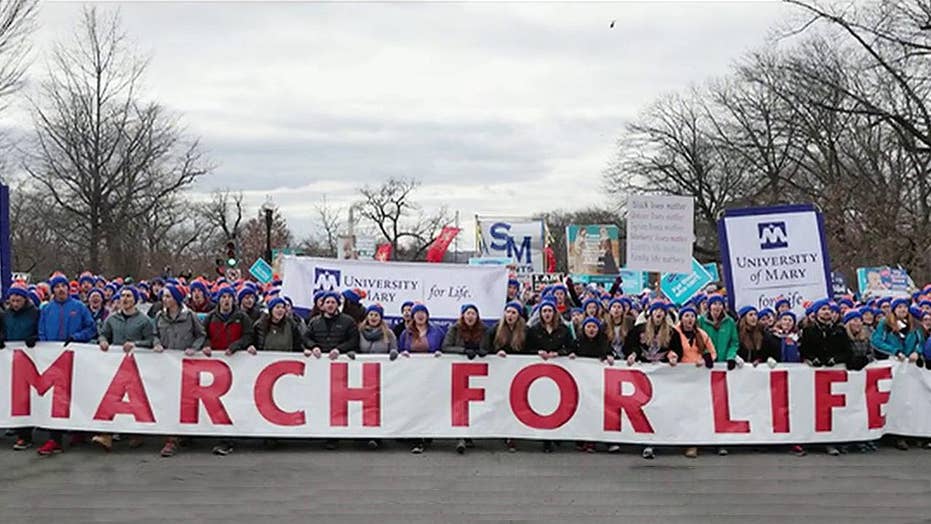 President Trump will become the first president to attend and speak at March for Life, the largest annual gathering of pro-life activists; Kristin Fisher reports from Washington with reaction.

President Trump announced Wednesday that he plans to attend the March for Life this week, which would make him the first president in history to speak at the largest annual gathering of pro-life activists.

The event is scheduled for Friday in Washington. Organizers confirmed the president's attendance.

“We are deeply honored to welcome President Trump to the 47th annual March for Life," March for Life president Jeanne Mancini said in a statement provided to Fox News. "He will be the first president in history to attend and we are so excited for him to experience in person how passionate our marchers are about life and protecting the unborn."

The march is expected to draw 100,000 activists to the nation's capital as Republicans like Trump pursue an ambitious pro-life agenda. While pro-life activists have heaped praise on the president for his pro-life policies, his actions have sparked lawsuits and condemnation from groups like Planned Parenthood.

"From the appointment of pro-life judges and federal workers, to cutting taxpayer funding for abortions here and abroad, to calling for an end to late-term abortions, President Trump and his Administration have been consistent champions for life and their support for the March for Life has been unwavering. We are grateful for all these pro-life accomplishments and look forward to gaining more victories for life in the future," Mancini wrote.

Trump's announcement came after another unprecedented move. During a video message in 2018, Trump became the first sitting American president to address the March for Life.

On the actual anniversary of the decision, President Trump appeared to flout that legacy by declaring it the National Sanctity of Human Life Day.

"Today, I call on the Congress to join me in protecting and defending the dignity of every human life, including those not yet born," Trump said in a proclamation Wednesday. "I call on the American people to continue to care for women in unexpected pregnancies and to support adoption and foster care in a more meaningful way, so every child can have a loving home."

His speech will take place as both sides of the abortion debate prepared to pour vast sums of money and resources into the 2020 elections.

Last week, Planned Parenthood rolled out its most expensive electoral effort to date, warning about an unprecedented attack from Republicans. The operation will include everything from grassroots organizing and building its volunteer base to polling and paid advertisements. Several pro-life organizations will be spending millions of dollars -- $52 million from Susan B. Anthony List -- on the election as well.

The unprecedented spending likely came in response to a wave of state-level laws restricting abortion in addition to what pro-choice advocates say is a serious, federal assault on the organization. Pro-life activists have claimed they are literally trying to save lives by imposing restrictions like the heartbeat bill, which would prohibit abortions after a doctor can detect a heartbeat.

Planned Parenthood responded to pro-life measures with a long list of legal challenges -- approximately 40 open cases, according to its most recent annual report -- and was able to salvage Missouri's last abortion clinic amid restrictive legislation.

It's also challenged the president on his so-called "gag rule," which effectively severed a funding source that's provided the organization around $60 million in the past.

According to its annual report, it performed a record number of abortions and received a record amount of taxpayer funding. Released at the beginning of January, the annual report shows the group received $617 million in taxpayer funds for the fiscal year ending in June. That number represented roughly 37 percent of its overall funding and about a 9 percent increase from the previous year.