'MediaBuzz' host Howard Kurtz weighs in on President Trump calling a New York Times story on the Mexican tariff deal a fraud and his ramping up of attacks against the media.

When President Trump has a setback, he usually winds up ripping the way the media are covering it.

When the president has a success, he also winds up ripping the way the media are covering it.

That is what’s unfolding now in the wake of the Mexican tariff deal, part of a wave of anti-press postings that are unusually intense, even by Trumpian standards.

GUTFELD ON TRUMP'S TARIFFS AND THE DEMOCRATIC RESPONSE

In fact, Trump gave a rare nod to the criticism that it’s unseemly for him to be personally slamming journalists and their outlets—this after denigrating “Little Donny Deutsch,” the MSNBC commentator, as a “disaster” who is not really a former friend but supposedly begged to be on “The Apprentice.”

“I know it is not at all ‘Presidential’ to hit back at the Corrupt Media, or people who work for the Corrupt Media, when they make false statements about me or the Trump Administration,” he tweeted. “Problem is, if you don’t hit back, people believe the Fake News is true. So we’ll hit back!”

And he is, several times a day.

The president was already upset with tepid coverage that credited him for the deal but questioned whether the Mexicans would be able to carry out their promises to stem the tide of Central American migrants seeking U.S. asylum. Now he’s continuing his assault on his least favorite newspaper for its coverage of the last-minute deal with Mexico.

Having previously called a Times story “shockingly false and untrue,” Trump now says the paper should admit it’s “a FRAUD and nothing more than a badly reported ‘hit job’ on me, something that has been going on since the first day I announced for the presidency! Sick Journalism.”

The paper stands by its reporting and says that like previous stories denied by Trump, it will eventually be shown to be accurate.

Here is the piece that set him off:

“The deal to avert tariffs that President Trump announced with great fanfare on Friday night consists largely of actions that Mexico had already promised to take in prior discussions with the United States over the past several months, according to officials from both countries who are familiar with the negotiations.”

The Times has significant details, such as that an agreement to allow asylum seekers to remain in Mexico “was reached in December in a pair of painstakingly negotiated diplomatic notes that the two countries exchanged” when Kirstjen Nielsen ran Homeland Security.

Now it’s true that no deal is a deal until it’s signed. It’s equally true that much of the media don’t give Trump credit for a confrontational negotiating style in which he often throws talks into chaos before eking out last-minute concessions. There was substantial Republican and business opposition to Trump’s threatened 5 percent tariff on Mexican goods. 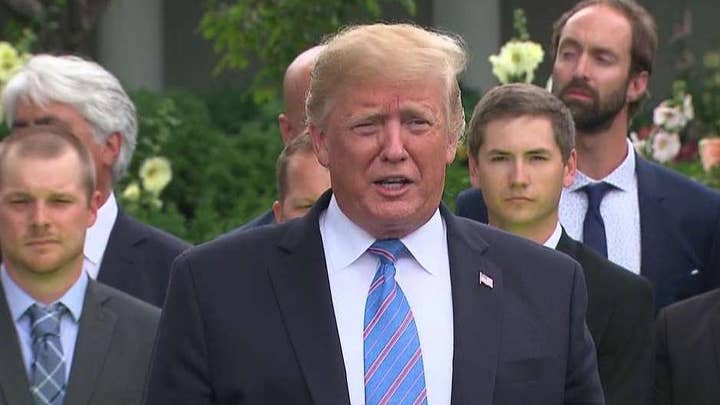 Instead, the media narrative is that Trump creates crises and then plays the hero in resolving them. Whether that’s fair or not, it doesn’t make the Times story “shockingly false.”

Trump, who called in to CNBC’s “Squawk Box” yesterday to defend the deal, said “if we didn’t have tariffs we wouldn’t have made a deal with Mexico.”

The president has also been firing his ammunition at the corporate parents of media outlets—a tactic he’s used against the “Amazon” Washington Post.

Having watched MSNBC over the weekend to see what “the opposition” was saying, Trump declared the product to be “such lies…Fake News! No wonder their ratings, along with CNN, are WAY DOWN. The hatred Comcast has is amazing!”

And there was this when he unloaded on CNN while having to watch it in Europe: “Why doesn’t owner @ATT do something?...I believe that if people stopped using or subscribing to @ATT, they would be forced to make big changes at @CNN, which is dying in the ratings anyway.”

The spectacle of the president of the United States suggesting a consumer boycott of an American company because he doesn’t like the coverage of its subsidiary would be rather shocking if people took it more seriously. The stock market shrugged it off and AT&T’s share price rose.

For Trump supporters who are untroubled by this, imagine how you’d have felt if Barack Obama had floated a boycott of, say, 20th Century Fox movies because he didn’t like the way Fox News covered him.

Look, the media’s tone toward this president is overwhelmingly negative. If he gives a good D-Day speech, they focus on his attack on Nancy Pelosi. That’s just the way it is, and he’s entitled to punch back.

But when Trump indiscriminately blasts parent companies, or claims a story is fraudulent without explaining the errors, that rhetoric tends to become background noise.