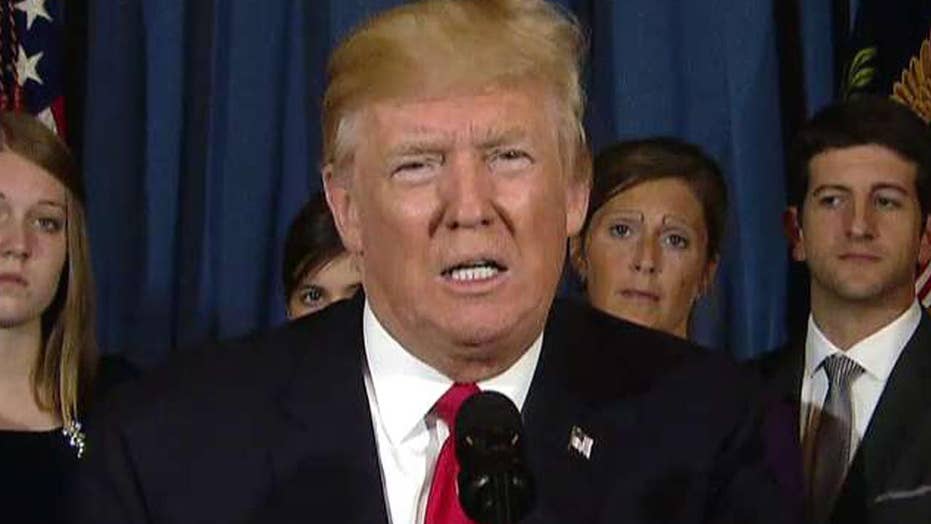 Trump: We must repeal and replace ObamaCare now

President Trump, ahead of a key Senate vote, urged waffling Republican lawmakers to follow through on vows to repeal ObamaCare -- warning inaction is “not an option” and describing the 2010 health law as a “big, fat, ugly lie.”

Speaking from the Blue Room in the White House, Trump hurled multiple insults at the health care law of the land. He said the first rule of medicine is to do no harm but that the Affordable Care Act has caused “nothing but pain.”

"The American people have waited long enough," he said. "Now is the time for action."

While slamming Democrats, Trump also called out Senate Republicans in his seven-minute speech and said they "have not done their job."

Earlier in the day, Trump tweeted, "Republicans have a last chance to do the right thing on Repeal & Replace after years of talking & campaigning on it."

And on Sunday, Trump said if Republicans fail to pass legislation to roll back his predecessor’s health care law, “the repercussions will be far greater than any of them understand!”

To be sure, Trump has had an uneven approach to health care -- at times saying it should implode while reversing course last week and telling Republican lawmakers to skip their August recess to work on the legislation.

Then, he seemed to politically threaten at least one holdout by suggesting inaction might put his Senate seat on the line. During a meeting with GOP senators last week, Trump threw a verbal jab at Nevada Sen. Deal Heller, who was sitting to his right.

“Look, he wants to remain a senator, doesn’t he? And I think the people of your state, which I know very well, I think they’re gonna appreciate what you hopefully will do,” Trump said. “Any senator who votes against starting debate is really telling America that you’re fine with ObamaCare."

Heller said in June he would oppose the first version of the Senate’s health care bill.

Senate Republicans are expected to hold another vote on health care this week but there’s some confusion as to what legislation they would be voting on or how it would affect millions of Americans whose access to health care has been in limbo for months.

Senate leaders are expected to hold a procedural vote Tuesday -- on something. The White House and Republican leaders have been vague on whether the legislation will seek to replace former President Barack Obama’s health care law or simply repeal it.

Vice President Pence said Monday that “help is on the way” and told Americans “President Trump hears you and is fighting for you.”

Senate Republicans are considering legislation that would repeal and replace Obama's law, and a separate bill that would simply repeal "Obamacare" with a two-year delay for implementation to give Congress more time to agree on a replacement.

Both versions encountered opposition from enough GOP senators to doom the effort, but McConnell is making a last-gasp attempt after Trump insisted that senators not leave town for the August recess without sending him some kind of health overhaul bill to sign.

In the Senate, Republicans hold a 52-48 seat majority. They can only afford to have one of their senators defect and still prevail on a health bill, assuming that Republican Sen. John McCain remains in Arizona, where he's being treated for brain cancer. Democrats are standing united in opposition.

Thune said no matter the outcome of the upcoming vote, senators would continue working to pass health legislation no matter how long it took.

At least two Republican senators Sunday appeared to reaffirm their intention to vote against the procedural motion if it involved the latest version of the GOP's repeal-and-replace bill.

Moderate Sen. Susan Collins of Maine said she continued to have concerns about reductions to Medicaid and criticized the Republican process, saying lawmakers were being unfairly kept in the dark. Under McConnell's plan, 22 million more people would become uninsured by 2026, many of them Medicaid recipients. She wants to hold public hearings and work with Democrats.

Conservative Sen. Rand Paul of Kentucky said he would only support a repeal-only bill. That version would reduce government costs but lead to 32 million additional uninsured people over a decade. At least three senators including Collins have previously expressed opposition to that plan.

"What are we opening debate to? Last week, Senate leadership said it would be a clean repeal ... and I think that's a good idea," Paul said. "The other alternative is the Senate leadership bill that doesn't repeal ObamaCare, is ObamaCare light and is loaded with pork. ... I'm not for that."