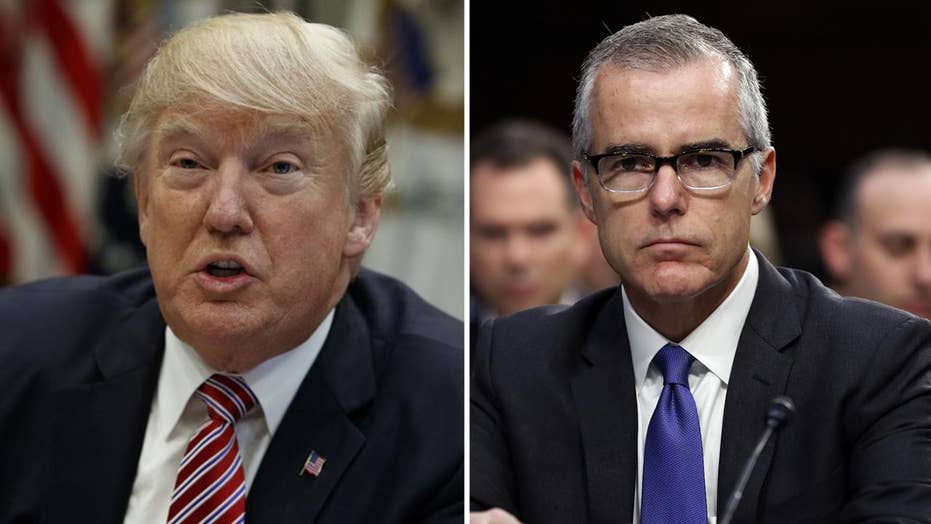 Is Trump in the clear, but McCabe in trouble?

President Trump on Thursday blasted former FBI Deputy Director Andrew McCabe as a “disgrace” to the FBI and to the country while criticizing his handling of the bureau’s investigation into Hillary Clinton’s private email server and his work on the “Russia Hoax.”

The president’s comments came after CBS News aired excerpts of an upcoming “60 Minutes” interview with McCabe, who is promoting a new book that will be published next week.

“Disgraced FBI Acting Director Andrew McCabe pretends to be a ‘poor little Angel’ when in fact he was a big part of the Crooked Hillary Scandal & the Russia Hoax –a puppet for Leakin’ James Comey. I.G. report on McCabe was devastating,” Trump said, referring to the Justice Department’s inspector general report which revealed McCabe “lacked candor” when federal investigators asked about his communications with the media.

“Part of the ‘insurance policy’ in case I won…Many of the top FBI were fired, forced to leave, or left,” Trump continued. “McCabe’s wife received BIG DOLLARS from Clinton people for her campaign – he gave Hillary a pass. McCabe is a disgrace to the FBI and a disgrace to our Country. MAKE AMERICA GREAT AGAIN!”

The president was referring to a text message between former FBI officials Peter Strzok and Lisa Page, where the two discussed an “insurance policy” should he become president.

“I want to believe the path you threw out for consideration in Andy’s office -that there’s no way he gets elected – but I’m afraid we can’t take that risk,” Strzok texted Page on Aug. 15, 2016. “It’s like an insurance policy in the unlikely event you die before 40.”

The text was uncovered as part of Justice Department Inspector General Michael Horowitz’s review, among hundreds of other messages exchanged between the two.

Trump, though, has repeatedly blasted McCabe’s wife, Jill, who ran for Virginia State Senate in 2015, over donations to her campaign. The political action committee for then-Virginia Gov. Terry McAullife, a Democrat and Clinton ally, donated $467,000 to her campaign. McCabe was an associate deputy director at the FBI at the time.

Trump has cited the donations from a Clinton ally as evidence that McCabe did not lead an impartial probe into the former secretary of state’s handling of classified information on her private email server. The inspector general, though, found that there was “no evidence” connecting political views with “specific investigative decisions” in that case.

Trump’s Thursday tweets came directly in response to McCabe’s sit-down interview with CBS News’ Scott Pelley, which is slated to air Sunday night on “60 Minutes.” An excerpt of the interview was aired on “CBS This Morning” on Thursday.

McCabe, who also details that phone call in his book, took the call from the president while members of the bureau’s Russia team were in the room. The call, according to an excerpt from McCabe’s book published in The Atlantic Thursday, largely focused on Trump allegedly celebrating the firing of Comey saying he was getting positive feedback for the decision.

Pelley went on to ask, “how long was it after that that you decided to start the obstruction of justice and counterintelligence investigations involving the president?”

“I think the next day, I met with the team investigating the Russia cases,” McCabe confirmed. “And I asked the team to go back and conduct an assessment to determine where are we with these efforts and what steps do we need to take going forward.”

He added: “I was very concerned that I was able to put the Russia case on absolutely solid ground in an indelible fashion that were I removed quickly and reassigned or fired and the case could not be closed or vanish in the night without a trace. I wanted to make sure that our case was on solid ground. And if somebody came in behind me and closed it and tried to walk away from it, they would not be able to do that without creating a record of why they’d made that decision.”

In the excerpts of his book, McCabe also detailed his role urging Deputy Attorney General Rod Rosenstein to appoint a special counsel.

On Thursday, Pelley detailed other portions of his sit-down with McCabe on CBS' "This Morning.” Pelley said McCabe described meetings at the Justice Department after Comey's firing to discuss “whether the vice president and a majority of the Cabinet could be brought together to remove the president under the 25th Amendment.”

In September, Fox News reported details about a meeting on May 16, 2017 at Justice Department headquarters, where the same topic was discussed. Sources told Fox News that McCabe, former FBI counsel Lisa Page, and Rosenstein, who was tasked with oversight of the Russia investigation after Sessions’ recusal, were in the room.

Rosenstein reportedly told McCabe that he might be able to persuade Sessions and then-Homeland Security Secretary and now-former chief of staff John Kelly to begin proceedings to invoke the 25th Amendment, which allows removing the president from office if he/she has an impairment that prevents fulfilling presidential duties.

Rosenstein adamantly denied the claims at the time.

In reaction to the interview, a Justice Department spokesperson told Fox News that Rosenstein "again rejects Mr. McCabe's recitation of events as inaccurate and factually incorrect."

McCabe was fired from the bureau in March 2018 by former Attorney General Jeff Sessions after an inspector general report revealed that he "lacked candor" when discussing his communications with members of the media when asked by federal investigators.

"“Andrew McCabe was fired in total disgrace from the FBI because he lied to investigators on multiple occasions, including under oath. His selfish and destructive agenda drove him to open a completely baseless investigation into the President," White House Press Secretary Sarah Sanders said in a statement to Fox News Thursday. "His actions were so shameful that he was referred to federal prosecutors. Andrew McCabe has no credibility and is an embarrassment to the men and women of the FBI and our great country.”