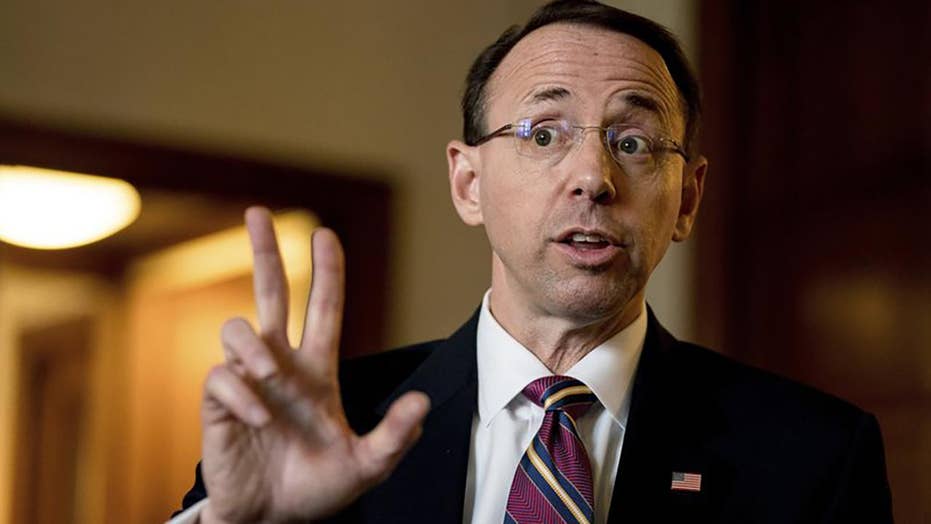 Chief intelligence correspondent Catherine Herridge looks at what's next for the official overseeing the Russia investigation.

Two senior FBI officials told the bureau’s top lawyer they believed Deputy Attorney General Rod Rosenstein was “serious” when he discussed secretly recording President Trump and invoking the 25th Amendment to remove him from office last year, according to sources close to a congressional investigation – an account that conflicts with claims from Rosenstein and others that the comments either were inaccurately reported or made in jest.

Baker, whose testimony was described as deliberate and sober, added he had not done a legal analysis and was unsure whether it was “unethical or illegal,” the source added.

The testimony would appear at odds with other accounts of those explosive discussions.

The New York Times first reported the details of the alleged discussions between Rosenstein and senior FBI officials in May 2017, one day before Rosenstein appointed Special Counsel Robert Mueller to oversee the Russia investigation. After the allegations surfaced, Fox News reported on Sept. 22, based on a source who was in the meeting, that Rosenstein's "wire" comments were viewed as "sarcastic." Rosenstein also released a statement saying, "I never pursued or authorized recording the President and any suggestion that I have ever advocated for the removal of the President is absolutely false."

The report triggered new tensions between the White House and DOJ, where Rosenstein oversees the Mueller-led probe. Amid speculation that the deputy attorney general might be fired or quit, a meeting between Trump and Rosenstein was pushed off repeatedly -- until Monday, when the two met for 45 minutes aboard Air Force One, en route to a police conference in Florida. Trump said the conversation was "great," and he has no plans to fire Rosenstein.

Fox News has learned that the meeting in question included Rosenstein, McCabe and Page, among others, and took place at the Justice Department.

Asked about Baker’s account, a DOJ spokesperson said the department stood by its previous statements.

A spokesperson for McCabe declined to comment. McCabe’s memos documenting the Rosenstein meeting were turned over to Mueller. The House Judiciary Committee issued a subpoena for the records, but they were not provided by last Thursday’s deadline. A lawyer for Lisa Page did not respond.

As the former FBI general counsel, Baker was a senior figure with a pivotal position who had the ear of the FBI director.

Baker also is at the heart of surveillance abuse accusations, many from congressional Republicans. His deposition lays the groundwork for a planned closed-door House GOP interview with Rosenstein later this week.

Baker, formerly the FBI's top lawyer, helped secure the Foreign Intelligence Surveillance Act (FISA) warrant on former Trump campaign adviser Carter Page, as well as three subsequent renewals. Prior to the deposition, Republican investigators said they believed Baker could explain why information about the British ex-spy behind a salacious Trump-related dossier, Christopher Steele, and Steele’s apparent bias against then-candidate Trump, were withheld from the FISA court, and whether other exculpatory information was known to Rosenstein when he signed the final FISA renewal for Page in June 2017.

Fox News asked Baker after last week’s deposition about the handling of the Trump dossier, what he told Rosenstein about exculpatory evidence and whether he was the subject of an FBI leak investigation. Baker told Fox News he could not answer such questions.