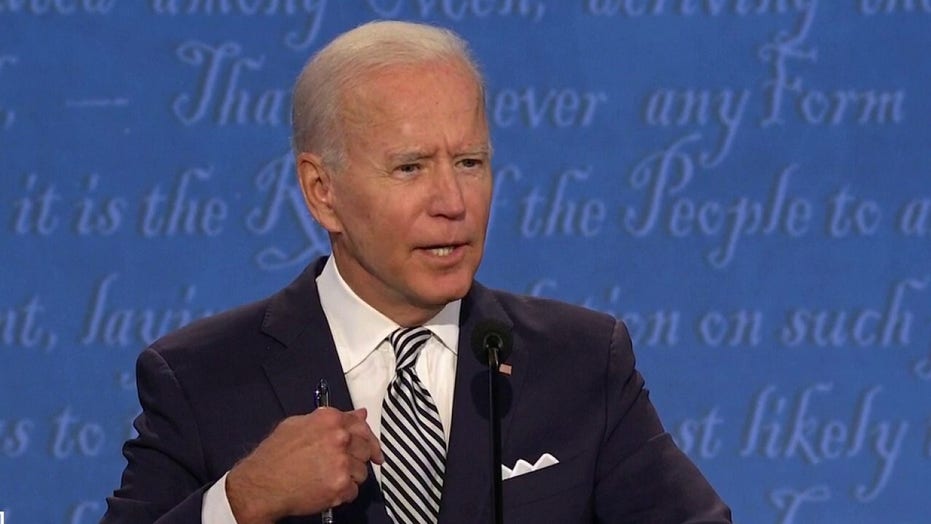 "Nobody wants Sleepy Joe as a leader, including the Radical Left (which he lost last night!). He disrespected Bernie, effectively calling him a loser!" the president tweeted.

The former vice president said during Tuesday's debate that he does not support the progressive Green New Deal.

The answer appeared to contradict Biden's $1.7 trillion, 10-year plan on his 2020 campaign website, however, which states that the Democratic nominee "believes the Green New Deal is a crucial framework for meeting the climate challenges we face."

Ocasio-Cortez responded to surprise over Biden's comment in a Tuesday tweet, saying, "Our differences are exactly why I joined Biden’s Climate Unity Task Force — so we could set aside our differences [and] figure out an aggressive climate plan to address the planetary crisis at our feet. Trump doesn’t even believe climate change is real."

Trump during the debate said he agrees "to an extent" that humans are responsible for climate change.

Former 2020 Democratic presidential candidate Sen. Bernie Sanders campaigned on a plan to launch the Green New Deal over 10 years. Biden brought up during the debate that he beat Sanders in the primary to become the Democratic nominee.

"The matter of the fact is that I beat Bernie Sanders," Biden said. "By a whole hell of a lot."

Biden also challenged the radical left when he said he is "for law and order, but also for justice." Progressives have challenged the term "law and order" as a message that promotes the repression of Black communities dating back to the 1960s and continuing on into the Regan and Clinton administrations.

The former vice president previously dismissed the president's claims that he is a "Trojan horse for socialism" during an Aug. 31 rally at Carnegie Mellon University in Pittsburgh.

"I want a safe America. Safe from COVID. Safe from crime and looting, safe from racially motivated violence, safe from bad cops. Let me be crystal clear. Safe from four more years of Donald Trump," he said.