Three years later, amid a series of legal and political setbacks that have raised questions about the project's future, the Trump administration is making a renewed effort to show voters the U.S.-Mexico border wall remains a top priority — touting recent construction and vowing to pick up the pace going into 2020.

The purchase of critical strips of private land has cleared the way, they argue, for a new phase. The plan, officials told reporters at a briefing this week, is to construct upwards of 450-500 miles by the end of next year — a massive undertaking representing nearly eight times what construction teams have erected to date.

"It's going up fast and we're putting it where the Border Patrol most wants it," Trump said in a video message Sunday. "We're taking money from all over because, as you know, the Democrats don't want us to build the wall — they're fighting us at every step."

The president has made recent gains in his immigration agenda. The administration announced new stats on Monday showing the number of border apprehensions in August was 64,006 — a plunge of 56 percent since May. While still historically high, administration officials said it shows diplomacy efforts with countries like Mexico is paying dividends.

Meanwhile, the administration has announced a formal “public charge” rule cracking down on immigrants who claim welfare, an overhaul to the Flores settlement that limits how long children and families can be kept in custody, and a rule that stops asylum seekers who have passed through other countries from claiming asylum in the U.S.

While many of the government efforts are facing major court challenges and decried by critics as an overreach, they mark an aggressive push to crack down on illegal immigration and overhaul the legal immigration system.

The wall has faced its own set of challenges. Trump struggled to get funding from Congress and faced hurdles like the challenge of securing private land needed for new wall construction. Democrats are almost entirely opposed to a wall, saying it is a waste of money and against American values.

But in July, the court sided with the administration in lifting a freeze that halted plans to use Pentagon money for wall construction. Last week, the Pentagon announced it intends to shift $3.6 billion to wall construction as part of a series of moves the administration is using to get around the congressional logjam when it comes to wall funding.

The administration touts that approximately 60 miles of “new border wall system” have been built so far. Critics note that this represents replacement wall in areas that already had existing barriers and fencing. But administration officials have pushed back, saying what's being replaced is largely landing-mat barriers that can be pushed over or "Normandy-style" crosses that can be stepped over. Administration officials pose the Seussian question: If a wall can easily fall, then is it even a wall at all? 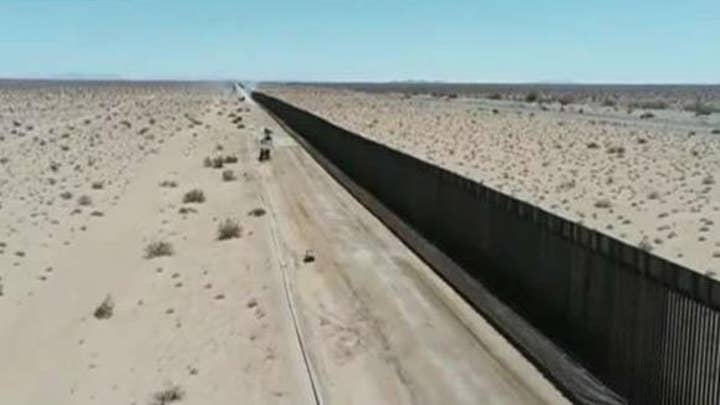 “When you take that down and you put in what is being built now — that is a new wall,” one official said at a briefing in Washington earlier this week. “It’s 30 feet tall, it’s embedded in concrete, the structure is incredibly strong, it has anti-climbing techniques, it’s also got additional technology — lighting, access roads, etc so it really is a wall system. So anywhere the wall is being built, it’s new wall.”

Arguments about new or replacement wall aside, the administration is now planning an aggressive push to build more wall by the end of next year — which happens to be when the presidential election is being held. "Build the wall" will surely return to the rally rotation as the Trump re-election campaign moves into full swing.

Perhaps driven in part by political urgency, Trump has lit a fire under his team to get the job done. According to The Washington Post, he told aides he wants the 500 miles done by Election Day and has suggested he would pardon officials if they break the law. The White House has denied that Trump floated pardons.

Much of that 500 miles is what the administration is calling “new linear wall” – wall where there was no structure before. Officials say they are anticipating building 100 miles of “new linear wall” miles in the Rio Grande Valley sector alone.

As for where, they say they are listening to agents on the ground, and different sectors have different needs. In the Laredo sector, for instance, agents told Fox News last month that the wall was a top priority as they face a higher number of single adult males crossing the border and evading capture.

Democrats, meanwhile, have objected to the cost of the wall and the project as a whole. On Thursday, Sen. Patrick Leahy, D-Vt., noted that Trump had promised Mexico would pay for the barrier and called it "an ineffective wall that was based on a cynical campaign promise, and bears no relation to the real national security issues this country faces."

Administration officials deny that this amounts to a presidential vanity project..

“This isn’t like we’re building just to show we’re making progress, we’re building where Border Patrol have said their priorities are,” another official said.

They are also saying they are putting up wall quicker than past administrations. After the Secure Fence Act passed in 2006 under the Bush administration, the path from appropriations to digging was a two-year cycle; now officials say they’ve been getting the process done in less than a year.

Additionally, one of the hurdles facing the administration has been that much of the territory they need for the project is on privately owned land -- requiring the government purchase land, a lengthy process. Now that a lot of that land has been bought, officials say the pace can pick up and crews can build multiple structures simultaneously.

“We’ve been doing that, so you’re going to see the pace of this construction of new linear miles in areas that were not federally owned accelerate over the coming weeks and months, especially when the DoD gets in the game," the official said. "So we’re going to go from two to three miles a week to a lot more.”

Trump supporters will be keeping a close eye on what is going on with wall construction. On Monday night, Trump attended a rally in Fayetteville, N.C., where he tagged Democratic House candidate Dan McCready as a proponent of "sanctuary cities."

"We're building that wall and it's very big," he said.

The sustained chant that followed was both a message of support and an instruction to the president: "Build the wall," they chanted.