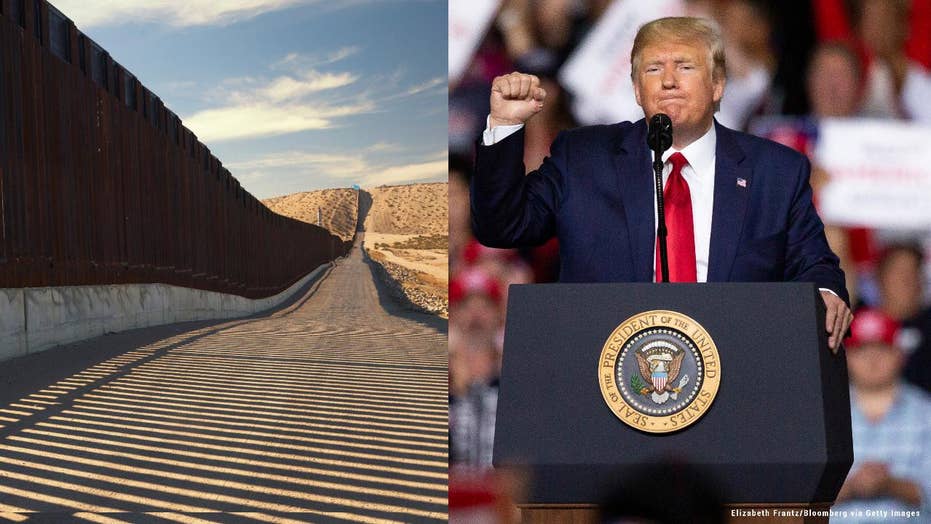 Illegal immigration along the U.S.-Mexico border has slowed in recent months and officials on the frontlines credit in part President Trump's dealings with Mexico. Fox News accompanied agents to see the impact first-hand.

LAREDO, Texas  – When people think of the southern border, it may bring to mind a vast, open desert, flecked with cacti and etched by a thin trail of fencing.

Not so here in Laredo Sector, where the Rio Grande narrows and separates the bushy banks of Mexico and the U.S. by mere feet of water. Migrants, predominantly adult men from Mexico rather than the Central American families common in other sectors, take advantage of the low river surrounded by trees. They know, as do the smugglers who assist illegal immigrants, that if they scramble across the water and into the trees, they are a short sprint from disappearing in Laredo amid its many fast-food restaurants, tiny houses and money exchanges.

But lately, the crisis-level surge in crossings has eased.

On an airboat tour Tuesday, accompanied by Fox News, Border Patrol members carved through the Rio Grande looking for trouble, slowing down occasionally to peer into the trees. This time, they didn’t find it.

That’s not to say the migrants aren’t crossing – they are – but the numbers are down significantly from the levels seen in the spring. And while the furious heat of the summer months is a factor in discouraging migrants, Sector Chief Patrol Agent Felix Chavez says that the Trump administration’s push to get Mexico to cooperate with immigration efforts has paid dividends.

“We’ve been monitoring the apprehension numbers closely, specifically going back 70 days before June 10 and 70 days after June 10,” Chavez told Fox News. “And what we’ve seen here in Laredo Sector is a reduction in 30 percent in our apprehension numbers, southwest border-wide numbers are down 38 percent.”

Trump announced in May that June 10 was the date he would impose tariffs on Mexico if it did not help the U.S. combat the migration crisis. Trump ultimately suspended the tariffs days before after a deal was reached that included Mexico taking “unprecedented steps” to boost enforcement, including deploying its National Guard, while the “Remain in Mexico” policy by which asylum applicants were returned to Mexico for their hearings was expanded.

In Laredo, the distance between Mexico and the U.S. is just a short, but risky, swim. (Adam Shaw/Fox News)

Officials at Laredo’s Border Patrol sector on Tuesday briefed U.S. Citizenship and Immigration Services (USCIS) Acting Director Ken Cuccinelli, who is visiting the border this week as part of his efforts to understand the immense migration challenge, on the status of their efforts.

“Much like yesterday when we viewed the Remain in Mexico courtrooms that are being put up, it’s really just a granular understanding of how things are working on the ground as opposed to how we all talk about it on paper in Washington,” Cuccinelli told Fox News. 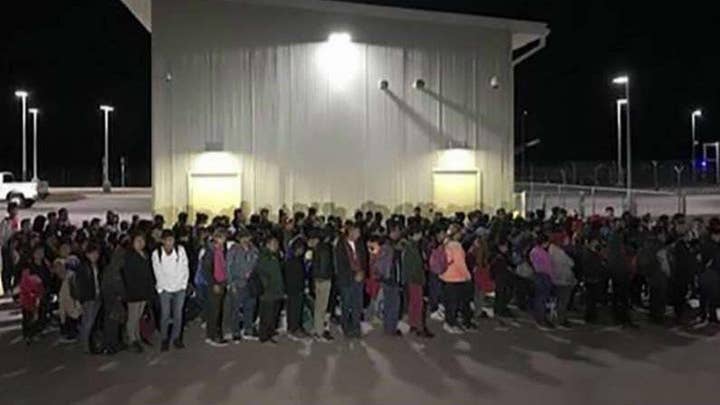 Results are being seen across the entire border. CBP said this month that it encountered 82,049 people in July, down 21 percent from June when there were 104,344 people and down 43 percent from May. The number of families and minors crossing the border also dropped.

Chavez says that, along with efforts by the DHS toward further collaboration with Central American governments, it is helping reduce the once-overwhelming flow.

“So ever since June 10, I think a lot of things have been happening. DHS has done a lot in terms of what they have been doing with Central America, we’ve seen Mexico come to the table, we’ve also seen the Migration Protection Protocols,” he said, referring to the official name of the “Remain in Mexico” policy. “So all those things need to continue.”

Officials emphasize that this is not a case of “crisis over.” Summer months have in years past seen respites in migrant flows, only to see them pick up again once the mercury drops. And the numbers are still stark. In the fiscal year overall, the number of apprehensions is up, while 70 migrants have died in Laredo Sector -- mainly because of the heat, but some drown in the deceptively gentle-looking Rio Grande. Agents have also made 2,470 rescues in fiscal 2019, preventing the number of deaths from being significantly higher.

Border Patrol officials say they need more infrastructure as well as changes in the law related to trafficking, the asylum process and the Flores agreement that limits how long minors can be detained. A change expanding that detention time was announced by DHS Wednesday morning, though this led to criticism that it amounted to a "cruel attack on children" by allowing the government to "put more kids in jail for longer."

Earlier Tuesday, Cuccinelli had a bird's-eye view of the border when he went on an operational mission conducted by Customs and Border Protection’s Air and Marine Operations (AMO), which conducts air and maritime missions at the border and in the nation’s interior. Fox News accompanied him.

In that sector, numbers have dropped from a high of approximately 2,400 a day in May to approximately 800 a day currently. But again, agents weren’t celebrating, and neither was Cuccinelli -- not yet anyway. In the chopper, soaring above seemingly endless acres of Texas desert, farmland and swamp, he watched as the chopper diverted course, dove close to the ground and helped agents locate and capture a handful of migrants moving in the summer heat.

The mass caravans are less frequent now than they used to be, but they still come. Earlier this month in New Mexico, agents apprehended nearly 200 migrants, the second-largest group apprehended in August. In May, the Border Patrol apprehended 48 groups of 100 migrants or more; this month they picked up fewer than five.

Cuccinelli praised Trump’s efforts in bringing Mexico to the table: “He took a tactic that none of his predecessors, Democrat or Republican, before him have taken and it’s been very successful."

“Here they were swamped in May, we’re still at crisis numbers, but it seems so low compared to May and those crossings and apprehensions continue on a genuine downward decline,” he told reporters after the flight.

Cuccinelli, who has made sweeping changes to the U.S. legal immigration system since becoming acting director of USCIS in June, said that further cooperation – including a recent “safe third country” deal with Guatemala – are all tools needed to keep the numbers dropping.

“Integration in the region -- not just here in the U.S. and in Mexico but in the Northern Triangle as well and beyond -- is coming together slowly but surely to help all of us work together to have the tools to keep driving down the raw numbers that have really created the crisis on our southern border,” he said.