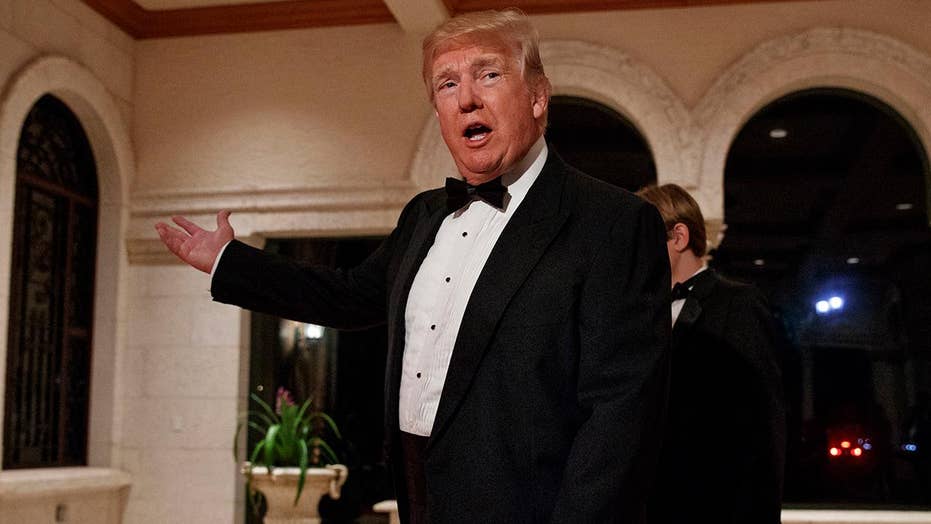 Kevin Corke reports from the White House on the president's tweets.

President Trump kicked off the new year praising the people of Iran for “acting against” the regime, while accusing former President Barack Obama of helping Tehran fund “terrorism.”

The spending on terror and proxy wars is part of what demonstrators are protesting.

“The people of Iran are finally acting against the brutal and corrupt Iranian regime. All of the money that President Obama so foolishly gave them went into terrorism and into their ‘pockets.’ The people have little food, big inflation and no human rights. The U.S. is watching!” Trump tweeted early Tuesday.

The potential new sanctions, first reported by the Wall Street Journal and confirmed by Fox News, would be imposed in response to human-rights violations.

"The world needs to see what's happening in Iran right now," White House Counselor Kellyanne Conway said on "Fox & Friends" Tuesday. "That's what freedom looks like. [Trump] doesn't want to remain silent, as too many people were silent in 2009."

The protests are the largest show of dissent since the Green Movement rallies of 2009. At the time, millions of demonstrators rallied in opposition to the controversial election of then-President Mahmoud Ahmadinejad.

Trump has clashed with Iranian President Hassan Rouhani in recent days as protests throughout the Islamic Republic continued, bringing the death toll to 12. The president also has continued to blast the Obama administration for its controversial nuclear deal.

“Iran is failing at every level despite the terrible deal made with them by the Obama Administration. The great Iranian people have been repressed for many years. They are hungry for food & for freedom. Along with human rights, the wealth of Iran is being looted. TIME FOR CHANGE!” Trump tweeted early Monday.

The deal Trump referenced included the Obama administration’s unfreezing of more than $100 billion in Iranian assets and cash payments of more than $1 billion for Iran’s pledge to halt their pursuit for nuclear weapons for at least 10 years.

The president’s tweet comes as a leaked report surfaced, showing Iran’s Supreme Leader Ayatollah Ali Khamenei met with political leaders and heads of the country’s security forces to discuss how to tamp down the deadly nationwide protests against them.

The memo, first obtained by Fox News, said that the unrest hurt every sector of the country’s economy and “threatens the regime’s security.” The memo also said a “red alert” had not yet been declared, which would lead to military intervention in the protests.

The memo also mentioned Trump’s support for the protesters, saying “The United States officially supported the people in the streets,” and the U.S. and the West “have all united in support of the Hypocrites” – the regime’s description of the People’s Mujahedin of Iran (MEK), which is one of the groups taking part in the protests.

Israeli Prime Minister Benjamin Netanyahu joined Trump in his support for the protesters, issuing a statement on Twitter on New Year’s Day.

“The Iranian regime tries desperately to sow hate between Iranians and Israelis. They won’t succeed. When this regime finally falls –and one day it will –Iranians and Israelis will be great friends one again. I wish the Iranian people success in their noble quest for freedom,” Netanayhu wrote.

At this point, Iran has blocked access to Instagram, as well as Telegram, a popular messaging app used by activists to organize demonstrations.

In Tehran alone, about 450 protesters have been arrested in the last three days, the semi-official ILNA news agency reported. Authorities have not released a nationwide figure for arrests so far.

Musa Ghazanfarabadi, head of Tehran’s Revolutionary Court, warned protesters Tuesday that those arrested could face the death penalty when they come to trial.