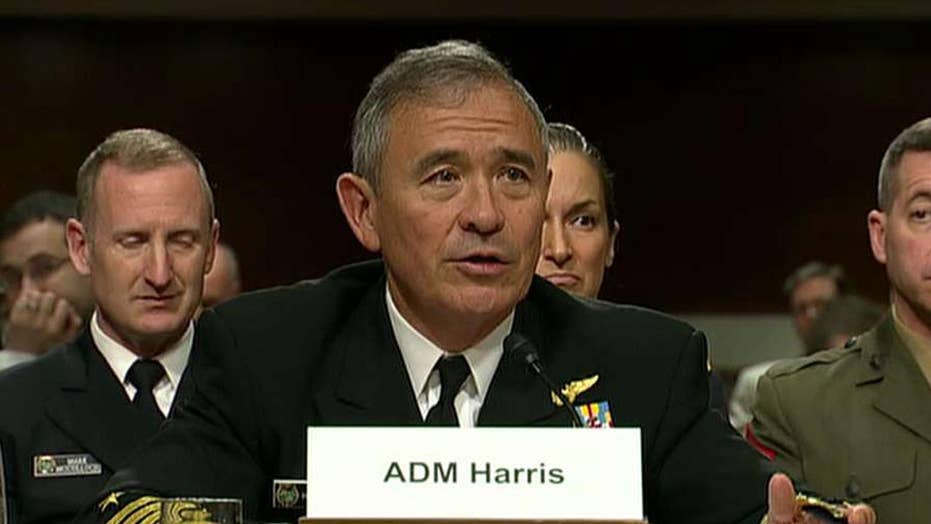 Leland Vittert reports from the Pentagon

The commander of American forces in the Pacific warned Thursday that China has a huge advantage over the United States when it comes to their stockpile of land-based short- and medium-range missiles – some which can carry nuclear warheads.

Adm. Harry Harris told senators on Capitol Hill that a decades-old arms treaty between the United States and Russia prohibits the U.S. from building its own arsenal of missiles that can fly between 310 and 3,400 miles.

“How many missiles do you have that fall into that range?” Sen. Tom Cotton, R-Ark., asked.

“I have none, sir,” Harris replied.

Harris estimates that 90 percent of China’s land-based missile forces fall into the category prohibited by the Intermediate-Range Nuclear Forces Treaty (INF), signed between then-presidents Mikhail Gorbachev and Ronald Reagan in 1987.

Yet last month, the vice chairman of the Joint Chiefs of Staff told Congress that Russia was violating the treaty.

“We believe that the Russians have deployed a land-based cruise missile that violates the spirit and intent of the Intermediate Nuclear Forces Treaty,” Gen. Paul Selva told the House Armed Services Committee.

“The system itself presents a risk to most of our facilities in Europe,” he added. “We believe that the Russians have deliberately deployed it in order to pose a threat to NATO.”

Harris was asked Thursday by Cotton if the United States should withdraw from the treaty because the Russians are violating it, and he kept the door open.

“I do think we should look at renegotiating the treaty,” he said. “We should consider that because, as you say, there are only two countries that signed on to and one of them doesn’t follow it. That becomes a unilateral limitation on us.”

The INF Treaty was signed at the time of a “bi-polar world” occupied by the United States and Russia, according to Harris. Now, other powers are developing their technology and arsenals – Iran and North Korea, in addition to China, are free to build thousands of short- and medium-range missiles not bound by the treaty, he said.

The INF treaty does not include missiles launched by ships or aircraft.

Harris told senators he is “worried” about the Chinese DF-21 missile and DF-26 missile, with a range of over 2,000 miles.

In 1991, the United States removed its land-based nuclear-capable missiles from South Korea.

“Could you use them to launch a surprise decapitation strike?” he said. “That's why Gorbachev agreed to the treaty in the first place -- the Russians are much worse off in a world with many capable medium- and intermediate-range ballistic and cruise missiles."