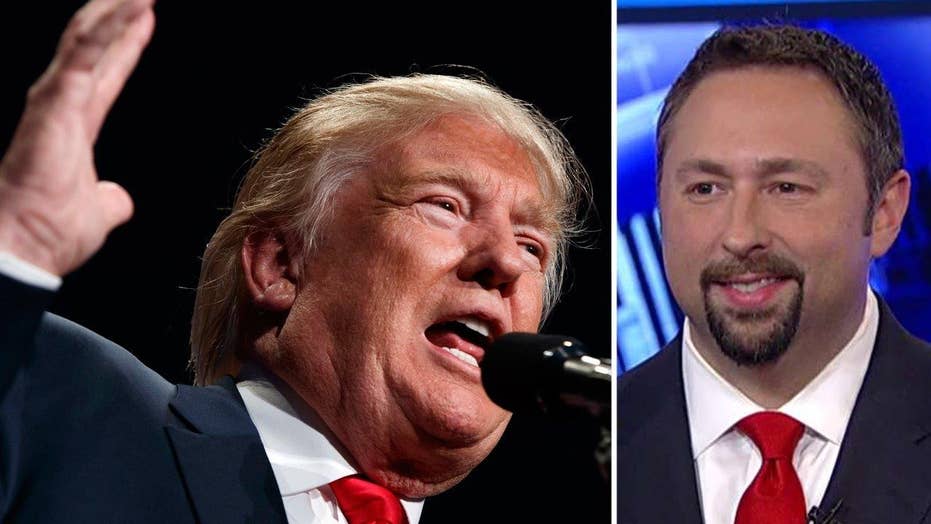 TRAILING TRUMP NEEDS DEBATE BUMP
As Hurricane Matthew batters the Southeastern coast, it is also forcing the presidential candidates to shelter in place.

The second debate is two days away and the state of the race in the wake of the first contest is quite clear:

* Hillary Clinton’s lead over Donald Trump in the Halftime Report Average of reliable national polls has grown by almost 5 points in the past week.

* Clinton’s average share of the vote in a head-to-head matchup is now 49.8 percent compared to Trump’s 43.2 percent.

* The Fox News Electoral Scorecard, which reflects shifts in state polls, shows Clinton above the 270-electoral vote threshold to win. A week ago, she was under the 270 line and had been losing ground.

* In the new map, if Trump won all of the GOP-leaning states and all five of the “toss-up” states, he would still come up short.

So you’re saying, “To hell with the polls!” That’s fine. The rallying cry of every trailing candidate, “the only poll that really matters is on election day” is quite true. But recognizing shifts in the electorate, especially tectonic ones, are important.

If, however, you take the position “To hell with the polls!” on the grounds that you don’t believe in public opinion research or think that re-tweets or online contests are better measures of electoral performance, we can’t really help you. We have good data to use, and on that we shall rely. This may be the election that breaks the 70-year streak of successful pre-election polling, but we doubt it.

In fact, we are seeing some of the consequences of survey trutherism even now. When Trump and many of his supporters were aggressively attacking polls and pollsters during both his post-convention swoon and in the week after the first debate on Sept. 26, it was an invitation to pretend that the race had not changed and that Trump and his campaign, therefore, didn’t need to change either.

The latest survey from Quinnipiac University is out today and it reaffirms what other pollsters have found since Trump’s debate performance and, more importantly, his mishandling of the week that followed: female voters have moved sharply against the Republican nominee.

A 7-point swing toward Clinton among women drove the race from a statistical tie to a clear Clinton advantage.

As Trump makes ready for the second debate, he needs to not only recognize the truth – he is trailing and time is running out – but understand how to change his course accordingly.

Sunday’s debate is a town-hall format – the perfect setting for a pivot.

Many Republicans were frustrated by Trump’s missed opportunities to attack Clinton in the first debate, and the candidate himself has promised to be much tougher on his rival this time around.

If Trump can win over the crowd in the debate hall with some slightly self-deprecating humor and then keep his responses on the rails, there’s no reason that he can’t be basking in “art of the comeback” headlines by Monday morning.

If he snarls and tries to tear Clinton down in front of an uneasy audience it would be a compounding disaster and quite possibly the end of his presidential hopes.

THE RULEBOOK: POLITICS AND THE WATER’S EDGE
“If [foreign nations] see that our national government is efficient and well administered, our trade prudently regulated, our militia properly organized and disciplined, our resources and finances discreetly managed, our credit re-established, our people free, contented, and united, they will be much more disposed to cultivate our friendship than provoke our resentment. If, on the other hand, they find us either destitute of an effectual government… or split into three or four independent and probably discordant republics or confederacies…  what a poor, pitiful figure will America make in their eyes! How liable would she become not only to their contempt but to their outrage, and how soon would dear-bought experience proclaim that when a people or family so divide, it never fails to be against themselves.” – John Jay, “Federalist, No. 4”

TIME OUT:  DECISIVE DUEL
On this day 236 years ago militia proved its mettle in a battle that would change the course of the American Revolution. History.com: “Patriot irregulars under Colonel William Campbell defeat[ed] Tories under Major Patrick Ferguson at the Battle of King’s Mountain in South Carolina. Major Ferguson’s Tory force, made up mostly of American Loyalists from South Carolina and elsewhere, was the western wing of General Lord Cornwallis’ North Carolina invasion force. One thousand American frontiersmen under Colonel Campbell of Virginia gathered in the backcountry to resist Ferguson’s advance. Pursued by the Patriots, Ferguson positioned his Tory force in defense of a rocky, treeless ridge named King’s Mountain. The Patriots charged the hillside multiple times, demonstrating lethal marksmanship against the surrounded Loyalists.

Unwilling to surrender to a “band of banditti,” Ferguson led a suicidal charge down the mountain and was cut down in a hail of bullets. After his death, some of his men tried to surrender, but they were slaughtered in cold blood by the frontiersmen, who were bitter over British excesses in the Carolinas. The Tories suffered 157 killed, 163 wounded, and 698 captured. Colonel Campbell’s force suffered just 28 killed and 60 wounded.”

HURRICANE WARNING: POLITICIZE AT YOUR PERIL
AP:  “The candidates, their aides, their surrogates, even some of their ads, went quiet Friday, as swing-state Florida was pounded by Hurricane Matthew, coastal residents hunkered down in their homes and the 15-months of constant political chatter almost disappeared. Donald Trump and Hillary Clinton kept far away from the storm at their home bases in New York. Both planned to use most of the day to prepare for their second debate on Sunday night, a town-hall-style forum in St. Louis. The pause was a reminder of the possibilities and perils of campaigning during a crisis…Both Clinton and Trump appeared to be moving carefully, for now. The campaigns spent Thursday moving staff and volunteers, closing offices and canceling events in the path of the storm, as many Floridians heeded calls to evacuate. In Florida, the Clinton campaign pulled its ads from the Weather Channel, amid criticism about insensitivity, and the Trump team pulled its negative TV ads.”

POWER PLAY: CAN TRUMP RESET THE RACE IN ST. LOUIS?
Will the second presidential debate cement Clinton’s lead over Trump or reset the race a month out from Election Day? The Washington Examiner’s Susan Ferrechio & National Journal’s Josh Kraushaar share “must do’s” ahead of Sunday’s town-hall debate. WATCH HERE

As goes Ohio ... ? - Ohio should be Trump country, but a new Monmouth University poll has Clinton up by two points in the Buckeye State, considered a must-win for Trump. Chris Stirewalt asks our panel: What’s happening in Ohio & what does it tell us about November? WATCH HERE

AUDIBLE: PREPPERS
“This was set up a little while ago. They were going to cancel it, and I said, 'Why are you going to cancel it?' You want to debate prep – I said, 'Forget debate prep,' give me a break. You really think Hillary Clinton is debate prepping for three of four days? Hillary Clinton is resting, OK, she’s resting.” – Donald Trump denying that a Thursday night town hall in New Hampshire with a format modeled after Sunday’s town hall debate in St. Louis.

A check-up on how physicians sort themselves politically – NYT

Survey: Still a month to go, half of voters already contacted by campaigns – Pew Research Center

Continetti: Is America prepared for another war? – WashFreeBeacon

FROM THE BLEACHERS
“Could you say that Hillary may have a HACKING COUGH? I really enjoy your insightful commentary, done with such great vocabulary and metaphoric humor.” - Bob Wyrick - H. Cardenas, Tabasco, Mexico, formerly of Houston, Texas

“Maybe this hurricane is for Trump. Matthew 20:16 and the last shall be first and the first shall be last:))” - Greg Burnside, Edmonds WA

“The crux of Hillary’s run for POTUS is her portrait hanging in the White House for posterity, pure and simple. I’d bet it’s already painted and waiting.” - Gil Breaux, Beaumont, Tx

LOVELY PLACE YOU HAVE HERE
Australian Broadcasting Company: “Ray and Sue Jeffrey were entertaining family on the back deck of their Nerang home which overlooks the pool when someone spotted a snake. ‘I called my wife out who was in the kitchen and then she looked down there was this tangled mess of snakes,’ Mr Jeffrey told the ABC.

Mr Jeffrey quickly called snake catchers Samuel Howard and Katie Eales to their home…Howard said [eight] was an unusual number of snakes to be found and a record for him…‘The water that was sitting in the pool was inundated with little frogs and cane toads and tree snakes love eating frogs,’ he said. ‘Because the pool was empty there was lots of cracks in the wall of the pool and tree snakes love living in little cracks. ‘So we think they probably all had a lovely home in there with a little water source, heaps of food and lots of little cavities they could hide in, and now it is breeding season they have all come out together and found each other.’”

AND NOW A WORD FROM CHARLES…
“[I]gnore the bait. He [Trump] should just dismiss all the quotations that he hears the way that Pence did, deny it ever happened and ignore the fact checkers the next day.” – Charles Krauthammer on “Special Report with Bret Baier” Watch here.