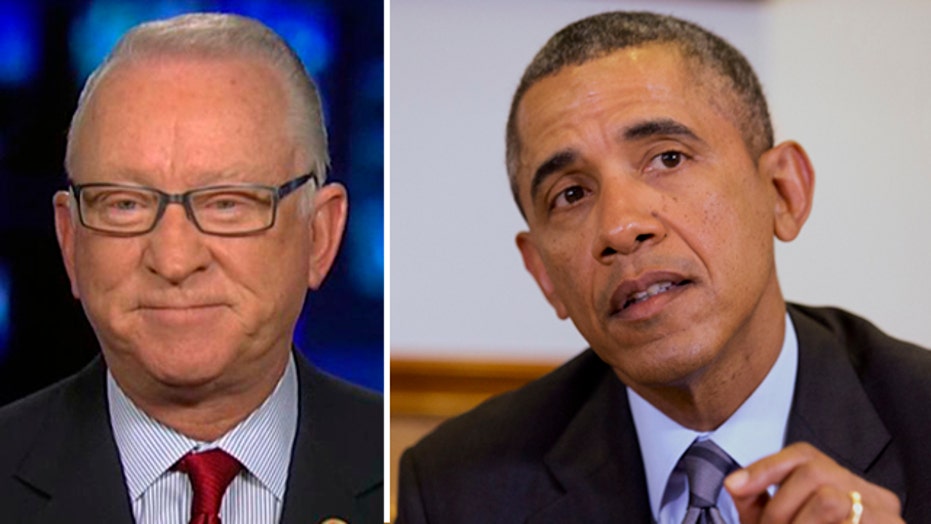 Top Republican says troops are not being given credit

The head of the House Armed Services Committee accused President Obama of ignoring the successes of the Afghanistan war, in a scathing address that also claimed White House staffers inappropriately meddled in military affairs.

Rep. Buck McKeon, R-Calif., delivered the lengthy and detailed speech on Monday at the National Press Club in Washington, D.C. As the war winds down and the Obama administration prepares to withdraw most, if not all, U.S. troops, McKeon complained Obama has only talked about the war "a handful of times" since taking office. He charged Obama has even "openly campaigned" against his own strategy.

"So, if the president of the United States won't give this speech, I will," he said. "For the life of me, I can't figure out why the president hasn't taken credit for these victories. The gains since 2009 are three-fold -- strategic, diplomatic and moral."

McKeon used the address to highlight what he described as the successes of the war, and to urge the United States not to lose sight of its gains as security is handed over to the Afghan government.

"You don't need to look past Baghdad to see how quickly gains can unravel," McKeon said.

He claimed that the sitting president has done little to draw attention to what has been achieved in Afghanistan, and that Obama's White House undermined the military while in office.

"Now I think it was the height of foolishness to announce a surge and -- in the very same breath -- the end date for the surge. I think the idea of military strategy being done by White House staffers rather than military planners, as some reports have suggested, is worthy of a head-examination," he said, seemingly in reference to reports about White House officials turning down recommendations for more troops.

He added: "But, even though the way that this White House has run this war has been outrageous, with White House staffers telling four-star generals their business, there has been unmistakable progress."

Asked for comment on McKeon's remarks, a White House spokeswoman noted Obama has repeatedly spoken about the Afghanistan war, pointing in part to this year's State of the Union address.

In that address, Obama touted that "the United States is more secure" because of America's troops. He said the U.S. will "complete our mission" in Afghanistan, and told an emotional story about one veteran, Sgt. 1st Class Cory Remsburg, who was badly wounded -- and who was in attendance that night as a guest.

McKeon on Monday cited major achievements like the training of the Afghan security forces, which just a few years ago were seen as hopeless by some trainers.

"These guys were taking their baby steps not five years ago. Today, they're holding onto territory that took a 50-nation coalition to win," he said.

McKeon claimed the biggest uncertainties are "diplomatic" and "moral." He said that, despite ongoing problems getting Afghan President Hamid Karzai to sign a vital security agreement, it's "hard to understate the diplomatic successes of the past several years."

Public opinion of the Afghanistan war has fallen steadily since after the 9/11 attacks, when the American people were overwhelmingly in favor of the war. Gallup last week reported that for the first time since 2001, more Americans consider the war a mistake than not.

The results, while within the margin of error, showed 49 percent say involvement was a mistake, compared against 48 percent who say it was not. The poll of 1,023 adults was taken Feb. 6-9. The margin of error was 4 percentage points.

McKeon noted poll numbers in his speech on Monday and said "the American people are sick and tired of this war."

But he said: "Neither polls nor the press paint the full picture."