Rep. Rashida Tlaib, D-Mich., called for a federal minimum wage of $20 per hour at an event in Detroit on Sunday night, prompting mockery from conservatives and threatening to force mainline Democrats in the 2020 presidential race to address the issue in upcoming debates.

Tlaib's comment came during remarks to the Restaurant Opportunities Center of Michigan and the labor rights group One Fair Wage, and were recorded by the conservative political action committee America Rising. The Democrat-controlled House of Representatives passed a $15 federal minimum wage bill last week, but it has little chance of passing the GOP-controlled Senate.

Tlaib, referring to the federal minimum wage for those workers, said that "tipped employees make $2.13 per hour, federally."

"Think about that for one minute. People cannot live on those kind of wages, and I can't allow people to be living off tips, you know, relying on tips for wages. It's just not enough to support our families. ... By the way, when we started it, it should have been $15," she said at the event, titled "Server for an Hour."

In a 231-199 vote along party lines on Thursday, the House passed legislation that would increase the minimum wage to $15 an hour, more than double the current rate of $7.25. In an even more drastic increase, the bill calls for having the same minimum wage for tipped workers, raising it from $2.13 an hour.

Meanwhile, some libertarian scholars, including New York University Law School Professor Richard Epstein, have called for eliminating the minimum wage entirely, saying the market -- along with prohibitions against worker abuse -- is more efficient than the whims of politicians.

Tlaib's office did not respond to Fox News' request for comment, but her remarks were derided by conservative commentators.

"They should make it $1,000 an hour and cure income inequality inside of a month, obviously," joked Ben Shapiro. "These radical Democratic policy proposals are the political equivalent of the pitch for the Fyre Festival."

Democrat presidential contenders are set to debate again on July 30 and 31, and could be asked about Tlaib's now-viral proposal. The party's embrace of once-radical proposals -- including Medicare-for-all, health care for illegal immigrants, and decriminalization of border crossings -- has alienated moderates, some analysts contend.

Tlaib, a member of the progressive freshman "squad" on Capitol Hill, has attracted an outsize share of attention in recent days. Over the weekend, video resurfaced showing Tlaib calling out to President Trump as security removed her from a meeting at the Detroit Economic Club in August 2016.

But her minimum wage proposal has her farther afield on the issue than virtually all other prominent Democrats. The nonpartisan Congressional Budget Office (CBO) recently concluded that a $15 federal minimum wage could result in 3.7 million people becoming unemployed -- far higher than House Democrats' estimates -- as employers struggle to make payroll and respond by slashing jobs and hours.

Republican leaders have said a minimum wage hike would be “devastating” for middle-class families, citing CBO research finding that it would also reduce business income, raise consumer prices and reduce the nation’s output. Overall, the CBO said the move would reduce real family income by about $9 billion in 2025 -- or 0.1 percent.

The minimum wage fight has spilled over into the Democrat presidential race in recent days. Over the weekend, Democrat presidential candidate Bernie Sanders announced he will cut staffers' hours so that they can effectively be paid a $15-an-hour minimum wage, prompting mockery from critics who said the move is more evidence that Sanders' plan to raise the national minimum wage is hypocritical and would only lead to less work and more unemployment. 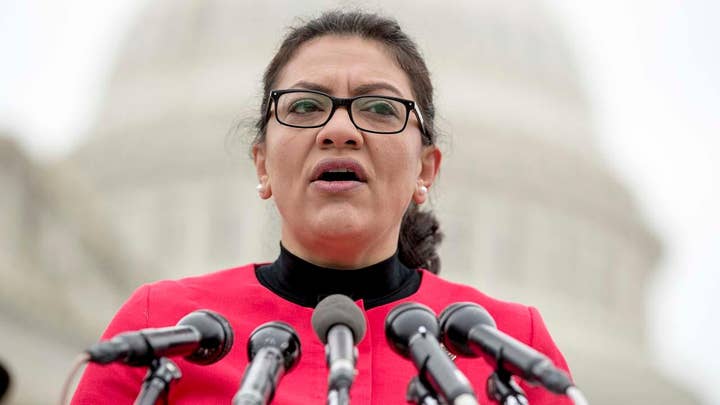 "It’s a shame Representative Tlaib didn’t hear that Bernie Sanders is cutting his staff’s hours to meet their demands for a $15 minimum wage," Ortiz told the paper. "If she won’t listen to job creators about the unintended consequences of a higher minimum wage, maybe she’ll listen to a socialist politician."

The Washington Post first reported last Thursday that Sanders' field staffers were upset that Sanders had championed a $15 minimum wage on the campaign trail, and made headlines for railing against major corporations who pay "starvation wages" -- even as his own employees made "poverty wages."