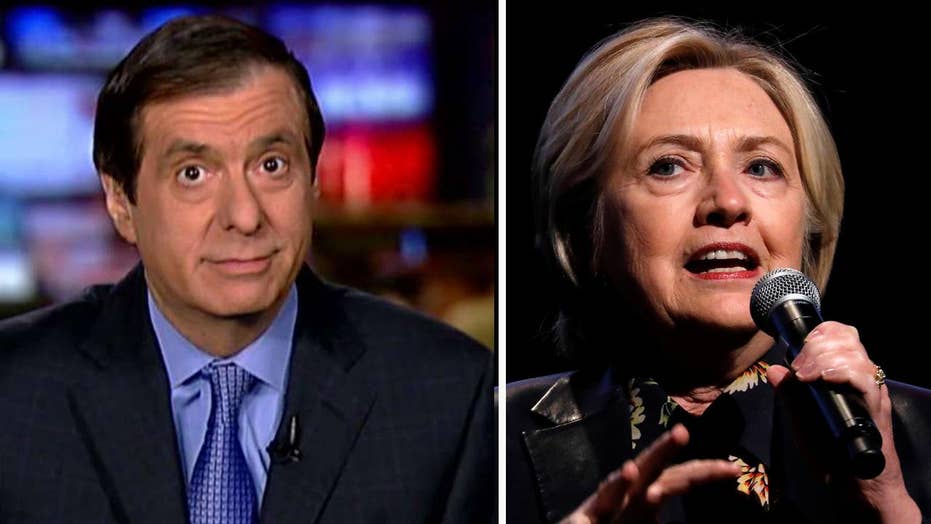 'MediaBuzz' host Howard Kurtz weighs in on Hillary Clinton insulting Trump voters once again, this time to explain the outcome of the 2016 election.

The Democrats are gearing up for the midterms, emboldened by the apparent razor-thin win by Conor Lamb in a Pittsburgh-area district that Donald Trump carried by 20 points.

And they are starting to maneuver for 2020, with the likes of Kirsten Gillibrand, Kamala Harris, Terry McAuliffe and others maneuvering to take the party past Bernie Sanders and Joe Biden.

And some Democratic lawmakers are distancing themselves from her latest remarks.

Which, not to put too fine a point on it, takes us back to one of the worst moments of her campaign, going after the deplorables.

It's one thing to attack Trump, the man who beat her in the Electoral College. It's another to denigrate his voters.

Here she is at a conference in Mumbai, talking about how she won the coasts but lost the "middle" of the country:

"I won the places that are optimistic, diverse, dynamic, moving forward," Clinton said. "And his whole campaign — 'Make America Great Again' — was looking backward. You know, you didn't like black people getting rights, you don't like women, you know, getting jobs, you don't want, you know, to see that Indian-American succeeding more than you are. Whatever your problem is, I'm going to solve it."

Really? Does Clinton not have a sense of how condescendingly awful that sounds?

Does she believe that's why she lost Michigan, Wisconsin and Pennsylvania? Not that Trump appealed to struggling working-class voters, but that his supporters resent women, blacks and legal immigrants?

There was more. Clinton suggested white women voted for Trump because of "ongoing pressure to vote the way that your husband, your boss, your son, whoever, believes you should."

Seriously? While that may have happened in certain instances, does the first female presidential nominee of a major party believe that women are that ... subservient? I sure don't.

Hillary's party is not happy with this latest flashback.

"Even the staunchest Clinton allies as well as longtime advisers say the comments were cringeworthy and ultimately detrimental to Democrats," says The Hill.

"I think they were expressing their frustration with the status quo. I may not have agreed with their choice, but I certainly respect them. And I don’t think that's the way you should talk about any voter, especially ones in my state."

Ohio's Sherrod Brown told the Huffington Post: "I don't really care what she said. I just think that that's not helpful."

Hillary Clinton is entitled to say whatever she wants. She doesn't have to quiet down just because she’s frustrating other Democrats.

But this is an unfortunate throwback to the comments she made in the fall of 2016:

"You know, to just be grossly generalistic, you could put half of Trump's supporters into what I call the basket of deplorables. Right? The racist, sexist, homophobic, xenophobic, Islamaphobic—you name it."

That led some Trump backers to proudly identify themselves as deplorables.

Hillary Clinton blew a winnable election, but she did win the popular vote. Does she want to be remembered for disdaining the middle of the country?