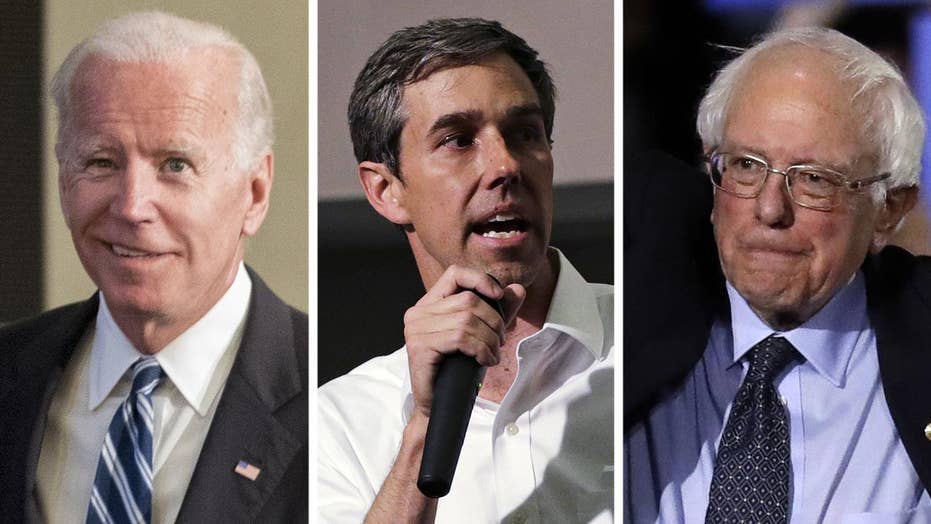 Can Biden compete with Beto and Bernie's fundraising?

Former Vice President Joe Biden reportedly tells close friends and supporters that he intends to run for president in 2020 but has concerns about competing with Beto O'Rourke and Bernie Sanders' cash flow.

The fundraising pitches from the 2020 Democratic presidential candidates are coming in fast and furious.

“If you've been waiting to make your first donation, there is no better time than right now – before Sunday's deadline,” highlighted an email from Sen. Bernie Sanders campaign.

An email from former San Antonio, Texas mayor and former Housing and Urban Development Secretary Julian Castro’s campaign alerted that “we are just three days out from our first official FEC deadline.”

And the campaign of Sen. Kirsten Gillibrand of New York spotlighted that “this is last call – I’m counting on your help right now.”

Sunday is the last day candidates can bring in campaign cash in the first fundraising quarter for the 2020 presidential race. Starting as early as Monday, the candidates can start reporting their fundraising hauls, and the numbers will be repeatedly analyzed and scrutinized.

Fundraising is considered an important barometer of a candidate's popularity and a campaign's strength. The cash can be used by a candidate to build an organization and hire staff and consultants, increase voter outreach efforts, travel and fund ads.

Democratic strategist Jesse Ferguson, a presidential campaign veteran, highlighted that the numbers are an important “data point to show us how campaigns are doing.”

“The numbers will surely be over-interpreted, but they will tell us who is building the base of support needed in order to stay in for the long haul,” explained Ferguson, who served as a senior spokesman on the 2016 Clinton presidential campaign.

And with an extremely large Democratic field, a positive report will help a candidate build momentum and grab media attention.

In 2007, then-Sen. Barack Obama of Illinois was already a candidate on the rise, but his status as a frontrunner alongside then-Sen. Hillary Clinton of New York was only enhanced by an eye-popping first quarter campaign cash figure.

On the flipside, a lackluster report could kick off a campaign’s death knell.

“There’s going to be a natural thinning of the herd and the Q1 fundraising numbers will be an inflection point on that journey,” noted longtime GOP strategist Colin Reed.

This election cycle, there’s even more at stake, especially when it comes to the number of contributors to a campaign.

The first Democratic nomination debates are less than three months away, and for the contenders to make the stage, they must pass two key thresholds. One is a traditional metric –  polls. They must reach at least one percent in three surveys.

The other involves fundraising – candidates must receive contributions from at least 65,000 donors in at least 20 states.

“The numbers will show us who is building the grassroots support needed to get on the debate stage,” Ferguson noted.

The campaigns are stressing the threshold in their fundraising pleas.

“We're still 3,578 founding donors short of our critical goal, and time's running out before our first FEC filing deadline. If we want to get Kirsten on the debate stage and prove to everyone that a community-led campaign like ours can win, we absolutely have to close this gap,” the Gillibrand campaign highlighted this week in an email to supporters.

And Castro pleaded in a message to supporters that “the first Democratic Presidential debates were just announced. Before my very first End of Quarter Deadline in 72 hours, will you pitch in $13 to help me qualify?”

The campaigns will start revealing their numbers starting Monday and must file their figures with the Federal Election Commission by April 15.

But even before the deadline, we know a few things.

Former Rep. Beto O’Rourke of Texas hauled in $6.1 million in the first 24 hours after he launched his campaign earlier this month. That figure slightly edged out Sen Bernie Sanders of Vermont, raised $5.9 million in his first day as a candidate.  Sanders said this week that he’s already received 713,839 contributions and is aiming for one million by the filing deadline.

Sen. Kamala Harris of California brought in $1.5 million in her first day as a White House contender. Sen. Amy Klobuchar of Minnesota, Gov Jay Inslee of Washington State and former Colorado Gov. John Hickenlooper each raised $1 million in the 24 hours after launching their campaigns.

And South Bend, Indiana Mayor Pete Buttigieg’s campaign told Fox News they hauled in more than $600,000 in the 24 hours after appearing in a CNN town hall earlier this month, and raised more than $1 million through two ensuing fundraising pledges.

And some of the candidates jumped into the race with money already in the bank – thanks to pre-existing accounts from their Senate campaigns. Among them are Sens. Elizabeth Warren of Massachusetts with $12.5 million, Gillibrand $10.5 million, Sanders $8.8 million, Klobuchar $4.4 million and Cory Booker of New Jersey with $4.1 million.

But that’s just an appetizer.

“Could there be surprises, for sure,” Ferguson spotlighted.

While the topline figures are important, he said cash on hand is equally significant.

“The easiest thing for a candidate is to raise a lot. The question is how many of them are actually building a war chest so that they can compete for a campaign that still has a year to go until the nomination,” Ferguson explained.  “I think people often get too excited with the top line money raised and don’t look at what it took to raise that money. And the real question to me is who’s got money in the bank so that they can compete for the long haul.”

And pointing to the new emphasis on small-dollar online donations, he spotlighted that “in the past what you needed was money in the bank. Now you need money in the bank and grassroots fuel in the tank.”

The fundraising figures may also help the Republicans.