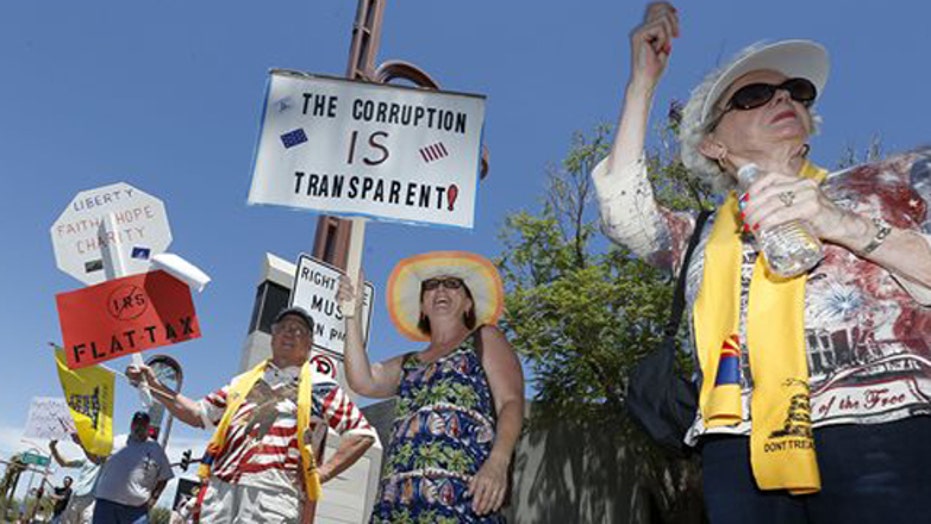 American Center for Law and Justice file lawsuit on behalf of 25 Tea Party and conservative organizations against the attorney general, treasury secretary, and Internal Revenue Service for alleged political profiling

WASHINGTON – A Washington advocacy group filed a lawsuit on Wednesday against the IRS and top Obama administration officials on behalf of 25 Tea Party-related groups, marking the biggest lawsuit to date over the tax agency's practice of targeting conservatives for additional scrutiny.

The 29-page lawsuit named Attorney General Eric Holder, Treasury Secretary Jack Lew and several IRS officials -- including Lois Lerner, the division director who refused to testify before Congress last week. The suit claims the constitutional rights of 25 Tea Party and other conservative groups were violated when tax workers singled them out for a drawn-out vetting process.

The American Center for Law and Justice is arguing that the Obama administration overstepped its authority and violated the First and Fifth Amendments of the U.S. Constitution, the Administrative Procedure Act as well as the IRS' own rules and regulations.

"The whole timeline and the whole narrative that the White House has put forth does not hold up to the truth," ACLJ Chief Counsel Jay Sekulow told Fox News on Wednesday.

In its suit, the ACLJ wants the government to admit wrongdoing. The suit also seeks to protect the groups from future IRS retaliation as well as compensatory and punitive monetary damages.

"The IRS and the federal government are not going to get away with this unlawful targeting of conservative groups," Sekulow said later in a statement announcing the lawsuit. "As this unconstitutional scheme continues even today, the only way to stop this flagrant and arrogant abuse of our clients' rights is to file a federal lawsuit, which we have done."

Sekulow says the suit is intended to "send a very powerful message to the IRS and the Obama administration."

Emails to the White House and IRS for comment were not immediately returned. Administration officials have said that while the additional scrutiny was inappropriate it was not partisan and therefore no laws were broken.

Allegations that the IRS had been targeting conservative groups that applied for tax-exempt status date back years but a government watchdog report released this month backed up the claims.

The White House has spent most of the last two weeks trying to contain the fallout from the scandal. Multiple congressional panels are currently investigating the allegations. The Justice Department has also launched its own investigation into whether the IRS broke the rules.

By last Friday, two of the agency's top tax officials had been ousted from the agency. One was outgoing acting IRS commissioner Steven Miller, who was named in the suit. Another official, Lerner, the director of the division that singled out the conservative groups, was placed on leave -- apparently after she refused to resign. She, too, was named in the suit.

On May 20, the NorCal Tea Party Patriots filed the first federal suit against the national tax agency. The suit, filed in the U.S. District Court of Cincinnati, seeks group status for "all conservative and libertarian groups targeted for additional scrutiny" between March 2010 and May 2013. It's also seeking unspecified monetary damages for the alleged violation of its constitutional rights and the costs associated with trying to comply with IRS demands.

The lawsuit is being backed by Citizens for Self-Governance, a group launched by Tea Party Patriots co-founder Mark Meckler.

Meckler claims that IRS agents demanded massive amounts of disclosure of information not authorized by the Internal Revenue Code or any other federal law. The suit alleges that the tactic was used to delay or dissuade conservative groups from going through with their applications.
The IRS acknowledged that employees at its Cincinnati office had targeted conservative groups, creating massive amounts of paperwork or rejecting applications altogether.

On May 21, Texas-based True the Vote, filed its own suit against the IRS and is demanding the government admit its mistake, grant the group tax-exempt status and pay for thousands of dollars in damages the group says it suffered.