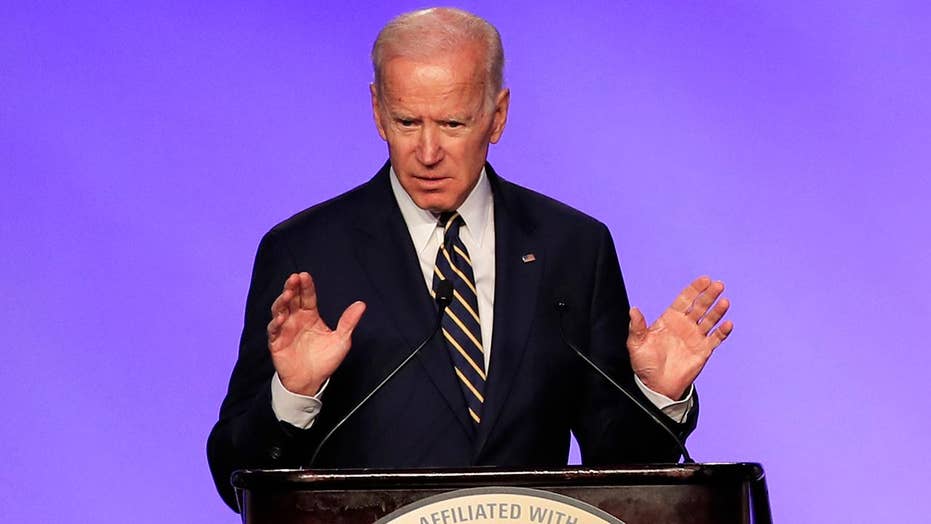 “And now look, you've got Joe Biden going up in his speech joking about it, just dismissing the nature of behavior, that if it was done in a workplace would have serious repercussions,” Bruce said on Fox News' “Hannity.”

BIDEN TEAM CHARGES AHEAD WITH PLANS FOR 2020

“This is about ... the sense of women's ability to be taken seriously, to not be touched without being asked, if at all, in the workplace.”

“This is about ... the sense of women's ability to be taken seriously, to not be touched without being asked, if at all, in the workplace.”

Biden appeared to make light of the controversy during his first public appearance since a group of women said he made them feel uncomfortable. His remarks came Friday at a speech delivered to members of the International Brotherhood of Electrical Workers (IBEW) in Washington.

Biden was introduced onstage by the IBEW's male president, Lonnie Stephenson, whom he embraced.

“I just want you to know I had permission to hug Lonnie,” Biden joked.

Bruce went after Democratic leaders for not being more critical of Biden and asked that “grassroots Democrats and independents” see that their lives have become better not because of the Democratic Party but because of President Trump and conservative policies.

“I would encourage all independents and Democrats, it's not about changing your point of view or where you stand on the issues. Realize that the people who've asked you to vote for them have been frauds for a very long time.