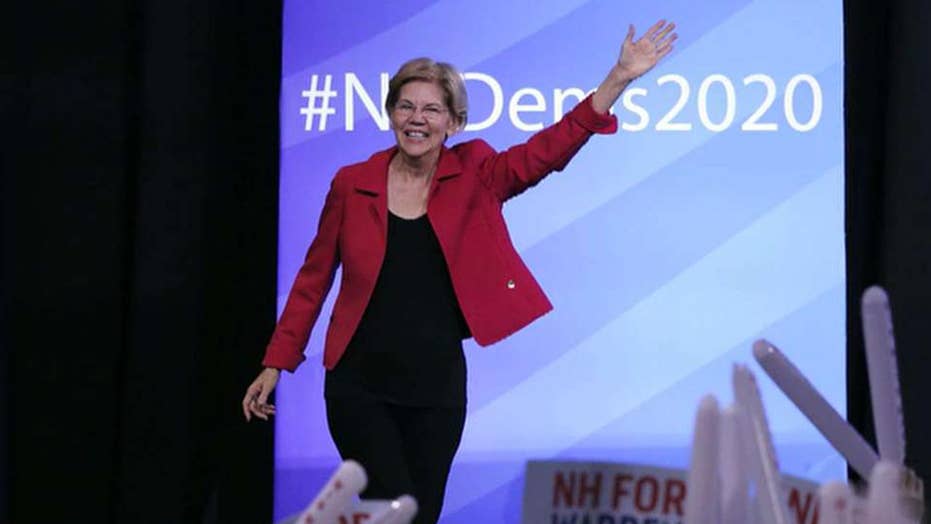 Saying that it’s “time to close and padlock the revolving door between government and industry,” Democratic presidential candidate Sen. Elizabeth Warren on Monday unveiled a wide-ranging and detailed plan to crack down on corruption in government.

The need for stricter ethics laws has long been a central theme of the Massachusetts Democrat’s White House bid, and Warren has repeatedly said it would be her first legislative priority if she wins the presidential election.

In announcing her plan, Warren called it “the most sweeping set of anti-corruption reforms since Watergate.”

The senator has emphasized on the campaign trail that she blames the entrenched culture of lobbying in the nation’s capital and the flood of big money into politics for grinding to a halt any potential progress to pass legislation on such top issues as gun violence, climate change and out-of-control health care costs.

Among other things, her set of proposals would ban federal lawmakers and the top congressional staffers from serving on corporate boards and would mandate that every new member of Congress make public any potential financial conflicts before taking office.

The plan also calls for corporate lobbyists to wait six years before being able to take federal government jobs. And it would permanently prevent the president, vice president, cabinet officials, and federal judges from working as lobbyists after leaving office or the bench.

To "end lobbying as we know it," Warren would broaden the definition of lobbying and would ban them from working on behalf of foreign governments. And domestically she would prevent them from making political contributions, acting as "bundlers" – where they pool donations from multiple people – and hosting fundraisers for candidates.

In introducing her plan, Warren highlighted the deterioration of public confidence in government.

“In 2019, just 17% of Americans trusted government to do the right thing. Why? Because our government works great for the wealthy and well-connected, but not for everyone else. That’s corruption, plain and simple—and I’ve got a plan to fight back,” she tweeted.

As she’s done in the past, Warren specifically took aim at President Trump and his administration, saying “make no mistake about it: The Trump Administration is the most corrupt administration of our lifetimes.”

Warren proposed creating a new U.S. Office of Public Integrity – which would investigate ethics complaints from the public and impose penalties on violators or refer “egregious violations to the Department of Justice for criminal prosecution.”

Warren unwrapped her anti-corruption proposals hours ahead of a rally and speech Monday evening at New York City’s Washington Square Park – which is close to the site of the infamous 1911 Triangle Shirtwaist Factory fire. The industrial disaster, in which nearly 150 people were killed, led to the passage of groundbreaking workplace safety regulations.

Monday’s speech will likely touch on many of the same themes the populist senator spotlighted during her formal campaign kickoff in February in front of historic textile mill buildings in the working-class city of Lawrence, Mass., that were the site of a famous labor strike in 1912.

The Warren campaign confirmed that the candidate will use a teleprompter for her Monday evening speech, which she rarely uses on the campaign trail.