California Democratic Rep. Eric Swalwell and Colorado Republican freshman Rep. Lauren Boebert have been feuding on Twitter this week after Boebert backed a GOP effort to reject electors from Arizona and Pennsylvania.

Boebert recently came under fire for tweeting, "Today is 1776," before the Jan. 6 pro-Trump rally that turned into a violent riot where five died, and for informing her followers that House Speaker Nancy Pelosi had left the House chamber on Wednesday when a mob stormed the Capitol as lawmakers were counting electoral votes.

"In the past 5 days, the left has shown us what vile hypocrites they truly are," Boebert tweeted Sunday. "They are driven by hate, projection and endless conspiracy theories."

Some conservatives and Republicans have argued that left-leaning politicians and pundits were more accepting of violent Black Lives Matter riots – amid more peaceful BLM protests – that took place in major U.S. cities over the summer and led to the destruction of local businesses than they were of the Capitol riot.

GOP CONGRESSWOMAN DEFENDS RIGHT TO CARRY A GUN IN DC: 'I AM MY OWN SECURITY'

Some national and global leaders have called the Capitol riot a historic attack on U.S. democracy.

Swalwell responded to the tweet saying Boebert "has the right to remain silent" just "like any citizen who has committed a crime."

"I suggest that she use it," Swalwell tweeted. 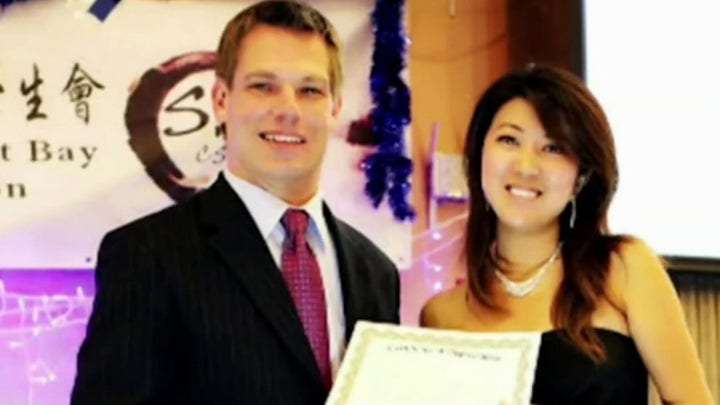 One of her highest-profile targets was Swalwell, whom she met when he was still a city councilman in the East Bay city of Dublin almost a decade ago.

Swalwell is not accused of any wrongdoing, and after the FBI gave him a defensive briefing about Fang’s suspected activities in 2015, he cut her off. Fang is not suspected of accessing classified information.