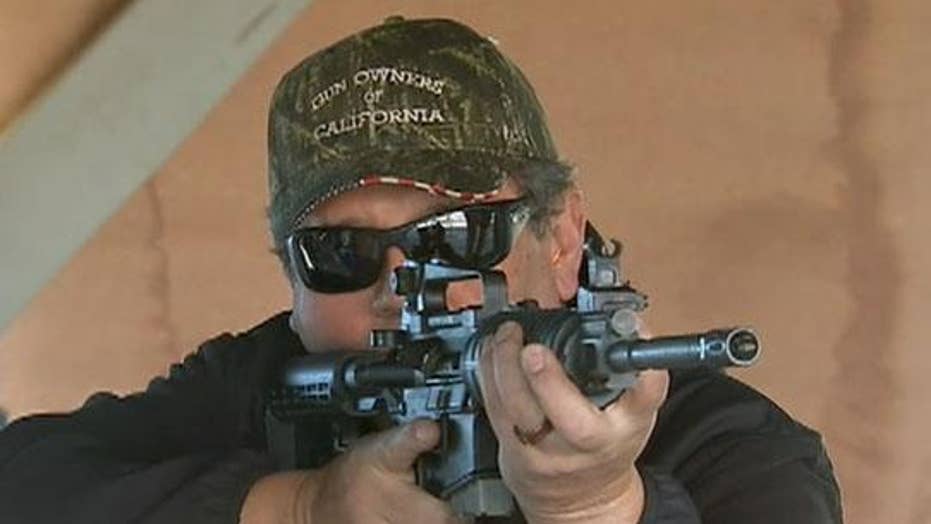 The Supreme Court took up its first major gun control case in nearly a decade on Monday, hearing arguments in a dispute between a gun advocacy group and New York over a statute that restricted the transportation of firearms outside city limits -- even when licensed, locked and unloaded.

The city's statute was later amended but the court heard arguments over the original measure anyway, in a case that could have ramifications for local gun laws. The fact the high court even considered the case -- New York State Rifle & Pistol Association v. City of New York -- prompted a stunning complaint earlier this year from Democratic senators, who filed a brief essentially threatening to pack the court absent changes.

The warning underscored what could be at stake in Monday's case.

The Supreme Court has not issued a significant gun rights decision since 2008’s District of Columbia v. Heller. Since then the court applied Heller – which recognized the right to possess a firearm for purposes such as home protection – to states via the 14th Amendment in 2010’s McDonald v. City of Chicago. A 2016 ruling in Caetano v. Massachusetts, which dealt with a state ban on stun guns, did not focus on traditional firearms but acknowledged that the Second Amendment extends to other weapons as well.

It's unclear whether the case before the court on Monday could join the list of landmark Second Amendment cases.

The law in question said city residents could apply for a "premises" license to keep a firearm in their home, but they had to keep the weapons at home. Licensees were permitted to take their guns to one of the seven authorized city shooting ranges if kept in a locked container. The New York State Rifle & Pistol Association fought the law, claiming it was unconstitutional to keep people from bringing their weapons to second homes or ranges outside of the city.

While the court agreed to hear the case, New York City amended the regulation following a change in state law, removing prohibitions against transporting locked, unloaded, licensed firearms to homes, shooting ranges, or competitions outside the city. The city and its supporters claimed that the change ultimately makes the case moot.

"The Petitioners have gotten the relief that they sought," Ginsburg noted during Monday's arguments. Sotomayor told plaintiff's attorney Paul Clement that this was "a case in which the other side has thrown in the towel and completely [given] you every single thing you demanded in your complaint for relief..."

Clement argued this was not the case, and that the new law is still unclear because while it permits "continuous and uninterrupted" transportation of firearms on their way out of New York City, it does not address what would happen if a gun owner, for instance, takes a coffee or bathroom break along the way.

Sotomayor noted this is an issue with the new law, not the old one at the center of this case. The new law has yet to be reviewed by lower courts. Justice Stephen Breyer also said he believes that people who stop for coffee while transporting guns would not be prosecuted.

Conservative Justice Neil Gorsuch, however, pointed out that stopping for coffee while transporting a gun would still have been a problem under the old law, so this issue should be relevant in the current case. The attorney for the city, meanwhile, argued that such breaks "are entirely permissible," as the "continuous and uninterrupted" language is absent from the state's law, which is controlling.

Deputy Solicitor General Jeffrey Wall, however, argued that the plaintiffs could be awarded damages for economic harm suffered while the old restrictions were in place. Ginsburg noted that this could have been a lifeline for the plaintiffs' case, except they never requested damages.

"They've had every opportunity to say that they want damages, including today," Kagan pointed out, "and for whatever reason, Mr. Clement has, you know, basically said this case is not about damages."

What the New York State Rifle & Pistol Association really wants is for the court to issue a ruling on the constitutionality of the old law, which could impact future legislation.

Clement claimed that a ruling was necessary to send a message regarding the unconstitutionality of limiting the transportation of firearms, which could prevent future prohibitions from going forward.

It was to the backdrop of this case that Democratic senators issued their warning earlier this year.

"The Supreme Court is not well. And the people know it," said the brief, filed in August by Sens. Sheldon Whitehouse, D-R.I., Richard Blumenthal, D-Conn., Mazie Hirono, D-Hawaii, Richard Durbin, D-Ill., and Kirsten Gillibrand, D-N.Y. "Perhaps the Court can heal itself before the public demands it be 'restructured in order to reduce the influence of politics.'"

That brief drew criticism from Sen. Lindsey Graham, R-S.C., and others.

“When you hear Democrats talking about expanding the Supreme Court….....they are talking about making the Court more liberal,” Graham tweeted at the time.

Harvard Law Professor Laurence Tribe, a well-known liberal voice and fierce critic of the Trump administration, also came out against the Democrats on this issue, calling their brief “inappropriately --- and stupidly --- threatening.”