The California senator stands at 5 percent support in Iowa in a survey commissioned by the progressive organization Focus on Rural America. That’s down 13 percentage points from her 18 percent support in the group’s previous poll, which was conducted in July.

The Iowa survey’s release came a day after an NBC News/Wall Street Journal national poll has Harris in fifth place at 5 percent. That’s down 8 points from her 13 percent showing in the July poll.

Harris saw her numbers soar in most national and early voting state polling in the weeks after her viral takedown of former Vice President Joe Biden in the first round of Democratic presidential primary debates in late June.

Still, there are still four and a half months to go until the Iowa caucuses kick off the presidential nominating calendar. And the race for the Democratic nomination remains very fluid. 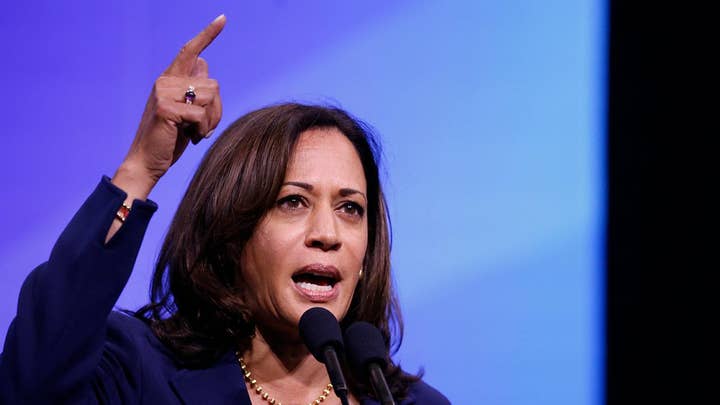 The new Focus on Rural America poll – taken following last Thursday’s third round debate and released Wednesday – was conducted by David Binder, who serves as the Harris campaign’s chief pollster.

In the survey, Biden – the front-runner in the race -- stands at 25 percent support among likely Democratic caucus-goers in Iowa, with populist Sen. Elizabeth Warren of Massachusetts at 23 percent.

South Bend, Indiana Mayor Pete Buttigieg is in third place in the survey at 12 percent. Sen. Bernie Sanders of Vermont – the progressive independent from Vermont who’s making his second straight presidential run -- stands at 9 percent, with Sen. Amy Klobuchar from Minnesota – Iowa’s neighbor to the north – at 8 percent.

Billionaire environmental and progressive advocate Tom Steyer is at 3 percent, with Sen. Cory Booker of New Jersey and tech entrepreneur Andrew Yang at 2 percent. Everyone else tested in the

poll registers at 1 percent or less.

Harris has been beefing up her presence in Iowa, the first state to vote in the primaries and caucuses. The former California attorney general recently traveled through the state on a bus tour and she was the first Democratic White House hopeful to go up with ads.

Biden – who has increased his visits to Iowa and built up his team on the ground this summer – enjoyed an 8 point jump since the July survey. Warren, who has had a strong staff on the ground in Iowa since earlier this year, experienced a slight 3 point drop from the previous poll.

The Focus on Rural America survey was conducted Sept. 14-17, with 500 likely Democratic presidential caucus-goers in Iowa questioned by live telephone operators. The survey’s sampling error is plus or minus 4.4 percentage points.