Scalise on the State of the Union: Democrats only stood up and cheered when it was their personal successes

Louisiana Republican Rep. Steve Scalise says Democrats did not stand up and cheer for the successes for everyday Americans during President Trump’s State of the Union address.

Democrats on the House Judiciary Committee held a hearing Wednesday on new gun control legislation Democrats plan to push on the American people. The top Republican on the committee, Doug Collins, R-Ga., asked committee Democrats if I could testify about this legislation in an appropriate setting to offer another perspective as both a survivor of a shooting attack and strong supporter of our Second Amendment rights. But the Democrats said no. While liberals may try to silence conservative voices, I will not be silenced. The American people deserve to hear all perspectives. Here is the testimony I planned to give:

Statement for the Record

House Committee on the Judiciary

My name is Steve Scalise. I am the Congressman for Louisiana’s 1st District. I am the Republican Whip. I am also a target of gun violence.

Many of you may be familiar with the events of June 14, 2017. Around 7:00 AM, at the last morning practice before the annual Congressional Baseball Game for Charity, an Illinois man named James Hodgkinson opened fire on myself and a group of Republican legislators and volunteers on an Alexandria, Va. baseball field.

REP. STEVE SCALISE: ‘PLEASE GOD, LET ME SEE MY FAMILY AGAIN’ – WHAT WENT THROUGH MY MIND THE DAY I WAS SHOT

Fortunately, as a member of House leadership, I was accompanied by my Capitol Police security detail who were able to return fire and engage the shooter until additional law enforcement officers arrived and ultimately took down the shooter. I was shot and nearly fatally wounded, and both of my detail agents were shot as well. I am alive today thanks to the bravery of U.S. Capitol Police and the Alexandria Police, heroes like Congressman Brad Wenstrup and the first responders who rushed to the scene, the incredible medical team at Washington MedStar Hospital Center, and most importantly the grace of God.

I applaud the intentions behind this hearing and believe we are all pursuing the same goal of reducing gun violence. As someone who experienced gun violence, I do not want anyone else to go through that trauma. However, it is also important to me that we be honest with ourselves and the American people about what will -- or won’t -- actually prevent these tragedies. The shooter who targeted me that morning was armed with an SKS rifle and a 9mm Smith & Wesson handgun, both of which were purchased in compliance with Illinois gun laws. 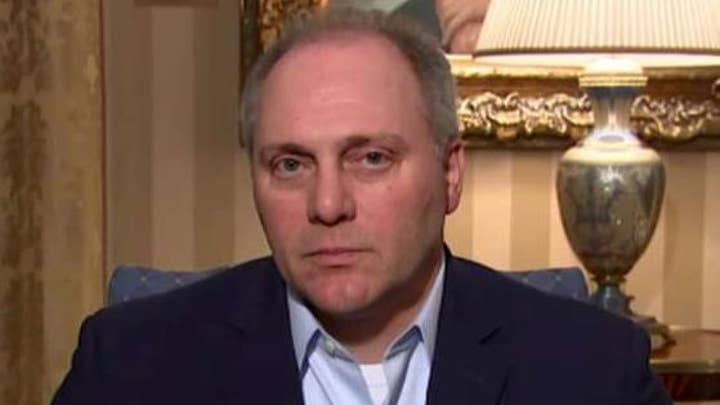 The new gun control restrictions currently being considered by the Democratic majority in H.R. 8 would not have prevented my shooting.

In fact, these new gun control measures being proposed in H.R. 8 would not have prevented any number of recent mass violence events. Several perpetrators of recent multi-victim shootings also purchased their guns legally. In some instances, the background check system failed, and lack of intervention from law enforcement failed to intercept potential threats.

I want to stress that the man who shot me was issued a permit to purchase firearms by the state of Illinois, and had acquired them legally. At Virginia Tech, Charleston, and Sutherland Springs failures in the background check system allowed individuals to illegally obtain the firearms they used to commit their crimes. The alleged loopholes that H.R. 8 claims to fix would not have prevented these tragedies either.

Instead, whether intentionally or not, the gun control proposals in H.R. 8 could turn law abiding citizens into criminals while also failing to achieve the stated purpose of reducing gun violence.

A recent study by the Violence Prevention Research Program at UC Davis and Johns Hopkins University into California’s effort to implement “comprehensive background checks” found that, “The simultaneous implementation of [the Comprehensive Background Check policy] and [prohibitions on firearm purchase and possession for persons convicted within the past 10 years of certain violent crimes classified as misdemeanors] was not associated with a net change in the firearm homicide rate over the ensuing 10 years in California.” Even though California implemented more stringent background checks, this study shows that these measures did not reduce gun violence.

In fact, most criminals obtain firearms through unlawful means -- whether through theft, straw purchases, or lying on the required paperwork. A DOJ study of federal inmates found that only seven percent who possessed a firearm while committing the crime they were serving time for purchased it legally from a firearms dealer under their own name. Based on similar gun control measures in states like California, H.R. 8 would not deter a criminal from engaging in criminal activity, and it won’t decrease gun crime. Instead, it only succeeds in limiting the ways that law-abiding citizens could exercise their Second Amendment rights.

Every single month in America, law-abiding citizens with concealed carry permits defend themselves and others against criminals who have guns. For example, on January 8th, a man approached a 25-year-old woman in Chicago, displayed a weapon, and attempted to rob her at a bus stop. The woman had a concealed carry permit. She drew her own weapon and fired a shot, killing the armed robber. The owner of a nearby pharmacy said such violence happens “all over” Chicago. However, in this case, the intended victim was able to defend herself with her own gun.

On January 2nd, a Good Samaritan in California with a concealed carry permit used his firearm to stop an attempted stabbing of a security guard and held the perpetrator until law enforcement could arrive at the scene.

On January 17th, a man at an IHOP in Alabama opened fire on employees, killing one before another employee pulled his handgun and killed the shooter in self-defense.

On January 29th, an armed robber held up a Family Dollar Store in Georgia. A customer was able to use a personal firearm to shoot and kill the robber before the criminal could hurt any of the many employees or customers in the store.

These are just some examples from the last month alone. There are hundreds of stories like these every single year from law-abiding Americans all over the country.

I am alive due to the effective and immediate response of my Capitol Police detail, and the Alexandria Police Department. Most victims of gun violence do not have law enforcement already on the scene to respond to a violent gunman. Instead of making it harder for citizens to defend themselves until law enforcement arrives, Congress should consider legislation like H.R. 38, the Concealed Carry Reciprocity Act, a bill that would help law-abiding citizens have the same tools to defend themselves as a criminal has of trying to inflict harm, regardless of where they travel.

I firmly believe we must never forget, nor minimize, the importance of the Second Amendment to our Constitution.

H.R. 8, as well as other new gun control legislation currently being considered by the House Democrat majority do not accomplish the goal of reducing gun violence.

If our goal is to reduce gun violence, then we should focus on penalizing criminals, not law-abiding citizens.