Steve Moore: Media put all of this dirt on me that had nothing to do with my Fed qualifications

Stephen Moore, who recently withdrew himself from consideration as President Trump’s pick for the Federal Reserve Board, said on Thursday he was doomed as a candidate from the beginning because of his conservative leaning views on the economy.

Moore, appearing on Fox News’ Tucker Carlson Tonight, said that he was the subject of personal attacks by left because of his views on economic policy, which he said was never the subject of debate during his consideration.

“The left understood from the first couple of days, because they did surveys of the senators and the Republicans senators loved my economic views and so on, and that’s when they launched this character assassination,” he said speaking to host Tucker Carlson.

TRUMP’S PICK FOR FED BOARD SAYS HE REGRETS JOKE ABOUT OBAMAS: ‘I SHOULDN’T HAVE SAID IT

“The most amazing thing, The Washington Post, The New York Times, CNN, they got my divorce settlement from 10 years ago unsealed so that they could just put all of this dirt on me that had nothing to do with my qualifications to be on the fed.”

Moore came under intense scrutiny last week for his past writings that appeared to disparage women and offensive remarks about the Obamas but on Thursday he seemed to accept responsibility for what he called “stupidity.” 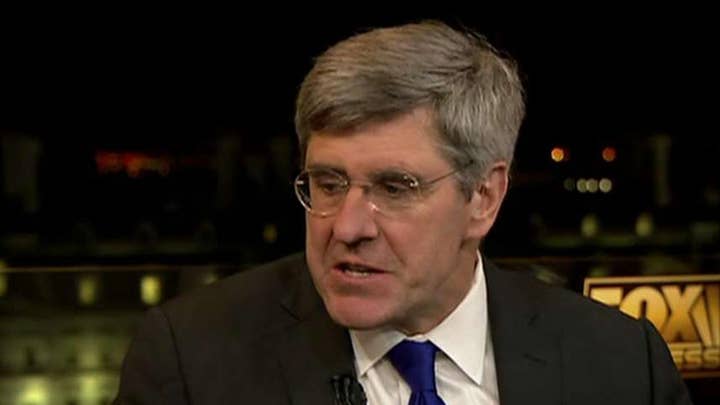 “I’m not playing the victim here because the truth is I have said a lot. I have a two mile long paper trail, I’ve given 500 speeches and written a lot of article and i've said things are impolitic.”

“Some of things I’ve said are stupid, I wish there were a statute of limitations on stupidity because some of these things were 20 - 25 years old.”

Moore also took aim at his former employer CNN for their coverage.

“Well this is a little awkward for CNN because every night they trash me now when for the last two and a half years I’ve been their senior economics writer and the things they’re talking about now are things that happened 20 years ago. What a minute, if I’m such a scoundral and sextist, why did they have me on every night?”

Moore said he was excited about the prospect of working with Trump but now feels “bummed out.”

“I hate quitting. I’m not a quitter, so I’m sad about that.