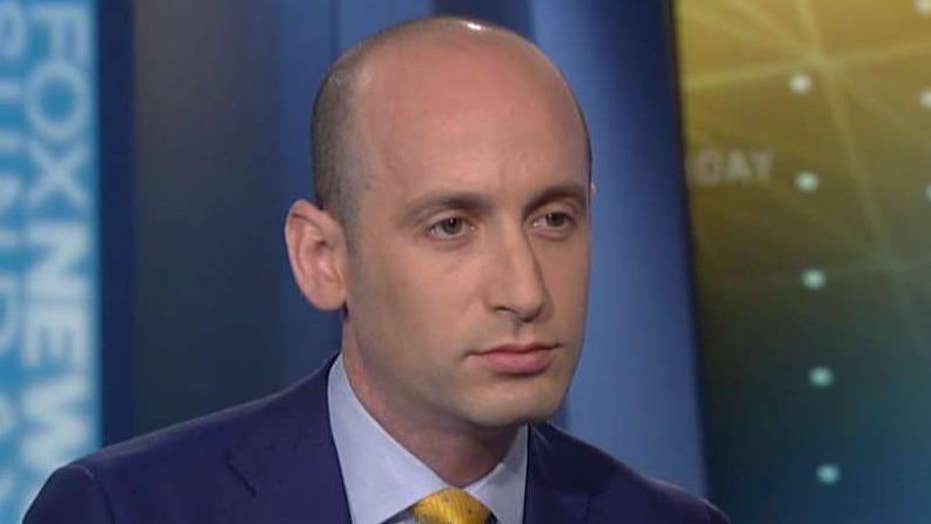 Stephen Miller on President Trump vs. the 'Squad'

Trump administration senior policy adviser Stephen Miller is denying that President Trump has played the race card in his recent attack against four minority congresswomen, and says that the group known as the “Squad” has said much worse.

Miller recalled comments from Reps. Ilhan Omar, D-Minn., and Ayanna Pressley, D-Mass., but said that Alexandria Ocasio-Cortez, D-N.Y., was "perhaps the most shocking of all" when she described detention centers at the southern border as “concentration camps.” He noted that this was personally offensive to him.

“I’m a Jew. As a Jew, as an American Jew, I am profoundly outraged by the comments of Ocasio-Cortez”,” Miller told “Fox News Sunday” host Chris Wallace, saying Ocasio-Cortez “minimizes the death of 6 million of my Jewish brothers and sisters," and "paints every patriotic law enforcement officer as a war criminal."

Miller brought this up in response to questions about whether some of Trump's past remarks should be viewed as racist, not just recent words directed toward Ocasio-Cortez and other freshman congresswomen, but the birtherism claims about President Obama, comments about Mexico sending criminals across the border, and then-candidate Trump's proposal for a Muslim ban. Miller disagreed with claims that Trump is racist, and said that Democrats use it as a tactic to discredit those who disagree with them.

"I fundamentally disagree with the view that if you criticize somebody, and they happen to be a different color skin, that that makes it a racial criticism," Miller said. "If you want to have a colorblind society, that means you can criticize immigration policy, you can criticize people's views, you can ask questions about where they're born, and not have it be seen as racial."

Wallace asked if this also means you can say, "Go back where you came from."

Miller shifted from that reference to President Trump's tweet that drew bipartisan backlash, to the "send her back" chant by those in attendance at a North Carolina rally.

"The president was clear that he disagreed with it," Miller said about the chant. Wallace pointed out that this was after the fact, and that Trump let the chant go on for 13 seconds.

The discussion later shifted to Trump's claims that the "Squad" hates America. Wallace played clips of Trump himself criticizing America in the past, including -- as president -- saying,  "We got a lot of killers, what you think our country's so innocent?" in comparison to Russia.

"Why is what those congresswomen have said in general any worse than what you just heard Donald Trump say?" Wallace asked.

Miller said it's about the underlying sentiment about the country and the direction the speakers want it to take.

"Anybody who's running for office -- right, left, or center -- always points out where they think America can do better, where they think America needs to go. But there's a fundamental distinction between people who think we need to lean into and strengthen America's core values, whether it be our constitutional values, the rule of law, the principles of Western civilization, or people who think we basically think we need to turn America into Venezuela."

Wallace said calling President Barack Obama "ignorant" or comparing America to Putin's Russia has nothing to do with the Constitution.

Miller reiterated his point that Trump and the "Squad" have ideological differences, with Trump's philosophy being "America First."