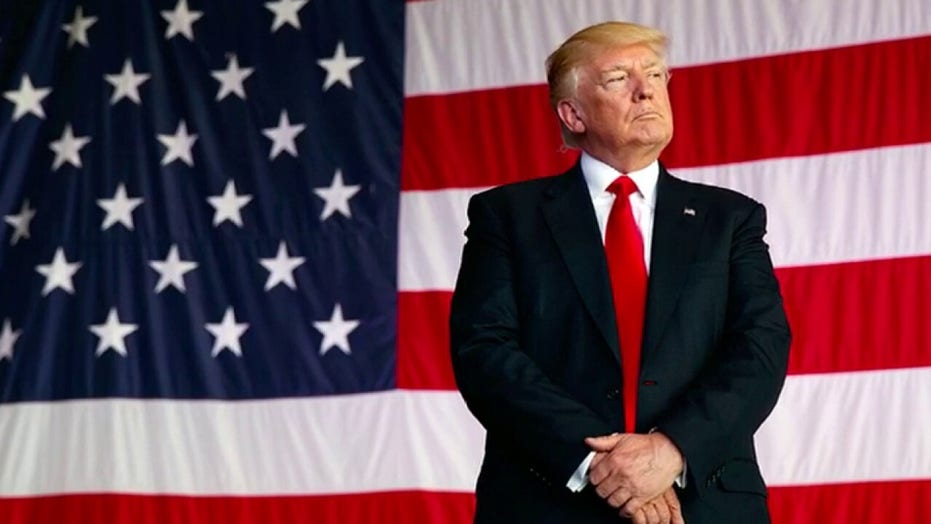 Trump to highlight economic achievements in State of the Union

Some notable guests will be in the House chamber for President Trump's State of the Union Address Tuesday night -- including two anti-Beijing activists hosted by Republican senators that underscore the tension within the Republican party on how to address China.

Lawmakers and other officials traditionally are allowed to invite one or more guests to view the president's annual speech to a joint session of Congress. Lawmakers often choose their guests to make political statements, highlight a policy accomplishment or reward an exceptional constituent from their districts.

Here are some of the guests that members of Congress are bringing to the Capitol for Trump's address Tuesday night.

FILE PHOTO: Workers walk by the perimeter fence of what is officially known as a vocational skills education centre in Dabancheng in Xinjiang Uighur Autonomous Region, China September 4, 2018. This centre, situated between regional capital Urumqi and tourist spot Turpan, is among the largest known ones, and was still undergoing extensive construction and expansion at the time the photo was taken. Picture taken September 4, 2018. REUTERS/Thomas Peter/File Photo

Abbas, one of Rubio's two guests, founded the organization "Campaign for Uighurs," which raises awareness of the Chinese government's atrocities against Uighur Muslims.

U.S. government officials believe that China has placed anywhere from 800,000 to 2 million Turkic Uighurs in reeducation camps under harsh conditions.

Outside the camps, the 11 million Uighurs living in Xinjiang live under constant surveillance and discrimination from the Chinese government. They watch as the Chinese bulldoze through their mosques and, in some cases, their communities.

As a result of her work, her sister, Dr. Gulshan Abbas, was believed to have been forcibly disappeared and detained in a camp in Xinjiang.

"Rushan is a leading voice in the defense of Uighurs’ human rights," Rubio said of his guest. "As a result of her work, her sister, Dr. Gulshan Abbas, was believed to have been forcibly disappeared and detained in a camp in Xinjiang. As the Founder and Executive Director of Campaign for Uighurs, Rushan has tirelessly raised awareness of the atrocities taking place in Xinjiang at the hands of the Chinese Communist Party."

Law was elected as a Hong Kong lawmaker at 23 years old before being forced out by the Beijing government. He is now a Yale graduate student and the founding chair of Demosisto, a "movement-oriented youth activist group in Hong Kong that promoted democracy and progressive values."

"Nathan is an inspiration in the fight for freedom and democracy, and he has sent a powerful message to Communist China that the people of Hong Kong will not back down or be silenced," Scott said. "The United States will always stand with fighters like Nathan to rise up against injustice and fight for freedom. We cannot let Communist China and General Secretary Xi continue to silence the people of Hong Kong, and the world must stand together to present a unified front against Communist China’s aggression."

Scott and Rubio's guests could be seen as a subtle dig against Trump, who has been reluctant to call out the Chinese government on human rights issues as he tries to hammer out a trade deal with the nation. They are hardly the first Republicans to urge a tougher stance on China than the president.

Last October, as Trump was congratulating China on its 70th anniversary, Sen. Tom Cotton, R-Ark., Rep. Liz Cheney, R-Wyo., and Rep. Mike Gallagher, R-Wis., along with several other Republicans, ripped the communist nation for having "deprived its citizens of their fundamental human rights and human dignity," as Cheney and Gallagher put it in a statement.

After her husband John McNamara was one of five journalists for the Capital Gazette, a newspaper based in Annapolis, Md., to be killed in a mass shooting in 2018, Chamblee became a gun control activist.

"This is Gun Violence Survivors Week," Chamblee said, according to a press release from Van Hollen. "It's been 586 days since I watched the survivors of the Annapolis Capital emerge from the death trap that was their workplace, their newsroom. Because of an evil and dangerous man who never should have had easy access to a shotgun, my husband John McNamara was one of five colleagues who never made it out... I'm so grateful for Senator Van Hollen's tireless work to end this nightmare of gun violence."

"But since their murders, the Senate has yet to take meaningful action to address gun violence," he said. "From the daily toll of violence in our communities to the mass shootings we’ve seen across the country, it’s past time to act."

Mendoza's son Brandon was a sergeant in the Mesa Police Department before he was killed in a car crash with an illegal immigrant who was intoxicated. The individual who killed Mendoza had a criminal record in the U.S. and still had not been deported.

"Congress’s refusal to secure the border, consistently enforce our immigration laws, and remove incentives for aliens here illegally, has contributed to the deaths of innocent Americans," Biggs said in a statement. "These deaths were preventable, but for our government’s dereliction of duty."

Wild spent years fighting in court for Epstein victims against the lenient plea deal he received from prosecutors in his early-2000's case in Florida, and a bipartisan group in Congress rewarded her by putting her name on a victims' rights bill aimed at preventing a similar circumstance from happening in the future.

"Courtney’s bravery and dignity in the face of unfathomable treatment by those who should have been fighting for her and the other Epstein survivors, and the resulting miscarriage of justice in that case deserves and demands the nation’s attention," Speier said. "We are standing up for what is right and to ensure that those who continue to subvert the rule of law and those who fail to hold perpetrators responsible for their malign deeds will not succeed."

Cengiz was waiting outside of the Saudi consulate in Istanbul, Turkey for Khashoggi to get a divorce finalized so the pair could get married when he was killed by a Saudi hit squad inside the consulate. His murderers were on orders from Saudi Prince Mohammed bin Salman, according to an investigation by the CIA. President Trump has been reluctant to acknowledge that Saudi Arabia had a role in killing Khashoggi.

"Hatice’s courage to sit in the House Chamber Tuesday night should serve as a clarion call to the President that no matter how high it goes, Saudi Arabia must be held accountable for the murder of this loving father and fiance, respected journalist, U.S. resident, my constituent, and reformer,” Connolly said. “Congress has acted. Now too must the president.”