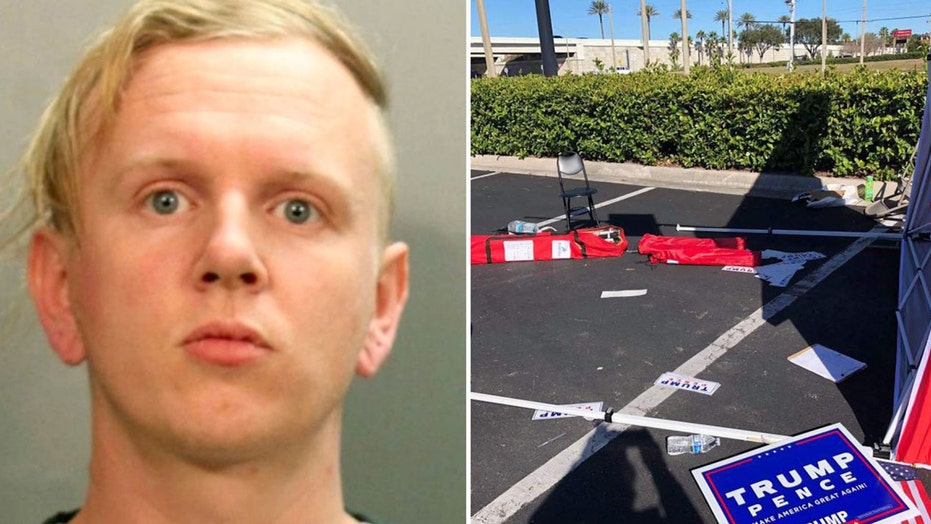 Dean Black, chairman of the Duval County Republican Party, says his heart dropped when he heard about the attack on a group of GOP volunteers by Gregory Timm. Black warns that if a line isn't drawn soon as to what is acceptable as political rhetoric and actions 'a day of reckoning' is coming soon.

A startling rash of threats and violent incidents targeting Republican voters in recent weeks is raising concerns about the increasingly toxic political climate, just as the 2020 presidential primaries are getting started.

The incidents began earlier this month when a Florida man, Gregory Timm, 27, allegedly rammed his van into a Republican Party voter registration tent. According to reports, Timm ran over chairs and tables, and witnesses said he recorded the scene moments after the incident, made an obscene gesture and sped off.

Timm has been charged with two counts of aggravated assault on a person 65 years old or older, one count of criminal mischief and driving with a suspended license. An arrest report said Timm told deputies he did not like President Trump and “someone had to take a stand.”

Days later, in Windham, N.H., amid the state’s first-in-the-nation primary last Tuesday, a man allegedly assaulted a 15-year-old Trump supporter and two adults who had been volunteering at a polling site, Fox News first reported.

The New Hampshire man, Patrick Bradley, 34, was charged with simple assault and disorderly conduct after allegedly getting in the face of the teenage boy, Nate Campbell, who was wearing a red “Make America Great Again” hat, and slapping him across the face. He also is said to have assaulted two other adults who attempted to intervene.

Police arrested Bradley days after the incident. He was also accused of throwing Trump campaign signs and attempting to knock over the Trump campaign tent set up at the Windham High School polling site.

Campbell's mother, Cathy Campbell, in an exclusive interview with Fox News last week, said "it's scary that you can't express which political party you are. People need to know how much intolerance there is right now."

"I was apprehensive about him wearing the MAGA hat, because we know it can provoke and we know people don’t like Trump,” she explained. “But he wore the hat because he’s a proud 15-year-old and he doesn’t know what people are going to be like.”

She added: "It sickens me that people would be angry at a kid for wearing a stupid hat."

The president’s eldest son, Donald Trump Jr., spoke out last week after the incident in New Hampshire, accusing the mainstream media of not calling out the violence against Trump supporters and Republicans.

“So a leftist attacks 3 Trump supporters, including a 15-year-old child, in NH this week,” Trump Jr. tweeted Thursday. “Last week a deranged leftist attempted to run over a group of Trump supporters with a car in FL. What will it take for the MSM to finally call out leftwing violence?”

Also, over the weekend, protesters at the University of California at Santa Cruz smashed a College Republicans information table.

According to reports, and a video posted on social media, two protesters tore up placards and ripped down signage—with one of them appearing to spit on a 13-star “Betsy Ross” American flag that is seen on the ground.

“I think this guy’s trying to assault me,” one protester is heard saying in the video, laughing, as someone tries to grab an American flag away from him. The man attempting to take back the flag later in the video falls to the ground during the struggle.

“Get a life!” those fighting off the protesters say at one point.

The video starts when the incident is already underway, so it’s not clear exactly how it began. But Dylan Temple, president of the College Republicans chapter at UC Santa Cruz, told The Post Millennial it began when one of the protesters grabbed one of the group’s flags.

Temple said he immediately reported the matter to campus police. Subsequent posts on social media gave a name for one of the protesters, but it was unclear if that person was charged with any crimes. 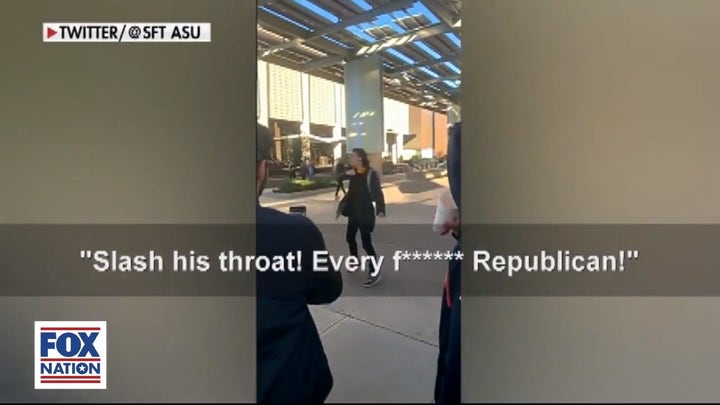 Meanwhile, police at Arizona State University said that they were investigating a video that showed an individual shouting violent threats at a group of pro-Trump students on campus. The video, posted by Students for Trump at Arizona State University on Feb. 5, shows an individual at ASU's Tempe campus repeatedly shouting at a group of conservative students, saying: "Slash Republicans' throats."

"At one point," Sprague said, "a female came up from behind me, spun me around, and punched me in the face and then grabbed my hat off my head and was just yelling, 'How dare you?'"

He told the station he believes the woman was wearing a ring or had a set of keys in her hands when she lunged at him because the wound was "pretty deep and it goes to the bone."

"People have different views, but we're not supposed to take it out on each other," Sprague said.

Meanwhile, last month a Florida man was sentenced to 90 days in jail and one year of supervised probation after slapping the bill of a man’s “Make America Great Again” hat before telling the man to “go back to Russia you f--- communist” and spitting on him, investigators said.