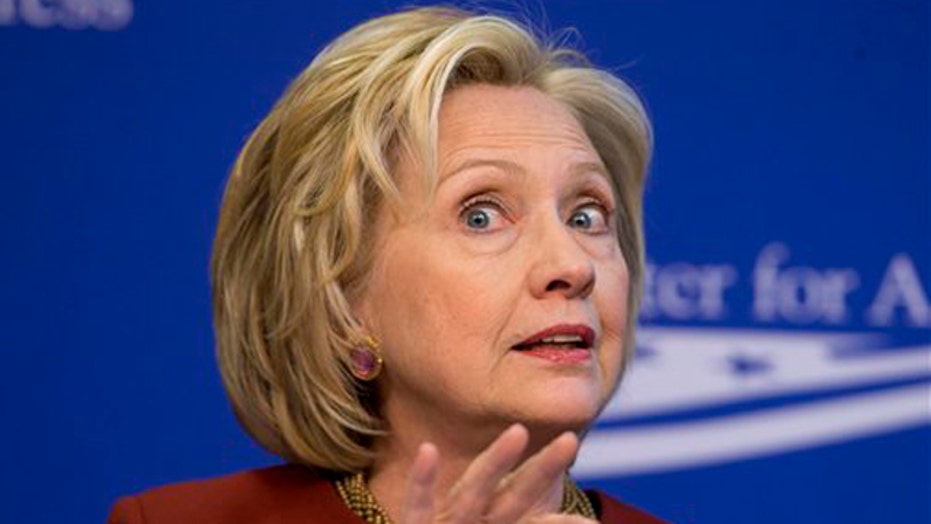 Will news media hold Hillary Clinton's feet to the fire?

Breaking down coverage of 2016 race

The sources said the former secretary of state is expected to first reveal her decision to voters via social media. The sources added that, as has been widely expected, Clinton will then head to key early voting states like Iowa and New Hampshire next week.

Clinton would be the first Democratic candidate to confirm a run for the White House, and she is considered the clear frontrunner to win the party’s nomination. If she were to win in 2016, she would be the first female U.S. president.

Sources say, in advance of her announcement, Clinton has been holed up in recent days behind closed doors in policy meetings. The meetings have covered a range of subjects, including national security as well as domestic topics like the economy.

Clinton would join the race after two Republicans -- Sens. Ted Cruz of Texas and Rand Paul of Kentucky -- already declared. Sen. Marco Rubio, R-Fla., also is expected to announce his plans next week. Despite not being an official candidate, Clinton has faced immense scrutiny from the media, and Republicans, over her use of personal email while secretary of state and her family foundation's acceptance of foreign donations. On Friday, Republican Party Chairman Reince Priebus said Clinton "has left a trail of secrecy, scandal and failed liberal policies that no image consultant can erase."

The specific timing of Clinton's announcement is unclear, though one source told The Guardian she will declare her candidacy through Twitter at noon Sunday. The tweet reportedly would be followed by a video and email announcement, and then a series of conference calls announcing her tour, which starts in Iowa.

On Friday, two Democrats who are weighing whether to challenge Clinton also appeared to needle her looming candidacy.

"I think history is full of examples where the inevitable front-runners are inevitable right up until they are no longer inevitable," former Maryland Gov. Martin O'Malley told Fox News. "What I've heard all around the country is that people want new leaders, they want to hear the voices of new leaders and they want to start a robust debate about the issues our country faces."

Former Democratic Virginia Sen. Jim Webb also told Fox News "people are looking for leadership that they can trust" and leaders who say what they believe "rather than massaging issues to try to get to ... one political safety zone or another, who will really take the risk of leadership."

Asked whether Clinton has done that in her career, Webb said: "You'll have to ask her."

On Monday, Clinton’s political team – from senior advisers to state operatives – was put on alert for a presidential campaign announcement.

A Democratic official earlier told Fox News that Clinton’s approach in next year’s election will illustrate that as a presidential candidate “she fights for every vote and takes nothing for granted". This would be in sharp contrast to her failed 2008 run, when she was considered the inevitable Democratic presidential nominee but failed to see the burgeoning rival campaign of now-President Obama.

The plan in 2016 is to have Clinton try to “connect with real people” better than she did eight years ago, according to a Democratic official with knowledge the announcement plans and strategy.

Clinton started the campaign clock ticking last week when her team signed a lease for a massive new campaign headquarters at Pierrepont Plaza in Brooklyn, New York that occupies at least two floors. The campaign has at least 35 staffers in New York City alone.

That action by Team Clinton means that by FEC rules, she has 15 days since the signing of the lease to file the paperwork officially for a 2016 presidential run because her expenditure on the lease was purportedly over $5,000.

Sources said the bulk of Clinton staffers who have been hired already started moving into the campaign headquarters in Brooklyn this past Wednesday -- another sign the announcement is imminent.

The Clinton campaign continues to scoop up key campaign operatives, with both Karen Finney and Oren Shur recently joining her VIP team. Finney will work as strategic communications adviser, and Shur as director of paid media, according to a Clinton spokesperson.

Fox News’ Ed Henry and Serafin Gomez and The Associated Press contributed to this report.