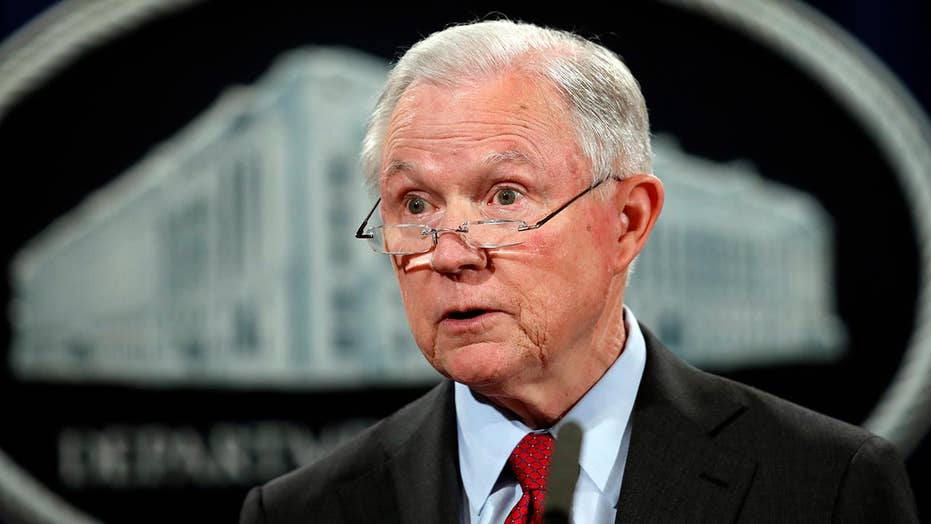 California fires back a day after the announcement of the lawsuit. What can we expect moving ahead?

Attorney General Jeff Sessions on Saturday slammed “activist judges,” whom he accused of overreaching and paralyzing the government by shutting down Trump-era policies they object to via nationwide injunctions.

At a Federalist Society event at Georgetown University, Sessions blasted judges who have shut down controversial Trump-era policies such as denying funding for so-called “sanctuary cities” and repealing the Deferred Action for Childhood Arrivals (DACA) program.

“The court is not superior; the court does not get to have the final word in every dispute, give me a break,” he said.

He said the vehicle of choice for "activist judges" is nationwide injunctions -- orders that block the federal government from enforcing a law or policy across the entire country.

"It would be fitting to call them nonparty injunctions or limitless injunctions, since they bind all of America and grant relief to those who are not parties to the case," he said.

Sessions speaks out about California and immigration law

According to Sessions, President Donald Trump has been hit with 22 such injunctions since he took office, on issues such as transgender people in the military, DACA, sanctuary cities and the travel ban. He complained that the practice meant that one federal judge out of 600 can shut down a federal policy across the U.S., even if others agree with the government.

“It’s a question often of pure, raw power -- who decides?” he said, accusing judges of turning themselves into "super-legislators."

SESSIONS DEFENDS DECISION TO RECUSE HIMSELF FROM RUSSIAN PROBE

Sessions argued that such moves are done to implement “a policy outcome that could never be won at the ballot box or in the legislature,” and also cut off further discussion among lower courts.

As an example of this overreach, he cited in particular the DACA issue, where judges in San Francisco and New York issued injunctions which keeping parts of it in place. Sessions noted that a Maryland judge subsequently sided with the administration, but the plaintiffs in that case got relief anyway via the New York and San Francisco lawsuits.

DACA is the immigration policy that allowed some individuals who entered the country as minors to receive a renewable deferral from deportation and be eligible for work permits.

Sessions also noted the administration's restriction of federal grants from so-called “sanctuary cities” -- states that won't cooperate with federal immigration officials -- which was also blocked by a federal judge.

“Normally this would be a discrete decision affecting only one city’s grant and we would correct it on appeal in due course, it wouldn’t affect the whole country,” he said. “But instead of issuing an injunction for that city, the judge enjoined the federal government from imposing these conditions on any state or city across the entire nation, including those that agree with our position and don’t want this relief.”

“There can be no question that courts should put an end to nationwide injunctions and keep activists on both sides of the aisle from paralyzing the functioning of our government,” he said.