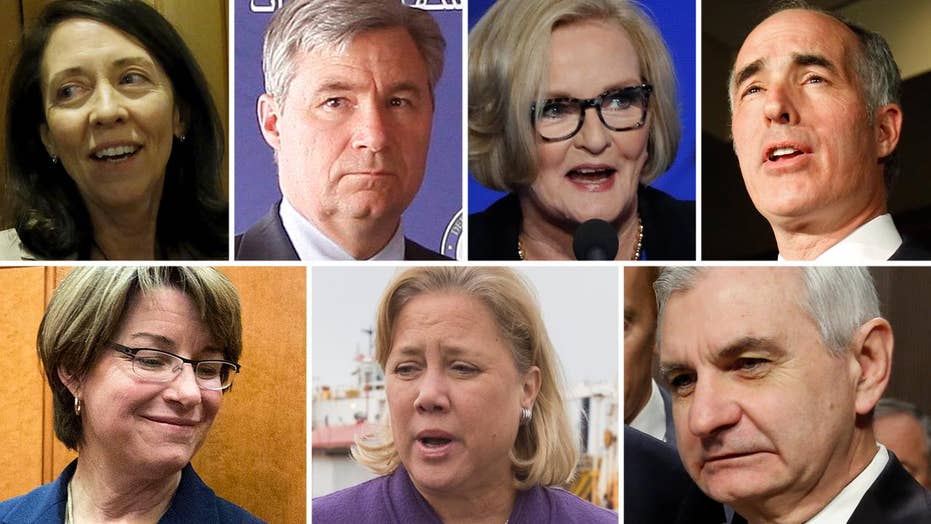 Democrats were aghast after learning Attorney General Jeff Sessions met twice, as a senator, with Russia’s ambassador to the U.S. without telling Congress at his confirmation hearing – but it turns out Sergey Kislyak is no stranger to lawmakers on both sides of the aisle.

The longtime Russian ambassador met with seven then-Democratic senators in a single sit-down in 2013, among other discussions – and reportedly was a frequent visitor to the Obama White House.

As House Speaker Paul Ryan put it Thursday, “We meet with ambassadors all the time.”

But some Sessions critics nevertheless portrayed meetings with Kislyak, whose country was accused of meddling in the 2016 campaign, as a rare summit, particularly for a member of the Senate Armed Services Committee like Sessions.

The most forceful such statement came from Sen. Claire McCaskill, D-Mo., who tweeted that she had “been on the Armed Services Com for 10 years. No call or meeting w/Russian ambassador. Ever. Ambassadors call members of Foreign Rel Com.”

That was quickly proven untrue.

A pair of tweets first unearthed by National Review’s Charles C.W. Cooke showed McCaskill twice wrote messages about meetings with Kislyak, in 2013 and 2015.

“Off to meeting w/Russian Ambassador. Upset about the arbitrary/cruel decision to end all U.S. adoptions, even those in process,” McCaskill tweeted on Jan. 30, 2013.

McCaskill later blamed Twitter's character limit for the seeming disparity in her claims, suggesting the limit prevented her from being more specific in Thursday's tweet. She told The Weekly Standard there was “no contradiction,” and clarified she never had a “one-on-one meeting” with the ambassador.

McCaskill’s 2013 meeting was the one involving a total of seven Democratic senators. She joined several Republicans and six other Democratic senators that day in an appeal to Kislyak for Moscow to reverse its blockade of U.S. adoptions of Russian children.

Other Democratic senators in that meeting were: Sens. Mary Landrieu of Louisiana, Maria Cantwell of Washington, Amy Klobuchar of Minnesota, Jack Reed of Rhode Island, Robert Casey of Pennsylvania and Sheldon Whitehouse of Rhode Island.

Klobuchar said in a statement afterward that she was able to tell Kislyak the stories of families she met in Minnesota. Landrieu is no longer a senator after losing her seat in 2014.

“We should start an immediate investigation into @SenSchumer and his ties to Russia and Putin. A total hypocrite!” Trump tweeted.

We should start an immediate investigation into @SenSchumer and his ties to Russia and Putin. A total hypocrite! pic.twitter.com/Ik3yqjHzsA

Schumer tweeted back: “Happily talk re: my contact w Mr. Putin & his associates, took place in '03 in full view of press & public under oath. Would you &your team?”

While Putin has had contact with U.S. officials for decades, Kislyak also would be a familiar face for longtime Washington lawmakers. He’s been the ambassador to the U.S. since 2008, and served in various posts representing the former Soviet Union in the 1980s.

“I’ve met with the Russian ambassador with a group, in my capacity, with a group of other senators,” Sen. Joe Manchin, D-W.Va., told CNN. “That’s in my official capacity. That’s nothing. That’s my job.”

Meanwhile, The Daily Caller reported that Kislyak is listed as visiting the White House at least 22 times between 2009 and 2016. They likely were a mix of personal meetings and group visits. Roughly half of the visits involved broader receptions with other visitors.

Sessions, at his press conference, downplayed any intrigue behind his meetings with the ambassador last year, including one in September at his office. He said they discussed terrorism and Ukraine, among other topics.

Sessions, in trying to tamp down the controversy, announced he would recuse himself from any investigations pertaining to the campaign, amid bipartisan pressure to separate himself from probes regarding Russian meddling in the race.

But some Democrats are still calling for his resignation, and a special prosecutor.

“It is insufficient for Attorney General Sessions to recuse himself from any matters concerning the presidential campaign. He must resign,” House Democratic Whip Steny Hoyer said in a statement late Thursday.