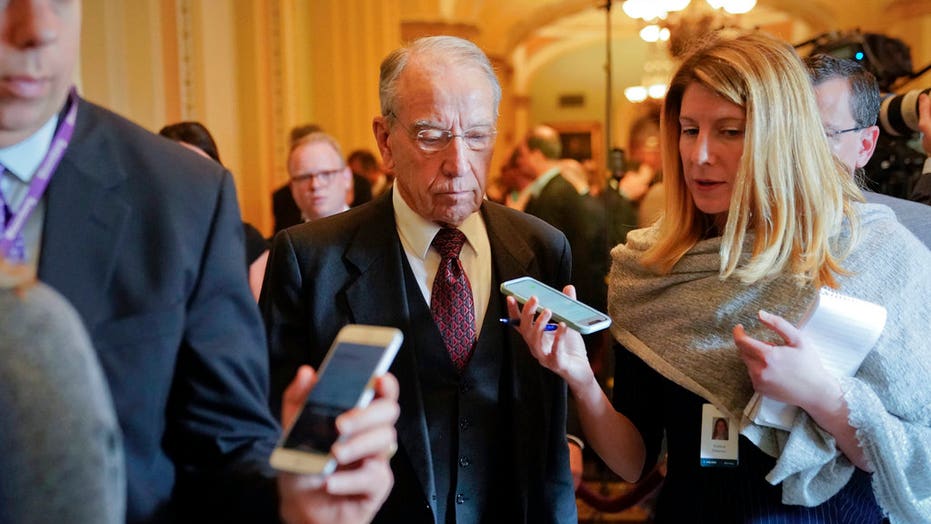 Two Republican senators -- Chuck Grassley of Iowa and Ron Johnson of Wisconsin -- want to know from Intelligence Community Inspector General Michael Atkinson whether he is looking into the leaks of classified information about President Trump's July call to Ukrainian President Volodymyr Zelensky.

The Wednesday letter expresses concern about news outlets using anonymous sources to report on information that was classified at the time. It also asks Atkinson to provide full answers to a letter the senators sent in May asking about leaks related to former FBI employees Peter Strzok and Lisa Page and the probe into 2016 Russian election interference.

"In response to our May 6, 2019, letter, although you shared in our concern about the harms posed by leaks during the Russia investigation, you refused to confirm or deny the existence of an investigation," the senators wrote. "We request that you show the same transparency that you and the White House have shown with respect to making the IC complaint’s allegations and supporting documentation public."

Specifically, Grassley and Johnson mention the transcript of Trump's phone call with Zelensky and the whistleblower complaint filed on Aug. 12, which alleged Trump pressured Zelensky to investigate former Vice President Joe Biden's family on that phone call. The transcript was declassified and released on Sept. 25 and the complaint was not officially made public until Sept. 26. The senators point to several news stories citing anonymous sources between Sept. 19 and Sept. 21, however, that made the information public while it was still classified.

"There was only a finite amount of individuals that had access to the complaint and phone call transcript," Johnson and Grassley wrote. "Reports also purportedly revealed private information about the identity of the whistleblower, contrary to the strong rebuke from his/her attorneys."

Trump himself tweeted about the leaks on Sept. 21, quoting Judicial Watch President Tom Fitton, who called the leaks "criminal."

The senators also ask Atkinson to respond more directly to their May letter — specifically on whether or not the ICIG's office was investigating agencies "leaking like mad," as Strzok wrote to Page in a Dec. 2016 message — and to provide information on his office's handling of the Ukraine matter:

"1. Are you investigating the classified leaks related to the IC complaint and Ukraine call? If not, why not?

"2. How many people within your office had access to the complaint and call transcript before they were made public?"

Atkinson will appear before the House Intelligence Community for a closed briefing on Friday. Republicans have also pressed the ICIG on apparent changes made to the whistleblower complaint form used to advance the allegations against Trump, dropping the requirement for "first-hand information."

Republicans told Atkinson in a Sept. 30 letter asking about the complaint form that their message was a "preservation order for all documents and communications from your office related to the matters discussed herein."

Atkinson said in a statement the same day that the changes were made to reflect the fact that first-hand information was not required to file an urgent complaint.