The key states most likely to decide who wins the White House, Senate

Control of the Senate is up for grabs Tuesday with Democrats, armed with record-breaking fundraising war chests, optimistic about flipping several seats and Republicans working hard to keep it as a firewall from a blue wave.

Democrats are expected to cut into the Republicans' 53-seat majority, but it could be a nail-biter in some critical toss-up states to determine whether they win enough races to wrestle back control of the upper chamber for the first time since 2014.

Senate Majority Leader Mitch McConnell, R-Ky., has acknowledged the GOP majority is on the line, with so many Republicans playing defense this election. Twelve GOP incumbents have competitive races Tuesday, whereas only two Democrats are in jeopardy.

“It's a 50-50 proposition," McConnell said Wednesday of the odds of keeping the Senate red. "We have a lot of exposure. This is a huge Republican class. ... There are dogfights all over the country."

Republicans are fighting to hold a slim 53-47 majority. Democrats need a net gain of three seats and the White House to win back the majority — or four seats if President Trump is reelected. 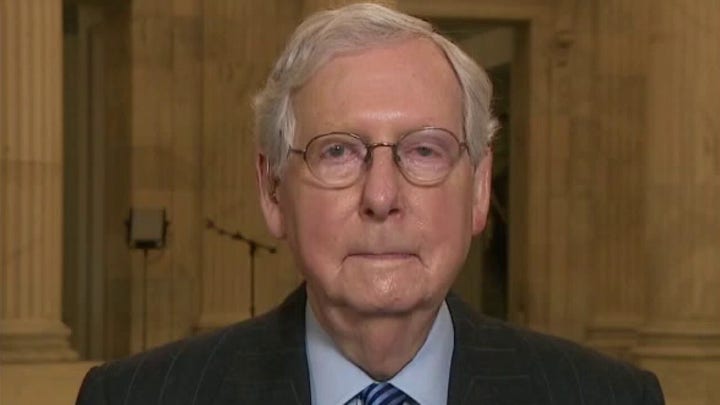 The Cook Political Report projects Democrats will win between two and seven seats. If it's only two, Republicans still are in control. Inside Elections, another nonpartisan election analysis outlet, gives a rosier outlook for Democrats with a net gain of four to six seats -- enough to win the majority. And FiveThirtyEight's election forecasts also found Democrats are favored to win the majority with a 77 in 100 shot.

"Democrats are a favorite at this point," Jessica Taylor, senate editor at the Cook Political Report, told Fox News. "[There are] 12 Republican-held seats that are considered competitive to just two for Democrats. Republicans were always going to start with a disadvantage this cycle.

"And what has happened is that Democrats have put seats in play that we did not expect to be competitive, like Iowa, like Montana, South Carolina, Kansas," Taylor continued.

The places where Democrats have their best pick-up opportunities are against Sens. Cory Gardner in Colorado, Martha McSally in Arizona, Thom Tillis in North Carolina and Susan Collins in Maine.

But elections analysts see quite a few other openings for Democrats to expand their gains and it will depend in large part on how well President Trump fares in their states. An erosion of Trump's support could be enough for a Democrat to win in a more traditionally red state. Democrats have been buoyed by record-breaking fundraising numbers, with South Carolina's Jaime Harrison raising $57 million in the final quarter before the election in his bid to unseat Sen. Lindsey Graham, R-S.C.

The so-called toss-up Senate races are against Sens. Steve Daines in Montana, Joni Ernst in Iowa and David Perdue in Georgia. Democrats also are running competitively against Graham in South Carolina; in an open seat in Kansas to succeed Sen. Pat Roberts; and, in Georgia, Sen. Kelly Loeffler is facing a huge jungle special election.

SEN. GRAHAM, POWERFUL TRUMP ALLY, MAY BE 'IN TROUBLE' WITH REELECTION IN SOUTH CAROLINA

The stakes are incredibly high in Georgia for the two senate seats that could be decisive for the control of the Senate.

In the special election, 20 candidates are vying to fill out the remainder of retired Sen. Johnny Isakson's term. Georgia Gov. Brian Kemp appointed Kelly Loeffler, co-owner of the WNBA's Atlanta Dream, to fill the seat until the election. She's in a tough battle for the GOP vote with Rep. Doug Collins, R-Ga. Meanwhile, Democrat Raphael Warnock, pastor at Ebenezer Baptist Church, is leading the field for Democrats. It's unlikely anyone will get 50% of the vote in this race, meaning the top two finishers will head to a runoff race on Jan. 5.

In the regularly planned Georgia race, Perdue is virtually tied with Democrat Jon Ossoff, a media company executive who previously lost a congressional race in Georgia. If neither Perdue nor Ossoff get over 50% of the vote on Tuesday, they would head to a runoff election on Jan. 5 without the Libertarian candidate Shane Hazel on the ballot.

So if Senate control is a cliff-hanger after Tuesday, the outcome could hinge on possibly two runoff elections decided two days after the new Senate would be sworn in on Jan. 3.

"It's pretty clear that on January 3 there will be at least one vacancy and there could well be two," said Jacob Rubashkin, a reporter/analyst for Inside Elections, a nonpartisan newsletter in Washington, D.C. "And given the way 2020 has gone, maybe those will be dispositive for the Senate majority."

Sen. John Cornyn in Texas and Sen. Dan Sullivan in Alaska are also in competitive races in two traditionally red states. Though they are still favored to win reelection, they may be vulnerable if Trump's support slumps in a blue wave.

Sen. John Cornyn, R-Texas arrives for the continuation of the Senate impeachment trial of President Trump at the U.S. Capitol in Washington. Cornyn blamed China and the Chinese culture for the coronavirus pandemic while speaking with reporters Wednesday. (REUTERS/Erin Scott)

"There is an entire tier of Republican seats, where if the president's support drops --even just a little bit -- they all go," he added.

The Democrat most likely to lose Tuesday is Alabama Sen. Doug Jones, who faces a formidable challenger in former college football coach Tommy Tuberville. Jones was surprisingly elected to the Senate from a deep red state during a 2017 special election by defeating Republican Roy Moore, who faced accusations of sexual assault and misconduct against teenage girls.

Republicans are also eyeing Michigan as their other potential pick-up opportunity, but it's a much heavier lift to defeat Sen. Gary Peters, D-Mich., in a state where Joe Biden has a good shot at winning and Peters has been consistently ahead in polling averages. Republican businessman and Army combat veteran John James lost to Sen. Debbie Stabenow, D-Mich., in 2018 and he's looking to pick away support from Biden voters on Tuesday.

Peters campaigned with Biden and former President Barack Obama on Saturday stressing that the path to a Democratic victory in the Senate and the White House goes straight through Michigan. He urged Democrats not to have the same regrets they did in 2016 when Trump won the state by less than 11,000 votes.

"We have a real shot to take the majority in the United States Senate," Peters said in Flint Saturday. "But one thing we must do is we must win here. We must hold this seat."

Democrats do have a real shot at making a clean sweep of the House, White House and Senate on Tuesday, but of the three, political handicappers project that flipping the Senate is the most difficult for Democrats.

"This is still the one that isn't as solid," Taylor said of projections of Democrats taking control of the Senate.

One reason is that control of the upper chamber hinges on Trump's ability to hold states he won in 2016 and retain convincing margins of victory in those red states.

There's been a decline in split-ticket voting. In 2016, every single Senate race went to the same party as the presidential race did in that state.

And since 2012, 122 of 139 Senate races have gone the same way the presidential race did in their state, Taylor noted.

Democrats are running a campaign to protect access to health care during the coronavirus pandemic and they've had the money to compete in traditionally red states, buoyed by grassroots activism and donations in the wake of Justice Ruth Bader Ginsburg's death. They believe they have many paths to the majority.

"Democrats have expanded the map and put more Republican seats in play with strong challengers powered by record-breaking grassroots enthusiasm and focusing on the issues that matter to voters, like access to health care," said Helen Kalla, rapid response director of the Democratic Senatorial Campaign Committee. "Vulnerable Republican incumbents can’t escape their toxic records of voting to gut protections for people with pre-existing conditions and enabling the Trump administration’s disastrous pandemic response, and voters are ready to send new leadership to Washington."

Senate Republicans are running on a message of accomplishment -- approving three conservative Supreme Court justices, passing criminal justice reform and cutting taxes. They've positioned the Senate as the necessary firewall to a liberal takeover and pitched the slogan: "Hold the line."

McConnell has warned that, if Democrats win, they'll usher in radical reforms such as packing the Supreme Court, ending the filibuster and creating two new states in Washington, D.C. and Puerto Rico.

"If you look at the Democratic Party today, you ought to be frightened," McConnell said Wednesday.