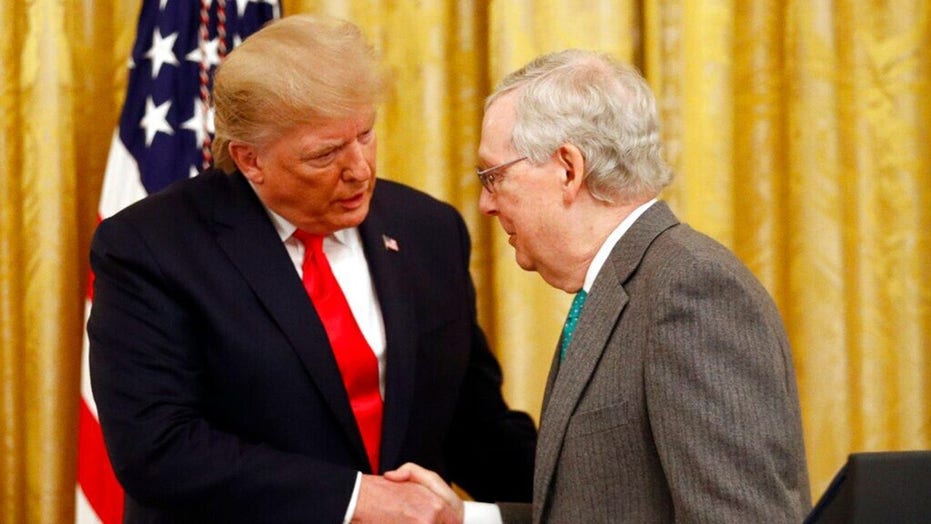 This is one of the crowning achievements of the Trump presidency, Judicial Crisis Network's Carrie Severino says.

"No vacancy left behind."

That quote, repeated over and over by Senate Majority Leader Mitch McConnell, R-Ky., in the past year -- to cheers from Republicans and the outrage of Democrats -- has been the creed behind the Senate's single-minded push to confirm as many Trump-nominated federal judges as possible. And the 52-48 confirmation of Cory Wilson to the U.S. Court of Appeals for the Fifth Circuit on Wednesday means that McConnell, in one respect, has quite literally accomplished that goal.

Wilson fills the final remaining federal circuit court vacancy. None have been left behind.

Wilson also marks the 200th overall lifetime-appointed Article III judge to be confirmed by the Senate during Trump's presidency. Article III courts include federal district courts, circuit courts of appeals, the Supreme Court and the U.S. Court of International Trade. That pace is faster than every other president in history except for Jimmy Carter. President Trump's appointees now make up more than one-quarter of the federal judiciary -- a legacy that will long outlast him and McConnell, the author of a memoir titled "The Long Game."

"The single most consequential thing we can do is these lifetime appointments of men and women to the court who believe that the job of a judge is to follow the law," McConnell told the annual Values Voter conference in 2018.

And on Wednesday, McConnell said on the floor of the Senate that, "[o]nce we confirm Judge Wilson today, the Senate will have confirmed 200, 200 of President Trump's nominees to lifetime appointments on the federal bench. And following number 200, when we depart this chamber today, there will not be a single circuit court vacancy in the country anywhere in the nation for the first time in at least 40 years."

The majority leader also took a shot at Democrats, who have opposed Trump's judicial nominees at an unprecedented rate.

"Our work with the administration to renew our federal courts is not a partisan or political victory," McConnell said. "It's a victory for the rule of law and for the constitution itself. If judges applying the law and the constitution as they're written strikes any of our colleagues as a threat to their political agenda, then the problem, I would argue, is with their agenda."

And the judges McConnell is confirming will likely remain at their posts for decades. Wilson is 49 years old. Justin Walker, who the Senate last week confirmed to the D.C. Circuit, is just 38.

Wilson, like many of the Trump nominees to the influential federal courts of appeals, which are just one step below the Supreme Court, has been zealously opposed by Democrats.

"Judicial nominee Cory Wilson called the Affordable Care Act 'illegitimate' & 'perverse,'" Sen. Sheldon Whitehouse, D-R.I., tweeted Tuesday. "He called the NAACP’s concerns about Voter ID laws 'poppycock.' He called groups like the ACLU 'rent-a-mobs.' I call him unqualified & will be voting no on his nomination."

He's also been slammed by outside left-leaning outside groups like the Leadership Conference on Civil and Human Rights, which criticized the Senate for taking up floor time with judicial confirmations during a pandemic and national racial unrest.

"The Senate should not consider Mr. Wilson’s nomination – or any judicial nomination – at this perilous time in our nation’s history, when the Senate should be laser focused on efforts to save lives and mitigate the profound economic turmoil of COVID-19 on the American people," a letter written by the group's president and CEO Vanita Gupta read. "It is especially disturbing that the Senate would process judicial nominees like Mr. Wilson who seek to dismantle health care protections for vulnerable people."

But right-leaning court watchers have defended the focus on judges, saying that the Senate can proverbially walk and chew gum at the same time -- the body soon after Wilson's confirmation is taking a procedural vote to begin debate on a police reform bill that Democrats will likely block. On Wednesday, they celebrated the confirmation of Trump's 200th judge.

"We have reached a HISTORIC MILESTONE of 200 confirmed judges thanks to @RealDonaldTrump, @SenateMajLdr, @ChuckGrassley, and @LindsayGrahamSC," Judicial Crisis Network President Carrie Severino tweeted Wednesday. "[Trump] has DELIVERED on his promise to appoint constitutionalist judges, saving us from hundreds of policy-driven, liberal judges that a President Hillary Clinton surely would have appointed."

Mike Davis, the president of the Article III Project -- a group dedicated to boosting Trump judicial nominees -- and a former staffer for Sen. Chuck Grassley, R-Iowa, from his time as the Senate Judiciary Committee chairman, emphasized Trump's comparative success in confirming judges to his predecessor.

And Davis' old boss, Grassley, credited Trump with keeping a campaign promise in giving the Senate so many judges to confirm.

"These have been nominees in Justice Scalia's mold, just as the president promised nearly four years ago," Grassley said on the Senate floor Wednesday. "This landmark achievement is the result of the president keeping his word."

And during a time of race and pandemic-related turmoil with polls showing him trailing Democratic rival Joe Biden in his reelection race, Trump apparently senses that judicial appoints is one issue that is favorable to him. He's promised by later this summer to release a new list of potential Supreme Court nominees -- a move that helped unite the Republican party around him in 2016.

But Biden on Tuesday continued criticism of Trump, his nominees and Senate Republicans. The presumptive Democratic presidential nominee has yet to release a list of potential Supreme Court nominees like Trump's, despite urging from some factions in his party.

"Instead of passing police reform or helping hardworking Americans get through this crisis, Republicans are jamming through another one of Trump’s unqualified nominees," Biden said. "It's wrong. Cory Wilson lacks judicial temperament and experience—and has no place on a Federal Court."