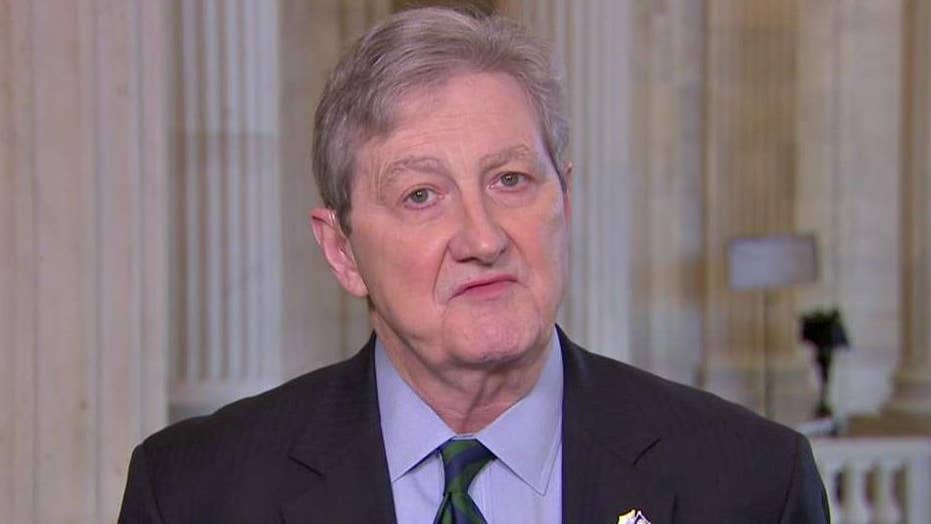 Sen. Kennedy asks Trump to declassify all documents on FBI's involvement in 2016 election

Sen. John Kennedy, R-La., is calling on President Trump to declassify all documents pertaining to the FBI’s involvement in the 2016 election and is calling on Democrats to move on from the Mueller report.

“If our chairman was to conduct hearings I would attend and I’d ask questions. I would respectfully suggest as a precursor to that, that the president… declassify, rather, all documents pertaining to the FBI’s involvement to the 2016 election,” Kennedy said on “America’s Newsroom.”

“Here’s what I believe, I think the FBI is the premier law enforcement agency in the history of the world but i think there was some bad apples over there. There still may be. I think some of them acted on their political beliefs, some tried to hurt Trump, some tried to hurt Clinton. All I want for those people is a way, we need to get rid of them.”

Kennedy added: “If the president will declassify those documents and let everybody see them, who did what to whom, who tried to manipulate the election, then the American people will be able to make up their mind.”

The Louisiana senator called for the president to redact what needs to be redacted but ultimately called for the entire documents to be released so that important questions could be answered.

ANDREW MCCARTHY: HOW LONG HAS MUELLER KNOWN THERE WAS NO COLLUSION

Co-host Sandra Smith asked Kennedy about the Mueller report which he said was thorough.

“This thing was a cross between an endoscopy and a colonoscopy,” Kennedy said.  “After all of this effort, Mr. Mueller concluded there was no collusion. The obstruction of justice allegations appeared to be a little closer call for him but he didn’t recommend an indictment. Now, as far as I’m concerned this is over in terms of the hearings and judiciary.”

Kennedy called on Democrats to move on to other pressing matters.