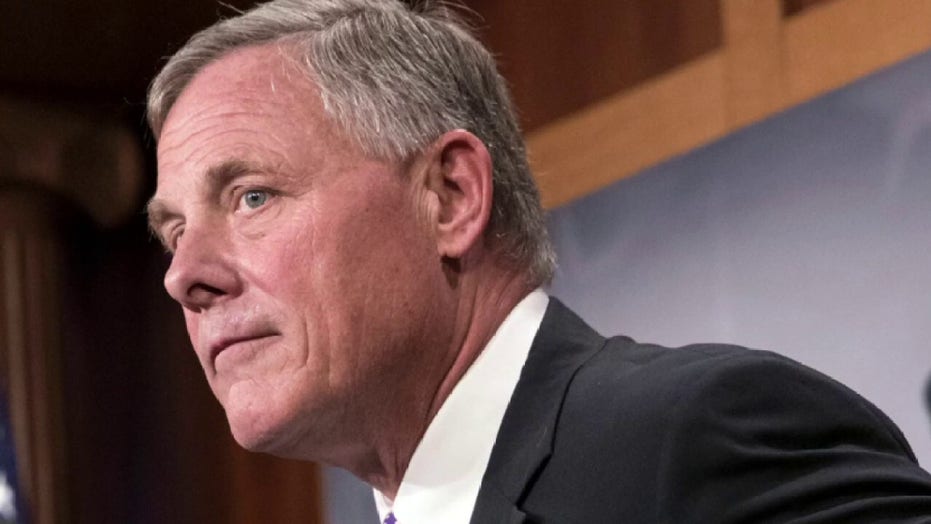 Republican Sen. Richard Burr has stepped aside as chairman of the Senate Intelligence Committee amid an investigation into his stock sales during the early stages of the coronavirus outbreak.

“Senator Burr contacted me this morning to inform me of his decision to step aside as Chairman of the Intelligence Committee during the pendency of the investigation. We agreed that this decision would be in the best interests of the committee and will be effective at the end of the day tomorrow.”

Later, Burr confirmed that he would be stepping aside.

“This morning, I informed Majority Leader McConnell that I have made the decision to step aside as Chairman of the Senate Intelligence Committee until this investigation is resolved," Burr said in a statement Thursday. "The work the Intelligence Committee and its members do is too important to risk hindering in any way. I believe this step is necessary to allow the Committee to continue its essential work free of external distractions.”

Burr's attorney said Thursday afternoon the senator is "cooperating" with the inquiry.

“When the issue arose, Senator Burr immediately asked the Senate Ethics Committee to conduct a complete review,” said attorney Alice Fisher. “He has also been actively cooperating with the government’s inquiry, as he said he would. From the outset, Senator Burr has been focused on an appropriate and thorough review of the facts in this matter, which will establish that his actions were appropriate.”

The move comes after federal agents on Wednesday served a search warrant to Sen. Burr, R-N.C., at his Washington-area home. A law enforcement official familiar with the investigation confirmed to Fox News that FBI agents also confiscated the senator's cellphone.

According to a senior DOJ official, the warrant was served on Burr’s lawyer and was approved at the highest levels of the department.

The Los Angeles Times first reported these details. One official reportedly said agents served an earlier warrant to obtain information from the senator’s iCloud account. A law enforcement source told the paper that the Justice Department was reviewing communication between Burr and his broker.

The FBI has not commented.

Burr has denied any wrongdoing and requested an ethics review of the sales.

It comes as Fox News has confirmed the Senate Intelligence Committee is expected to vote on and advance Texas Republican Rep. John Ratcliffe’s nomination to be the next Director of National Intelligence next Tuesday, May 19th. It is not clear who will chair that meeting after the news involving Burr, as Majority Leader Mitch McConnell was non-committal during an interview Thursday on Fox News.

Suspicions arose last month after it was revealed that several senators dumped stocks prior to the coronavirus pandemic upending the global economy. The FBI reportedly reached out to Burr to discuss the sale of as much as $1.7 million in stocks.

In March, Burr’s attorney, Alice Fisher of Latham & Watkins, said in a statement to Fox News that the senator welcomed any review of his stock sales.

That report, citing a public financial disclosure form from Burr's brother-in-law Gerald Fauth -- who serves on the National Mediation Board (NMB) -- revealed that he sold between $97,000 and $280,000 worth of stocks in a total of six transactions on Feb. 13, 2020. Burr's sales that day reportedly led to the Securities and Exchange Commission investigating whether non-public information played a role, which his attorney denies.

Besides Burr, the Daily Beast reported that Sen. Kelly Loeffler, R-Ga., and her husband sold stock on Jan. 24, the same day she sat in on a closed-door coronavirus briefing as a member of the Senate Health Committee with the Trump administration and with Dr. Anthony Fauci in attendance.

“If you actually look at the personal transaction reports that were filed, it notices at the bottom that I’m only informed of my transactions after they occur — several weeks,” Loeffler said at the time. “So, certainly, those transactions — at least on my behalf — were a mix of buys and sells. Very routine for my portfolio.”

Rep.  Doug Collins, R-Ga., who is facing off against Loeffler for the Senate seat, seized on the latest Burr report and tweeted for the senator to "call her office."